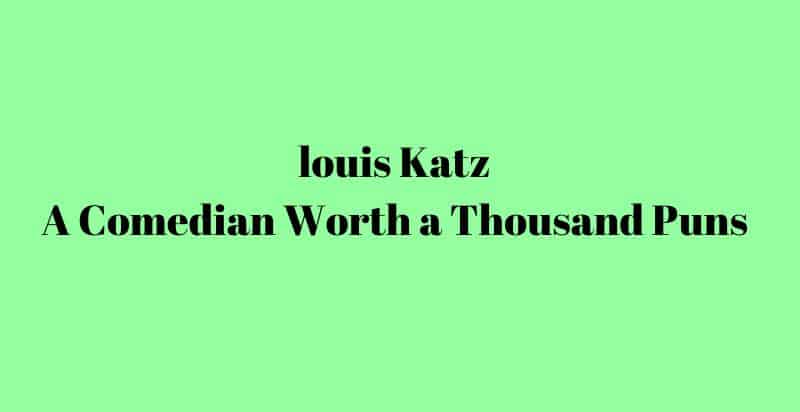 Louis Katz is an up-and-coming American standup comedian, writer, and podcast host who grew up in Los Angeles, CA. The artist is known for his unique comedy style which skillfully combines the lowbrow and highbrow styles of comedy, giving listeners something they are likely not to have heard before.

His unprecedented comedy style coupled with his unfiltered and adult jokes has earned his comedy style the name “Cerebral Filth.”

Outlined below are 8 facts about Louis Katz that will help you understand just how talented the man really is. So, without further ado, let’s dive in.

8 Awesome Facts You Should Know about Louis Katz

1. Louis Katz Was Featured on This Is Not Happening

This Is Not Happening is an American comedy series created by comedy central. The series involves the host – the comedian and TV host Ari Shaffir – inviting his comedian friends onstage to recount their side splitting true stories that center around a pre-selected specific theme and leaving the audience roaring with laughter.

The show first aired on January 16, 2015, and to date has released 40 episodes in 4 seasons. Naturally, a number of talented comedians have made their appearances on the show, making it one of the most hit comedy central productions so far.

Louis Katz appeared on the show on February 10, 2018, where he performed one of his hilarious uncensored scripts, which focused on him getting cheated on and his night out with a gothic woman.

2. The Comedic Man Boasts His Own Comedy Album

Being an exceptional comedian through and through, Louis Katz has composed his own comedy album by the name of KATZKILLS. The album was released back in 2018 and comprises 21 short comedy scripts, most of which last only between 1 to 3 minutes. The album deftly portrays Katz’s unique comedy style in which he tackles a variety of unrelated and unusual topics.

The album is available on almost all major music streaming channels such as Spotify, Apple Music, Amazon Music, and even on YouTube. The album fared pretty well in the comedy industry testifying to Katz’s knack for comedy. Vulture ranked the comedy album among the top 5 comedy albums of the year and labeled it as “a raucous comedy party.”

3. Katz Has Been Praised by Many Other Artists and Fellow Comedians

What more could a person need to prove their worth as a capable standup comedian than the praise and acknowledgment of other comedians and artists. Louis’ comic prowess has, on several occasions, been acknowledged and praised by industry legends such as Dave Attell, who recognized him as one of the best joke writers currently working in the industry.

Ali Wong – another talented American comedian – stated that Louis is one of the most prolific and hilarious comedians she knows. “His special and album are comical,” Marc Maron said on his WTF program about Louis. However, he was best praised by Doug Stanhope, who said that “Katz is humorous to the point where Hitler would’ve given him a sleeper car on the train.”

4. The Comedian’s Standup Has Been Featured on Many Popular Channels and Platforms

You know that a comedian must be really good when major television channels feature their acts and performances. Louis Katz’s boundless talent for comedy and scriptwriting is evident from the fact that channels such as NBC and HBO featured his standup performances.

In fact, Katz’s standup acts were broadcasted on comedy central five times which includes his appearance on their comedy show This is Not Happening as well as his half-hour comedy special. All of which have collectively amassed a staggering 2.7 million views on YouTube.

The comedian, bent on taking his comedy career up a notch, released his first-ever comedy album back in March 8, 2011. The album was called If These Balls Could Talk and comprised 25 short comedy scripts. The comedy album covered a range of strange topics such as pride, smelling things, married friends, and the world’s shortest joke.

The album is available on all major music streaming apps such as Apple Music, Spotify, and Youtube.

6. Katz Has Performed on Comedy Underground with Dave Attell

Comedy Underground with Dave Attell is a comedy TV series hosted by the legendary American standup comedian Dave Attell. In each episode of the show, various new comedy talents as well Dave’s old friends, are invited onstage to perform unfiltered and uncensored comedy scripts in their rawest.

The show has featured some big comedy names such as Amy Schumer, Pete Davidson, Jeff Ross, and Jim Norton. The show lasted for only eight episodes and one season.

Louis was featured on the sixth episode of the show on May 17, 2014. He performed alongside other fellow comedians, including Luenell, Robert Kelly, and special guests Jim Norton and Farrah Abraham.

Tom Rhodes Smart Camp is a podcast series hosted by the comedy veteran himself, Tom Rhodes. The host has been doing comedy for over 30 years and loves to share the experiences he has garnered over the years with the listeners and his guest invites.

The show first aired on March 16, 2011, and is still in production. The podcast series has released 354 great episodes, with many more to come in the future. Louis Katz was featured on the show on January 16, 2015. In this 1-hour-20-minute podcast episode, the two standup comedians talked about their current lives as well as their past experiences that they had during their travels.

8. The Comedian Also is a Great Podcast Host

To call Louis multitalented would be an understatement. Not only is the man a great standup comedian and joke writer, he’s also an exceptional podcast host. Don’t believe us? See for yourself by tuning into to his podcast show Road Heads with Louis Katz & Matt Fulchiron.

Louis Katz and his co-host Matt Fulchiron, both being comedians, know what it’s like to be on the road for days on end. And so, the two hosts, along with distinguished guests, share with their listeners stories about their life while in transit and also put a few pro-level traveling tips out there for the listeners.

The first episode of the show aired on October 10, 2019, while the last one came out on October 18, 2020. The show has seen a total of 44 episodes and has featured several renowned guests such as Claude Stuart, Eric Edwards, and Darren Carter.

Gene Pompa – The Multitalented Comedian You Should Keep an Eye on

Louis Katz – Louis and the Tramp – This Is Not Happening – Uncensored

After a particularly bad breakup, Louis Katz falls in love with a giant drug-addicted homeless girl in Portland, Oregon.

Calling the man hilarious would be to say the least. His performances and albums have been widely acknowledged by other fellow comedians and institutions. Not to forget that the man has never once failed in leaving his audience rolling with laughter.

We can say with certainty that the future looks bright for the comedian. Be sure to check out his work and revel in the comical goodness of his performances.

Liz Miele – A Comedian Who Doesn’t Let Dyslexia Get in the Way of Being Hilarious!