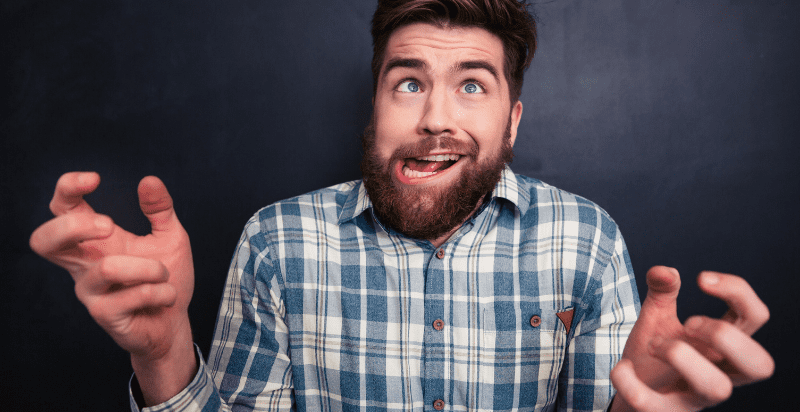 You asked it and here it is –  our collection of the most hilarious Moron jokes that will make you laugh out loud.

Jokes about Morons and Dimwits

A woman walks into a bar carrying a duck under her arm. The bartender asks “Hey where did you get that pig”? The woman replies “This is not a pig it’s a duck, you moron.” “I know I was talking to the duck.

How did the moron fall on the floor?
He tripped over the cordless phone!

Why did the moron climb the glass wall?
To see what was on the other side!

Why was the moron hitting his head against the wall?
Because it felt so good when he stopped !

Why did the moron going to the airport turn around and go home?
Because he saw the sign that said “Airport Left”!

What do you call 12 morons at the bottom of a pool?
An air pocket!

Why did the moron throw the butter out the window?  He wanted to see a butterfly.

How do you drown a moron?
Put scratch-n-sniff stickers at the bottom of the pool!

How did the moron try to kill a fish?
He tried to drown it!

Why did the moron drive his truck off the bridge?
He wanted to check his airbrakes!

Why did the moron tiptoe past the medicine cabinet?
He didn’t want to wake the sleeping pills!

How many morons does it take to screw in a light bulb?
3…one to hold the bulb, and 2 to turn the chair!

Why did it take the moron an hour to eat breakfast?
Because the orange juice carton said Concentrate!

Why did the moron open the refrigerator door?
He wanted to see the salad dressing!

What did the moron say when her husband called her on her cell phone?
How did you know I was at Wal Mart?

What did the moron say when he put a quarter in the parking meter?
Hey! Where is my gumball!

How do you know when a moron has been making chocolate chip cookies?
There are M&M; shells on the floor!

What do you do if a moron throws a grenade at you?
Pull the pin and throw it back!

Did you hear about the moron that got an AM radio?
It took him a month to realize he could play it at night!

How do you confuse a moron?
Put him in a round room and tell him to sit in the corner!

If a moron & an idiot fell off a building, who would land first?
The idiot…the moron would stop and ask for directions!

How can you tell when a moron has been using the computer?
There is white-out all over the screen!

What did the moron say when he saw Cheerios?
Oh Look, Doughnut seeds!

How do you keep a moron in suspense?
I’ll tell you tomorrow!

How did the moron break his arm while raking leaves?
He fell out of the tree!

How do you get a moron out of a tree?
Wave at him!

Why can’t a moron make Kool-aid?
Because they can’t fit 8 cups of water into that little pack!

Did you hear what happened to the moron ice hockey team?
They drowned in Spring training.

Why do morons like lightning?
They think someone is taking their picture.

Why did the moron scale the chain-link fence?
To see what was on the other side.

Why did the moron stare at frozen orange juice?
Because it said ‘concentrate.

How do you make a moron laugh on Saturday?
Tell him a joke on Wednesday.

A moron walks up to a Coke machine and puts in a coin. Out pops a coke. The moron looks amazed and runs away to get some more coins. He returns and starts feeding the machine madly and of course the machine keeps feeding out drinks. A woman walks up behind the moron and watches his antics for a few minutes before stopping and and asking if someone else could have a go. The moron spins around and shouts in her face: “Can’t you see I’m winning.”

Two morons were in a parking lot trying to unlock the door of their Mercedes with a coat hanger. They tried and tried to get the door open, but they couldn’t. The one with the coat hanger stopped for a moment to catch his breath, and the other said, anxiously, “Hurry up! It’s starting to rain and the top is down.”

Two morons were walking through the woods and they came to some tracks. The first moron said “These look like deer tracks,” and the other one said, “No, they look like moose tracks.” They argued and argued , and they were still arguing when the train hit them.

A big moron and a little moron were standing on the edge of a roof. Suddenly a gust of wind came and the big one fell off, but the little one didn’t. Why?
He was a little more on.