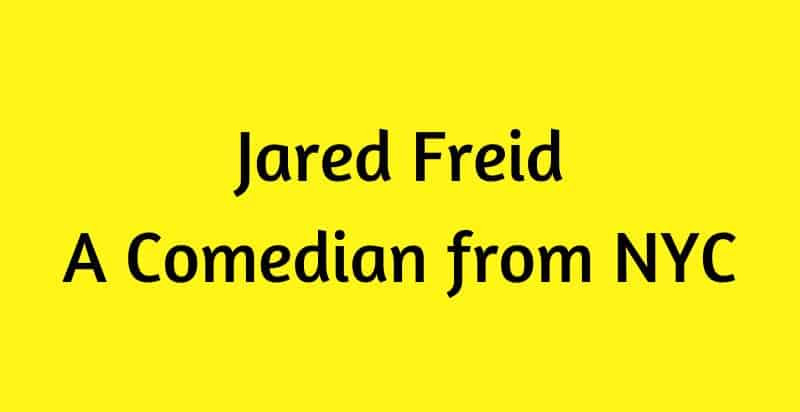 Jared Freid is a comedian who does not take inspiration from his own life for his content. Instead, he focuses on the lives of millennials and their desperate attempt to live a normal life.

Based on Freid’s content, millennials are all about dating, dieting, and worrying about their bodies. It does not sound funny here, but when Jared Freid takes a swing at it, you’re bound to crack up!

Jared Freid participates in stand-up shows all over the country and keeps NYC as his home base. He is not new to the comedy scene. Freid made his debut in The Tonight Show Starring Jimmy Fallon in 2021.

The comedian is also the host of two highly-liked podcasts. He co-hosts U Up? alongside Jordana Abraham and hosts his own show called the JTrain Podcast.

His career in comedy is rising with each year, garnering loyal fans and better stand-up opportunities. Let’s take a step back in Jared Freid’s career and see how he got here!

1. Jared Freid Had a Normal Childhood, Like Any Millennial

Jared is not obsessed with the millennial lifestyle. He has been living alongside his fellow millennials and experiencing life at full speed. The ups and downs of the economy have affected millennials the most, and Jared is one of those people.

He is from Needham, Massachusetts, where he grew up in a suburb. Life was normal outside a big city with two power wheels (something he is still proud of!)

He calls his childhood normal, but the roots of his witty nature are visible in his recollections. Jared loves talking about millennials and the way they navigate life.

Jared’s words hit home because he was among those who had happy childhoods with fewer economic problems. He said in an interview that millennials are cynical because once upon a time, they had everything, and now in their thirties, they have nothing!

2. It Was Addicting When Friends Acknowledged His Humor

Every comedian has a single point of origin where their desire to make people laugh on a greater level develops. That is when they decide to pursue a career in comedy. For Jared Freid, it was an exchange of emails with his friends.

Jared loved to write emails to his friends’ groups. Having an inclination toward being witty and amusing, he would stay true to his nature and write from his heart. When one of his friends would reply “LOL” outside the group, he would feel acknowledged and proud. This was Jared’s defining moment! He got addicted to this praise and wanted to become better at creating comical content.

3. He Didn’t Get the Support of His Friends or Family When Starting Out

When a person realizes their dream, they want to share it with the people most important in their lives. Jared also had such people in his life, but it did not go as planned. Realizing that he wanted to become a comedian was a huge deal for him.

He thought once he told people that he had a vision or a dream that would change his life, they would be happy. Jared assumed he would get all the support he wanted to boost his confidence.

Unfortunately, he realized that people do not care about someone’s dream unless it touches their lives in one way or the other! Jared shared his dream of becoming a comedian with people he cared about, but they didn’t show the same amount of enthusiasm.

When he told his parents, they had a neutral reaction. Jared may have been expecting more from them, but their “Do you” attitude was better than them judging him for his decision. At least that’s what Jared thinks! The moment made him realize that life dreams are like last night’s dreams—no one is interested in listening to them.

4. He Has Insightful Thoughts about Millennials

While many comedians would opt to use their life experiences to create entertaining content, Jared Freid thinks differently. He finds millennials and their lifestyle amusing enough to use as material for his shows.

Jared keeps his content fresh by reflecting on the lives of today’s adults. He talks about their obsession with dating apps and their desire to have desirable bodies.

He ensures that his jokes are relevant to his audience (which mostly has millennials living a similar life). His words are funny yet relatable, which is why he has a fanbase who keeps returning for his shows.

Francisco Ramos – Up-and-Coming Comedian with Appearances on HBO and Netflix!

Jared has been in the comedy business for years, yet his defining moment only came in 2021. The year introduced to the late-night show where Jimmy Fallon shared the stage with him. He was not the only comedian doing stand-up that night. Still, he shined like a star!

Keeping true to his topics of choice, Jared Freid talked about adults and their childish ways.

The Tonight Show Starring Jimmy Fallon became Jared’s personal space to create unique content. His take on returning home for Holidays was a fresh topic that made his audience laugh out loud.

Jared was on stage for 6 minutes, and it was enough to woo his audience. Some were loyal fans, while others became his followers after the performance.

6. He Is Not Having Fun All the Time

One would think that comedians have it easy. They make people laugh and truly relish each round of applause. The reality, however, is a bit different! Comedians do have a fun job where they can speak their minds and get praise from others, but they are not always happy about their lives.

Just like the rest of us, comedians sometimes are caught up in their thoughts. Jared Freid also had such moments, but he has a unique way of getting out of his own head. He would tell himself, “BOOOOO HOOOOOOO I’M MAKING PEOPLE LAUGH LIFEE ISSSS SOOOO BADD!!!!”

The thought sobers him and brings him back to reality, where he has a successful career and a fanbase who loves him. Jared also says that he wishes someone had given him this “Boooo Whoooo” Advice before he became famous!

Comedian Jared Freid makes his debut on The Tonight Show with jokes about why college students aren’t real adults and going home for the holidays.

Jared Freid may have started out as a comedian who wanted to make his friends and family laugh at harmless jokes. However, he has come far since then. The comedian has traveled across states to meet people who appreciate his work. Not only is he a famous stand-up comic now, he is also a podcaster and dating guru.

Throughout Jared’s life, one lesson he has learned is to keep moving forward because that’s where success lies. He is enjoying his work as an artist who gets to influence people’s lives and help them make better decisions, especially when it comes to dating.

All You Need to Know about Josh Potter

Who Is Zach Noe Towers?