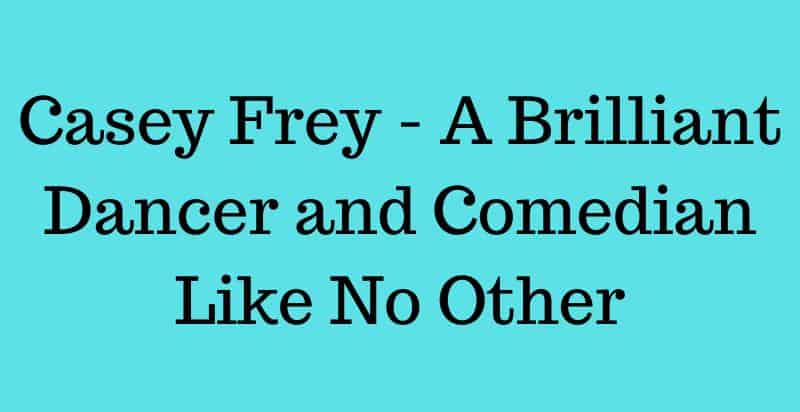 Casey Frey is a US-based actor, dancer, and internet personality, best known for his superb dance moves and comedic sketches. He has also starred in the action-drama film “Five Grand” (2016) and the comedy film “Mainstream” (2020).

Casey Frey also posts comedic videos on his social media, which are hugely popular among his fans. He is redefining what “situation comedy” is by playing all the characters in his videos himself. He parodies different types of people we encounter in our daily life by exaggerating their stereotypical personality      traits. We will look at some of the most interesting facts about this internet star.

1. Casey Frey Made His Debut on Vine

Vine was an immensely popular social media platform where users could upload 6-second videos in a loop format. Many internet celebrities rose to fame from their Vine videos, and Casey Frey is no exception. He used to upload comedic 6-second videos, which quickly began to go viral. His fan following increased dramatically as he kept posting funny videos.

In 2016, he uploaded a Vine video called “bad bois,” in which he played the character of both the “bad boi” and the girl he was trying to get. This 6-second video was one of the reasons his career launched so successfully. When Vine shut down in January 2017, Casey Frey had amassed more than 250,000 followers on his account.

2. Casey Frey Is an Amazing Dancer

The reason why Casey Frey is famous is because of his varied talents. While he has a naturally firm grasp on humor, he is also an excellent dancer. His dance videos get his fans wild on the internet. Prior to becoming a celebrity on Vine, Casey actually wanted to turn his passion for dancing into a career. He also took dance classes at School of Performing Arts and Cultural Education (SPACE). Apart from this, he was learning to dance with his uncle and some of his friends too.

Casey Frey not only posts videos of his amazing dancing capabilities on Instagram, but his comedic videos leave his fans in stitches which is what he is primarily known for. Many of Casey Frey’s videos show him in a very typical house, which makes his audience relate to him easily. His comedic style is a unique blend of awkwardness, cringe but extremely funny bits, leaving his fans laughing while trying to decide if he is serious or not.

He has introduced his fans to many characters that he plays, and their popularity has made them become a recurring theme in many of his videos. However, Casey never plays himself. He is always portraying one character or another. His characters are quite diverse and often display several traits which you have found in so many people around you. His “Can I teach you something” character was particularly appreciated by his fans for being that uncomfortable cringy person that likes to flirt with girls.

4. Casey Frey Has Done Collabs with Other Celebrities

Casey likes to make collab videos with other artists and musicians like Nick Colletti, Josh Kennedy, and Donald Glover. He currently lives in Los Angeles, making videos by himself as well as with others as his collab partners have a wonderful chemistry with each other. More celebrities can be seen in the film “Mainstream” which stars Andrew Garfield and Maya Hawke.

5. Casey Frey Has Starred in a Music Video by DVBBS

Casey Frey made a video in 2019 where he played three characters all by himself. The video featured some of his dancing moves and had gone on to become an instant hit with his fan, inspiring various remakes and parodies on Tik Tok. The video also featured the song “GOMF” by DVBBS.

The popularity of his video led DVBBS to feature Casey in their official music video of “GOMF, in which he plays the character of a “leather-jacketed man who runs the mechanical bull ride and speaks in the goofy German accent.”

Here is a compilation of some of Casey Frey’s most popular vines of all time     .

Casey Frey is a hilarious dancer and comedian who is an expert in the art of cringe comedy. He has achieved a huge fan following over the years and is continuing to grow in popularity. It is wonderful to see how he has managed to retain the same persona that made him so famous.

Sean Grant — A Renowned Comedian, Writer, Actor, Host, and Whatnot!