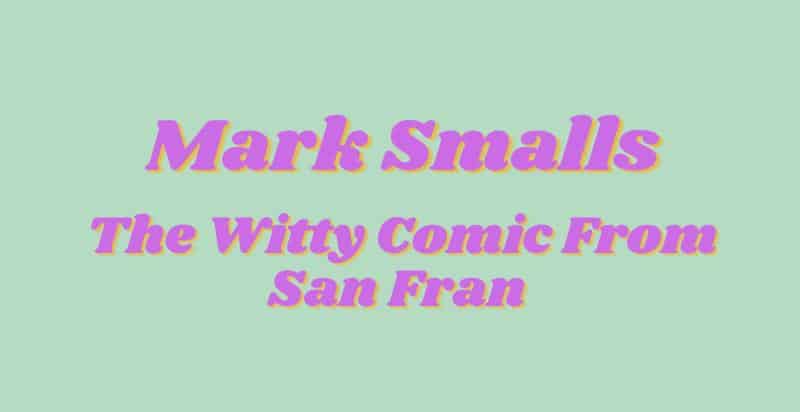 Marks Smalls is a stand-up comedian from San Francisco. Just like any other aspiring comedian, Mark made it out of the long and grinding process of the stand-up industry.

Mark was born on the East Coast and that’s where all his stories come from. He shares his East Coast outlook with the people of the West Coast through his relatable jokes that everyone finds amusing.

Read on to find out more about Mark Smalls’ not-so-small career and how he became popular.

1. He Has Been Through a Rough Patch

Like many other comedians out there who are looking for a way to get into the stand-up scene, Mark Smalls has had his fair share of disappointments. Although the process was not easy, he overcame the empty seats and failed jokes by being himself.

According to Mark, he used to feel really disappointed after his initial shows. His friends would pick him up from his gigs and he would start complaining and rant in front of his friends in the car. He would yell about being a terrible comic and his friends would crack up after listening to his complaints, saying how THAT was his real show!

Even though Mark was not trying to be funny, his one-liners did crack up his friends. That’s when he realized that that’s what he should be doing. He should just be himself and that would crack people up. So technically, he found his voice in those car rides with his friends.

2. He Has Opened for the Most Popular Comics

Mark has opened for several popular comics, including Greg Proops, Ian Bagg, Norm Macdonald, and Tony Hinchcliffe. He has also hosted a Sketchfest event where he connected his stand-up comedy with sketch comedy. Mark really enjoyed bridging the gap between the two.

3. Mark Used to Be a Skater

Mark Smalls used to be a stoned skater who would often act like an outraged kid who was going to therapy. He grew up in Walnut Creek and spent most of his time skateboarding. He wanted to be a professional skateboarder but he eventually failed. When his skateboarding peers tried their luck at stand-up, Mark decided to go along and give it a try.

Mark has a deep sense of appreciation for the legendary comedian, Dave Chapelle. He was really inspired by him. Mark was particularly awestruck by his special “Killin’ Them Softly” where Dave made jokes about the Sesame Street characters.

That’s when Mark realized that he could easily relate to those jokes as he had watched Sesame Street too. And so, he decided that he could share jokes about his experiences too.

Mark is very aware of the beef thing going on between the East Coast and West Coast’s improv scene. He admits that the crowds are super energetic and fun. There are tons of people at his improv and he always has a great time discussing this topic.

6. Mark’s Activities in the Pandemic

The comedy scene was really bad during the pandemic. However, Mark did not let this opportunity go to waste. He kept himself busy by hosting a podcast about various topics, such as golf, and by live streaming on Twitch. However, whenever he had to do comedy on Zoom conference calls, he found it really awkward and funny.

7. Mark’s Idea of Where Comedy Comes from

8. He Has a Unique Approach to Comedy

Mark has a unique approach to comedy. He targets a topic from both angles, bringing people of all beliefs, viewpoints, ages, and races together. He brings an East Coast vibe to the West Coast culture.

Watch Mark Smalls in The Parking Lot Series, the Don’t Tell Comedy’s 2nd independent YouTube series that features short sets from the best of the next generation of stand-up comedians.

Mark Smalls’s relatable personality and jokes are what attract people to his shows. He has a unique way of showing a funny angle in every tragic or bad story, which leaves people cracking up.

Born in New Jersey but working in Los Angeles, this East Coast comic brings the unique flavors of the East to the West. If you want to learn more about this hilarious comedian, check out his Instagram where he shares his day to day activities and shows. You can also find his stand-up shows on YouTube.

Lorraine Lopez — The Mexican-American Comedian You Should Check Out