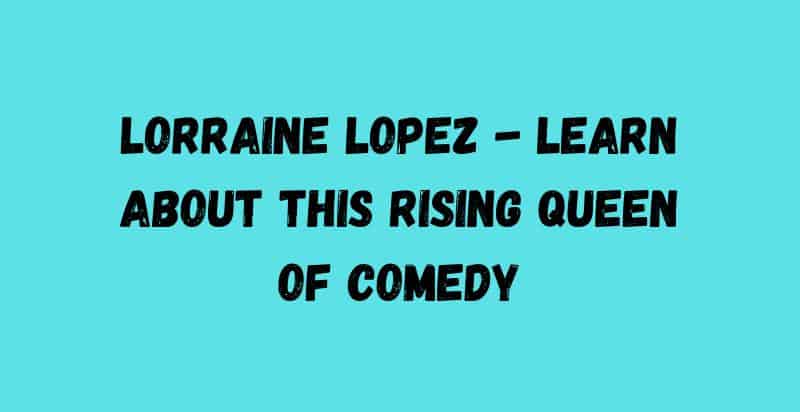 Lorraine Lopez is a Mexican-American writer, standup comedian, actress, and producer who has recently come into the spotlight due to her multi-talented and energetic personality. Join us as we take a look at 9 interesting, lesser-known facts about the artist.

1. The Up-And-Coming Comedy Star Has Done Standup at Various Clubs

The comedian started doing standup back in September 2017 and has been at it for over 4 years now. She has performed at various clubs including Improv, Comedy Store, Levity Live, and Ice House. Her audience adores her for her unconventional jokes and comedy style. Her scripts usually revolve around her dating life, her Mexican family background, and her experiences growing up.

2. Lorraine Lopez Has Been on Horribly Hollywood Singles with Adam Carr

Horribly Hollywood Singles With Adam Carr is a podcast series hosted by Adam Carr and presented by Afterbuzz TV that takes a look at the roller-coaster dating scene in Los Angeles. The first episode of the podcast premiered on November 5, 2019 and has had 25 successful episodes with the last one coming out on June 30, 2020.

On February 4, 2020, Lorraine Lopez was featured as a guest on the show where she talked about a range of topics with the host Adam Carr. The key moments of the episode were talking about ghost driving, growing up in Cleveland, overusing her cellphone, and red flags.

3. Lorraine Has Worked as a Writing and Development Assistant before Her Comedy Career

From February, 2015 to December 2015, just a little short of a year, Lorraine worked as a writing and development assistant at Castle Bright Studios. Castle Bright Studios is a renowned studio located near West Hollywood, CA – the heart of the show business industry. The studio offers various services and specializes in the production of movies, music videos, and photographs.

During her time at Castle Bright Studio, Lorraine was in charge of overseeing several activities and numerous tasks fell under her job description. Lorraine was responsible for reading, analyzing, and breaking down scripts and pitches submitted by people. Additionally, she also scheduled and coordinated meetings with clients and networks. Lastly, she was also tasked with proof reading, editing, and submitting creative materials and pitches to major film executives.

4. The Comedy Star Used to Work for Joke Productions as a Researcher and Writing Analyst

“Ghost Inside My Child,” a documentary series by Jokes Productions, earned the highest rating of any television episode in BIO channel history and was featured on LMN for numerous seasons. Some of the most recent work by Joke Productions includes “Deadly Recall” on Investigation Discovery, “Unraveled” on Discovery+, “Don’t Trust Andrew Mayne” on A&E, “Unmasking a Killer” on CNN/HLN, “Caged” on MTV, and “Scream Queens” on VH1.

During 2016, Lorraine worked for this company for less than a year and was tasked with handling several duties. She helped communicate information and creative materials between the writers and the managerial team. Furthermore, she was responsible for conducting research and providing the team with updates on trending news stories and pop culture events. She also pitched creative ideas for show topics and segments.

5. Lorraine Also Worked as a Writer for the LA Fashion Magazine

The LA Fashion (LAFM) is a multi-faceted platform which provides readers with honest and authoritative news and latest updates on a variety of subjects which include lifestyle, beauty, marketing trends, and of course, fashion. On March 15th, 2012, LAFM released its first exclusive printed magazine. It has since grown into a globally acknowledged multi-media platform with a proven track record in content development, social media management, events, public relations, and other areas.

The talented standup comedian worked at this giant firm for months from January 2016 to November 2016. She was hired as a writer who researched and wrote articles covering health and fashion trends in LA. Some of her work includes “Best LA Workouts”, and “Adolfo Sanches Autumn/Winter Collection.”

6. Lorraine Has Her Own Podcast

Lorraine kicked off her podcast Lorraine Lopez Loves… back in September 2019 and has put out 29 successful episodes to date. The most recent episode came out on August 11, 2021. The podcast generally revolves around Lorraine inviting a comic she loves on the show and interviewing them about their love life and how it influences their comedy.

As such, she has had numerous comedians and artists on her show which include Rene Sweeny, Jessica Keenan, Betsy Cox, FredWreck, and many others.

7. Lorraine Has Starred in Various Movies

Lorraine played the role of Simone in the 2012 movie Skyler. The plot revolves around a man (Ross) fighting his sexual addictions in an attempt to save his relationship with the love of his life. Ross fights his problems in a world of temptation, which puts him in some dangerous circumstances and forces him to live a double life as his alter-ego “Skyler.”

The comedy stared also played the role of Claire in the short comedy film Well Adjusted. The movie debuted in 2016 and covered the story of a man – Nathan Wellsley – as he tries to steer through the worst day of his life with disruptive voice persistently nagging him.

8. The Comedy Star Has Also Appeared in a TV Series

Lorraine stared in a TV series called Snapped: She Made Me Do It. The show premiered in 2015 and has put out two seasons to date. The plot of the show covers the story of women manipulating men into committing criminal activities. Lorraine appeared for only one episode called Shawna Forde (2015) and played the role of Gina.

9. Lorraine Has Been Invited on Several Podcasts

Lorraine Lopez is a Mexican American standup comedian/writer/actress/producer and host of “Lorraine Lopez Loves” podcast. She is an LA native who is not your typical Mexican because she speaks Spanglish and has no kids and should be a great grandmother at her age. She is the Taylor Swift of comedy, self-deprecating and uncomfortably honest. Standup was never a career option she imagined for herself until she stumbled upon an open mic after a couple cocktails and a broken heart and realized stand up was her new boyfriend.

Lorraine Lopez is a brilliant comedian who has managed to make her way into the entertainment world and put a smile on countless faces. To learn about more up-and-coming comedy stars such as Lorraine, browse our website for more content and you’ll surely be amazed!