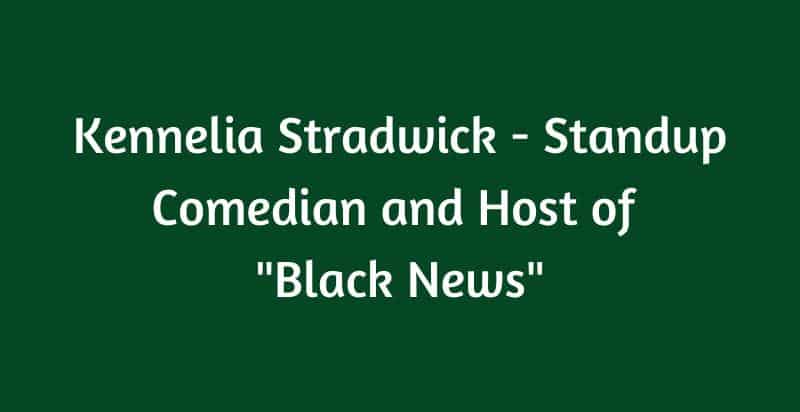 Kennelia Stradwick is a comedian, actor, and writer with a bachelor’s degree in Aviation Management. She was never interested in her major because a comedy career looked more appealing. She always had a witty and fun-loving personality, but it took her a while to realize that she could be a standup comedian.

Kennelia has professionally trained with Stella Adler Acting Studio, The People’s Improv Theatre, and HB Actor’s Workshop. As soon as she dedicated her efforts to creating a career out of her charming personality, it only took some improv sketches and standup to gain recognition.

Kennelia has been in the entertainment industry for almost 13 years and plans to remain a valuable part of it for many years to come.

While most up-and-coming comedians are aware they can make a career by making people laugh, Kennelia Stradwick had no idea that she had the talent for it.

She would make people crack up with her sharp wit and funny behavior. She knew her personality was charismatic, and people loved her antics, but she thought it was just her fun-loving nature.

Kennelia was sure that her personality would take her far, just not in the making-people-laugh-with-standup-comedy direction.

It took an award during her senior year to make Kennelia realize her love for entertainment. After she got the “Class Clown” award from her peers, it helped Kennelia see her talent for entertaining people.

2. It Took Another Four Years to Solidify Her Resolve

An award in her senior year only led Kennelia to discover her love for entertainment. She still didn’t think of her talent much and enrolled in Hampton University’s B.S. program for Aviation Management.

While the degree was her choice, it was the various on-campus organizations that held her interest. She wanted to participate in anything that would give her an opportunity to share her talent with an audience.

Sean Grant — A Renowned Comedian, Writer, Actor, Host, and Whatnot!

It didn’t take her long after completing her bachelor’s to decide that she wouldn’t pursue a career in aviation management. Kennelia packed her bags, took her degree, and hightailed to New York City.

She attended a few classes to get herself familiar with the entertainment world. Among others, she took classes at The People’s Improv Theatre (P.I.T.), where she also performed various improv sketches with other aspiring comedians and entertainers.

3. She Surprised Hollywood with Her Talent

Learning the ins and outs of the entertainment industry got Kennelia interested in Hollywood. She wanted to take a step further in her career and try out her talent in Los Angeles. This time, it didn’t take her years to finalize her decision and move to Hollywood. Since then, Kennelia has taken Los Angeles by surprise with her exceptional talent and witty humor.

She worked as a standup comedian, writer, and actor at various locations, including The “World Famous” Comedy Store, Ice House Comedy Club, Flappers Comedy Club, and Hollywood & Brea Improv. She had an amazing start to a promising career, and her talent was enough to land her some interesting and profitable gigs.

Her commitment to the craft is also commendable. Kennelia performs her best with a sharp and carefree attitude, adding her fun nature to the mix. Her talent is apparent in the various performances and writings she has done so far.

4. Her Portfolio Has Some Big Names

Kennelia proved herself a valuable asset to the industry during her early days. Now, it does not take much effort on the producers’ part to ask if she’s available for a performance, show, or podcast. Kennelia’s portfolio holds some familiar names that show us how talented this young woman is!

She is a former host of “The No Flex Zone,” a radio show by DASH Radio. She was also an on-air host for AfterBuzz and the morning Traffic Anchor on Sacramento’s “Morning Blend.”

Some of her greatest achievements are the “Best of Fest” for the Big Pine Comedy Festival, the Co-creation and Hosting of “Happy Hour; A Shot of Conversation,” and an appearance in the “Superior Donuts” show.

Kennelia has also been a part of various web series, print campaigns, and commercials. She was also a featured comedian on “Laughs.” And while doing all of that, she was a creator and host for “Black News,” a podcast about the lives of black people, and a researcher and writer for “Nosy Neighbors,” a Spotify-exclusive podcast.

5. She Wanted to Create Something Like “High on the Hog”

“High on the Hog: How African American Cuisine Transformed America” is a Netflix documentary highlighting the effects of African American food over the course of decades. Written by Chef Stephen Satterfield, the show captures the essence of this cuisine, which is something Kennelia Stradwick would like to create.

The show made her realize that she wanted to create something of a similar kind. A program that showcases the culture of African Americans can inspire and touch many souls. Kennelia thought that she was not doing something that powerful back in June 2021. The comedian did not realize that a similar opportunity was right around the corner for her.

Chinedu Unaka – Get to Know This Veteran Comedian and Producer

No later than a few months, Kennelia got “Black News,” an Apple Podcast about the local stories and recent news of Black people. The program has unique episodes released weekly. More importantly, she is the creator of the show!

Kennelia is an entertainer interested in standup comedy, but some of her best performances are not humorous. She has hosted various programs and shows where Kennelia has proven to be a valuable host. Some of her best hosting pieces include the red carpet of Scandal’s 100th episode and Sacramento’s Morning Blend by abc10.

Kennelia’s versatility confirms her talent and dedication to the entertainment industry. She has been participating in various shows and podcasts for over a decade, yet her excitement and passion for each project never ceases to amaze.

Kennelia Stradwick discusses the early days of Covid, being old and dating in LA, and having unrealistic standards.

Kennelia Stradwick is an exceptional entertainer with a flair for making people laugh. She takes her witty humor and charming personality everywhere she goes, making her an essential part of the entertainment industry.

With an outstanding portfolio and a hunger to create creative content, we believe Kennelia will land some impressive entertainment gigs in no time.

Chris Grace – The Comedy Champ You Need to Know

Feraz Ozel – A Comedian Who Turned Down Law School