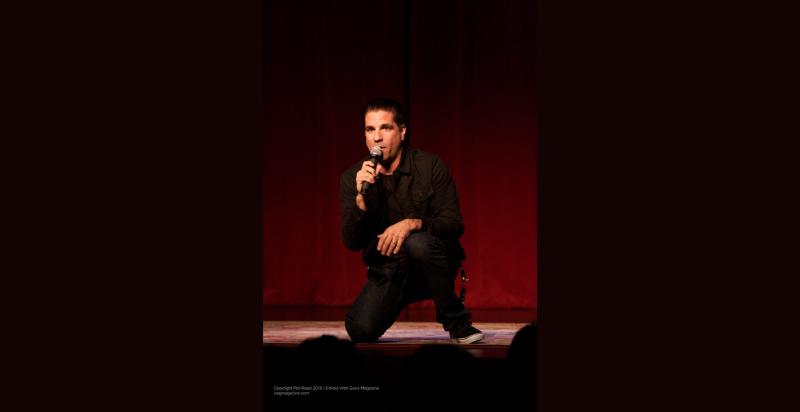 Joe Sib is a former rock band member, standup comedian, and record label co-founder. He started his entertainment career as the frontman for Wax, a rock band inspired by Joe’s love for punk rock.

Joe does not entertain his rock fans anymore but continues to show his appreciation and passion for music through SideOneDummy Records, a record label he founded with Bill Armstrong.

Joe’s journey into standup comedy was another memorable moment in his career. He did a one-man show California Calling and performed it across various comedy clubs and festivals. It led to the release of his debut album, Nowhere Near the Top, in 2017.

Let’s take a closer look at Joe Sib’s transition from a punk rock artist to a comedian on stage!

1. California Calling Was His Way into Comedy Clubs

Joe Sib used to be the frontman for a rock band. Despite being an entertainer most of his life, he never thought standup comedy would be something he would do. Joe used to drive past comedy clubs like The Laugh Factory, The Improv, and The Comedy Store but never considered going in.

He was an aspiring musician looking for a way to start his own band, so the comedy clubs were never on his radar until California Calling.

2. California Calling Was Storytelling, Not Standup

Joe thought his first professional comedy performance on stage was standup, but when he met a guy at Largo named Flanagan, he told Joe that California Calling was storytelling and not standup. Joe thought he was doing standup, but Flanagan’s statement made him feel otherwise.

He returned the next week, and Flanagan put him on stage without music cues and photos. Joe loved standing on stage without any cues and doing his material. At that point, he realized that standup was his thing!

3. Joe Sib Got Addicted to Getting Laughs

He was a performer before standup comedy and loved the feeling of being onstage. Joe wanted to feel that energy and environment again, leading to him getting addicted to standup. California Calling was storytelling which was going great for Joe Sib, but he did not want to limit his potential and took standup as a challenge.

It took him more than a decade to improve his standup material, but he never thought of quitting. He still chases the laughs and does not want to stop!

4. People Always Thought He Could Be a Standup Comedian

Joe moved to LA when he was 23 years old with a dream to start a rock band. He used to hang around many people who thought he was in LA to become a standup comedian.

He told them he was into music, but when his girlfriend (now wife) asked him to go to The Comedy Store with her, he did a three-minute performance and liked it. Still, music was his priority.

From Comedian to Actor to Producer: The Many Faces of Shawn Wayans

Joe Sib has compared his love for standup comedy with substance addiction. He does not say that his love for comedy is the same as a person addicted to drugs, but it’s not that different either.

He loves it when people laugh at his material and gets upset when they don’t. When he fails to get a laugh from his audience, he takes it as a challenge and returns the next night to fix it.

George Carlin’s Class Clown was the first comedy record Joe Sib ever heard. As a rock band member and the co-founder of a record label, he had seen many record covers, but Class Clown‘s attractive cover made him check out the record.

He was blown away by George Carlin’s work. As a result, he began to explore more legendary comedians like Richard Pryor and Eddie Murphy. He compares these comedians with music legends like Mick Jagger and Joe Strummer.

7. The Influencers in His Life

Before Joe knew about George Carlin’s Class Clown, he had an inspiration in his life who got him interested in comedy—his dad. Joe’s father had a unique sense of humor and a love for SNL in the ’70s. He would encourage Joe to stay up late on Saturdays and watch Saturday Night Live with him. Thanks to his dad, Joe got to see great talents like John Belushi and Dan Aykroyd.

8. He Comes Up with Jokes While Jogging

According to Joe, the endorphins make him more creative when he’s jogging, which is why he comes up with good ideas. He has to stop whenever he thinks of a new idea and write it down before he forgets. Sometimes the ideas seem too big, so he takes them in front of the audience and tests which ones work.

Every idea that comes to him while jogging does not make it to the final work, but he likes the product after removing the unnecessary parts—what’s left is the authentic standup material.

9. He Accepts Standup with All Its Quirks

Joe understands the sacrifices it takes to become a successful standup comedian. He started with California Calling, where he’d perform on various stages, and his wife would accompany him everywhere. She planned to continue doing that for all his standup shows too, but Flanagan from Largo told her she wouldn’t be able to because of the repetitiveness of the artform.

Standup is unlike music—it does not get better every time you hear it. Joe figured this was why people kept telling him not to become a comedian, but he had already accepted standup for what it was and didn’t want to give up!

10. Always Being Funny Is the Constant

The internet boom and the role of social media in connecting up-and-coming comedians with their audience. Joe thinks it’s similar to the DIY attitude in punk rock.

Joe believes comedians do not need to struggle for a TV spot these days. They can post their videos online, share the details of their shows on social media, and perform later in front of a crowd.

Despite the convenience of the internet, he said that being funny is the most crucial factor in standup. Improving the craft is the only way to stay relevant and famous in this side of the entertainment world.

Joe Sib gets every text message from his daughter’s phone, just like the NSA.

Joe Sib started his standup journey with California Calling, a storytelling performance he shared with his audience at comedy clubs and festivals.

He discovered his love for standup later in life because he was a rock band member who gained many fans through his music. Once he started performing on stage as a comedian, people loved watching this new side to Joe Sib.

James Heaney – The Master of Improv

What to Wear to a Comedy Club? The Dos and Don’ts of Comedy Club Outfits