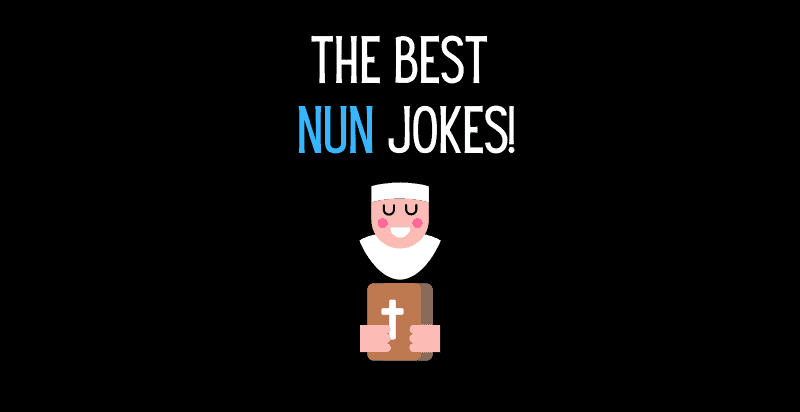 Nuns and jokes – who knew these two things would go so well together?

We’ve compiled a list of our favorite nun jokes to share with you. Some may be old, but we hope you find them at least mildly amusing.

The Most Hilarious Nun Jokes

How do you get rid of a nun’s hiccups???
Tell her she’s pregnant!!!

What is the definition of innocence?
A nun working in a condom factory thinking she’s making sleeping bags for mice.

What do you call a nun who walks in her sleep?
A roaming catholic.

What do you call a nun with a sex change operation?
A tran-sister.

What’s black and white and red and has trouble getting through a revolving door?
A nun with a spear through her head!

Two nuns are cycling down a cobbled street.
The first one says “I’ve never come this way before.”
The second one replies “Must be the cobbles”

A cop pulls over a car load of nuns. The cop says, “Sister, this is a 55 MPH highway. Why are you going so slow?”

The Sister says, “Oh! Silly me! Thanks for letting me know. I’ll be more careful.”
At this point, the cop looks in the backseat where the other nuns are shaking and trembling.

The cop asks, “Excuse me, Sister, what’s wrong with your friends back there? They are shaking something terrible.”

The head nun tells the two new nuns that they have to paint their room without getting any paint on their clothes. So the one nun says to the other, “Hey, let’s take all our clothes off, fold them up, and lock the door.”

So they do this, and begin painting their room. Soon they hear a knock at the door. They ask, “Who is it?”
“Blind man!”

The nuns look at each other, then one nun says, “He’s blind, he can’t see. What could it hurt.” They let him in.

The blind man walks in and says, “Hey, nice tits. Where do you want me to hang the blinds?”

Pat is not feeling very well and he decides to go to a doctor.
While he is waiting in the doctor’s reception room, a nun comes out of the doctor’s office. She looks very ashen, drawn and haggard.

Pat goes into the doctor’s office and says to the doctor: “I just saw a nun leaving who looked absolutely terrible. I have never seen a woman look worse.”

The doctor says: “I just told her that she is pregnant.”

Pat exclaims: “Oh my, is she?”
The doctor responds: “No, but it sure cured her hiccups.”

The new nun goes to her first confession. She tells the priest that she has a terrible secret. The priest then tells her that her secret is safe in the sanctity of the confessional.

She says, “Father, I never wear panties under my habit.”

The priest chuckles and says, “That’s not so serious, Sister Bernadette. Say five Hail Marys, five Our Fathers, and do five cartwheels on your way to the altar.”

One night a blond nun was praying in her room when God appeared before her.
“My daughter, you have pleased me greatly. Your heart is full of love for your fellow creatures and your actions and prayers are always for the benefit of others. I have come to you, not only to thank and commend you, but to grant you anything you wish,” said God.

“Dear Heavenly Father, I am perfectly happy. I am a bride of Christ. I am doing what I love. I lack for nothing material since the Church supports me. I am content in all ways,” said the nun.

“There must be something you would have of me,” said God.
“Well, there is one thing,” she said.
“Just name it,” said God.
“It’s those blonde jokes. They are so demeaning to blondes everywhere, not just to me. I would like for blonde jokes to stop.”

The Most Hilarious Goat Jokes

“Consider it done,” said God. “Blonde jokes shall be stricken from the minds of humans everywhere. But surely there is something that I could do just for you.”
“There is one thing. But it’s really small, and not worth your time,” said the nun.
“Name it. Please,” said God.
“It’s the M&M’s,” said the blonde nun. “They’re so hard to peel.”

A man was brought to Mercy Hospital, and went in for coronary surgery. The operation went well, and as the groggy man regained consciousness, he was reassured by a Sister of Mercy waiting by his bed.

“Mr. Smith, you’re going to be just fine,” the nun said while patting his hand. “We do have to know, however, how you intend to pay for your stay here. Are you covered by insurance?”

“Nuns are not spinsters, Mr. Smith,” the nun replied. “They are married to God.” “Okay,” the man said with a smile, “then bill my brother-in-law.”

Two Scottish nuns have just arrived in USA by boat and one says to the other, “I hear that the people of this country actually eat dogs.” “Odd,” her companion replies, “but if we shall live in America, we might as well do as the Americans do.”

Nodding emphatically, the mother superior points to a hot dog vendor and they both walk towards the cart.

“Two dogs, please,” says one. The vendor is only too pleased to oblige, wraps both hot dogs in foil and hands them over the counter. Excited, the nuns hurry to a bench and begin to unwrap their dogs.

The mother superior is first to open hers.
She begins to blush and, then, staring at it for a moment, leans to the other nun and whispers cautiously, “What part did you get?”

Two nuns are ordered to paint a room in the convent, and the last instruction of the Mother Superior is that they must not get even a drop of paint on their new habits.

After conferring about this for a while, the two nuns decide to lock the door of the room, strip off their habits, and paint in the nude. In the middle of the project, there comes a knock at the door.

Three Nuns On the Way to Heaven

Three nuns who had recently died where on their way to heaven. At the pearly gates they were met by St. Peter. Around the gates there was a collection of lights and bells.

St. Peter stopped them and told them that they would each have to answer a question before they could enter through the pearly gates.

St. Paul: “What were the names of the two people in the garden of Eden?”
1st nun : “Adam and Eve”

The lights flashed the bells rang and in she went through the pearly gates.
St. Paul: “What did Adam eat from the forbidden tree ?”
2nd nun : “An apple”

The lights flashed the bells rang and in she went through the pearly gates.
And finally it came the turn of the last nun.

St. Paul : “What was the first thing Eve said to Adam ?”
After a few minutes thinking she says “Gosh, that’s a hard one!”
The lights flashed the bells rang and in she went through the pearly gates!