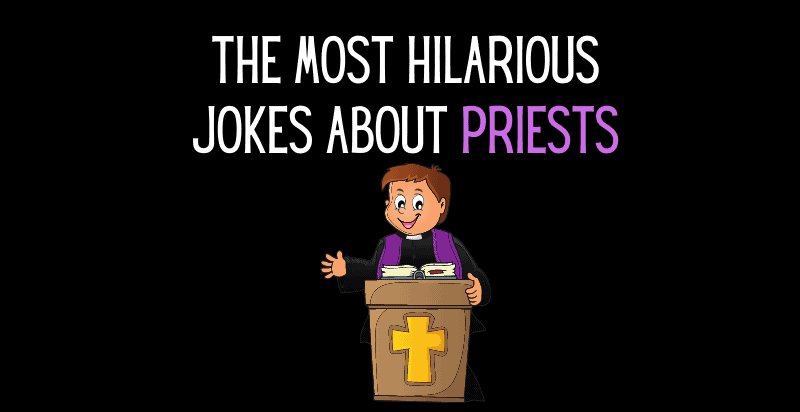 Priest jokes are often considered to be dirty or offensive for their off-color content. They are usually told in a teasing manner by children about priests, nuns, and other religious figures. Some adults tell priest jokes in an effort to be funny while others do it to make fun of religion.

The punchline of these jokes is usually the misbehaving priest who is either trying to get away with something or seeming like they are not working hard enough. Priest jokes are a staple of comedy routines. They’re often used as a light-hearted opener to poke fun at the Catholic Church and some of its more ridiculous practices.

The Funniest Jokes about Priests

A couple had two little boys, ages 8 and 10, who were excessively mischievous. They were always getting into trouble and their parents knew that, if any mischief occurred in their town, their sons were probably involved.

They boys’ mother heard that a clergyman in town had been successful in disciplining children, so she asked if he would speak with her boys. The clergyman agreed, but asked to see them individually. So the mother sent her 8-year-old first, in the morning, with the older boy to see the clergyman in the afternoon.

The clergyman, a huge man with a booming voice, sat the younger boy down and asked him sternly, “Where is God?”.

They boy’s mouth dropped open, but he made no response, sitting there with his mouth hanging open, wide-eyed. So the clergyman repeated the question in an even sterner tone, “Where is God!!?” Again the boy made no attempt to answer. So the clergyman raised his voice even more and shook his finger in the boy’s face and bellowed,

The boy screamed and bolted from the room, ran directly home and dove into his closet, slamming the door behind him. When his older brother found him in the closet, he asked, “What happened?”

The younger brother, gasping for breath, replied, “We are in BIG trouble this time, dude. God is missing – and they think WE did it!”

The Best Your Momma Jokes

The new minister’s wife had a baby.

The minister appealed to the congregation for a salary increase to cover the addition to the family.

The congregation agreed that it was only fair, and approved it.

When the next child arrived, the minister appealed again and the congregation approved again.

Several years and five children later, the congregation was a bit upset over the increasing expense. This turned into a rather loud meeting one night with the minister.

Last night I strayed and had an affair with two 18 year old girls. We partied and made love all night long.”

The priest said, “My son, when was the last time you were at confession?”

The old man said, “I have never been to confession, I’m Jewish.”

The priest said, “Then why are you here telling me this?”
The old man said, “Father, I’m telling everyone!”

A minister told his congregation, “Next week I plan to preach about the sin of lying. To help you understand my sermon, I want you all to read Mark 17.”
The following Sunday, as he prepared to deliver his sermon, the minister asked for a show of hands. He wanted to know how many had read Mark 17. Every hand went up.

The minister smiled and said, “Mark has only 16 chapters. I will now proceed with my sermon on the sin of lying.”

After the church service a little boy told the pastor, “When I grow up, I’m going to give you some money.

“Well, thank you,” the pastor replied. “But why?”
“Because,” the boy responded, “my daddy says you’re one of the poorest preachers we’ve ever had.”

Two priests were going to Hawaii on vacation and decided that they would make this a real vacation by not wearing anything that would identify them as clergy.

As soon as the plane landed, they headed for a store and bought some really outrageous shorts, shirts, sandals, sunglasses, and etc.

The next morning they went to the beach, dressed in their “tourist” garb and were sitting on beach chairs, enjoying a drink, the sunshine and the scenery when a “drop dead gorgeous” blonde in a tiny bikini came walking straight towards them.

They were both stunned. How in the world did she recognize them as priests?
The next day they went back to the store, bought even more outrageous outfits-these were so loud, you could hear them before you even saw them-and again settled on the beach in their chairs to enjoy the sunshine, etc.

After a while, the same gorgeous blonde, wearing a string bikini this time, came walking toward them again. (They were glad they had sunglasses, because their eyes were about to pop out of their heads.)

Again, she approached them and greeted them individually: “Good morning, Father,”

“Good morning Father,” and started to walk away.
One of the priests couldn’t stand it and said. “Just a minute, young lady. Yes, we are priests, and proud of it, but I have to know, how in the world did YOU know?”

“Oh, Father, don’t you recognize me? I’m Sister Angela!”
Help others and learn how to run…

A priest is walking down the street one day when he notices a very small boy trying to press a doorbell on a house across the street.

However, the boy is very small and the doorbell is too high for him to reach.
After watching the boys efforts for some time, the priest moves closer to the boy’s position.

He steps smartly across the street, walks up behind the little fellow and, placing his hand kindly on the child’s shoulder leans over and gives the doorbell a solid ring.

Crouching down to the child’s level, the priest smiles benevolently and asks, “And now what, my little man?”

To which the boy replies, “Now we run!”

A minister dies and is waiting in line at the Pearly Gates.
Ahead of him is a guy who’s dressed in sunglasses, a loud shirt, leather jacket, and jeans.

Saint Peter addresses this guy, “Who are you, so that I may know whether or not to admit you to the Kingdom of Heaven?”

He smiles and says to the taxi driver, “Take this silken robe and golden staff and enter the Kingdom of Heaven.”

The taxi driver goes into Heaven with his robe and staff, and it’s the minister’s turn.
He stands erect and booms out, “I am Joseph Snow, pastor of Calvary for the last forty-three years.”

He says to the minister, “Take this cotton robe and wooden staff and enter the Kingdom of Heaven.”

“Just a minute,” says the minister. “That man was a taxi driver, and he gets a silken robe and golden staff. How can this be?”
“Up here, we work by results,” says Saint Peter. “While you preached, people slept; while he drove, people prayed.”

The Priest and the Preschooler

A priest was walking along the school corridor near the preschool wing when a group a little ones were trotting by on the way to the cafeteria.

One little lad of about three or four stopped and looked at him in his clerical clothes and asked, “Why do you dress funny?” He told him that he was a priest and that this is the uniform priests wear.

Then he pointed to the priest’s little plastic collar insert and asked, “Does it hurt? Do you have a Boo-boo?”

The priest was perplexed till he realized that to him the collar insert looked like a band aid. So the priest took it out to show him. On the back of the collar are raised letters giving the name of the manufacturer.

The little guy felt the letters, and the priest asked, “Do you know what those words say?”

“Yes I do,” said the lad who was not old enough to read. Peering intently at the letters he said, “It says, ‘Kills ticks and fleas up to six months!”