The Best and Worst Police and Cop Jokes 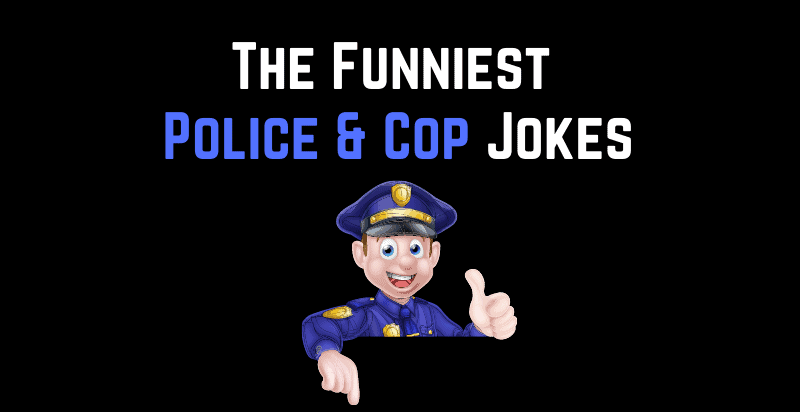 Cop jokes can be used as a way for people to blow off steam toward the police. These jokes are all clean and good fun. Enjoy!

The Most Hilarious Jokes about Police and Cops

A male driver is pulled over by a cop and the following conversation takes place:

Wife: Oh Harry, you’ve known about that tail light for weeks.
(Man gives his wife a dirty look.)
Cop: I’m also going to give you a citation for not wearing your seat belt.

Man: Oh, I just took it off when you were walking up to the car.
Wife: Oh Harry, you never wear your seat belt.

Man: Shut your mouth, woman!
Cop: Ma’am, does your husband always talk to you this way?
Wife: No, only when he’s drunk.

Driving Under the Influence

One night a police officer was staking out a particularly rowdy bar for possible DUI violations. At closing time, he saw a fellow stumble out of the bar, trip on the curb and try his keys on five different cars before he found his.

The man sat in the front seat fumbling around with his keys for several minutes. Meanwhile, all the other patrons left the bar and drove off.

Finally he started his engine and began to pull away. The police officer was waiting for him. As soon as he pulled onto the street, the officer stopped him, read him his rights and administered the breathalyzer test to determine his blood-alcohol content.

The results showed a reading of 0.0.

The puzzled officer demanded to know how that could be. The driver replied, “Tonight I’m the designated decoy.”

Two girlfriends were speeding down the highway at well over a 100 miles per hour.

“Hey,” asked the brunette at the wheel, “see any cops following us?”

The blonde turned around for a long look. “Yea. I see some following us now!”

“Oh, NOOOO!” yelled the brunette. “Are his flashers on?”

Related: The Funniest Jokes about Attorneys and Lawyers

The Priest and the Rabbi

A Rabbi and a Priest are driving one day and, by a freak accident, have a head-on collision with tremendous force. Both cars are totally demolished, but amazingly, neither of the clerics has a scratch on him.

After they crawl out of their cars, the rabbi sees the priest’s collar and says, “So you’re a priest. I’m a rabbi.

Just look at our cars.
There is nothing left, yet we are here, unhurt.

This must be a sign from God!”
Pointing to the sky, he continues, “God must have meant that we should meet and share our lives in peace and friendship for the rest of our days on earth.”

The priest replies, “I agree with you completely.
This must surely be a sign from God!”
The rabbi is looking at his car and exclaims, “And look at this!
Here’s another miracle!

My car is completely demolished, but this bottle of Mogen David wine did not break.
Surely, God wants us to drink this wine and to celebrate our good fortune.”

The rabbi takes the bottle and immediately puts the cap on, then hands it back to the priest.
The priest, baffled, asks, “Aren’t you having any, Rabbi?”
The rabbi replies, “Nah… I think I’ll wait for the police.”

A police officer attempts to stop a car for speeding and the guy gradually increases his speed until he’s topping 100 mph. He eventually realizes he can’t escape and finally pulls over.

The cop approaches the car and says, “It’s been a long day and my tour is almost over, so if you can give me a good excuse for your behavior, I’ll let you go.”

The guy thinks for a few seconds and then says, “My wife ran away with a cop about a week ago. I thought you might be that officer trying to give her back!”

A police officer stopped a motorist who was speeding down Main Street.
“But officer,” the man began, “I can explain.”

“Just be quiet,” snapped the officer. “I’m going to let you cool your heels in jail until the chief gets back.”

“But, officer, I just wanted to say,” “And I said to keep quiet! You’re going to jail!”

A few hours later the officer looked in on his prisoner and said, “Lucky for you that the chief’s at his daughter’s wedding… He’ll be in a good mood when he gets back.”

“Don’t count on it,” answered the fellow in the cell. “I’m the groom.”

Things Not To Say to Police Officers:

1. Are you Andy or Barney?
2. Do you know why you pulled me over? Okay, just so one of us does.
3. I thought you had to be in good physical condition to be a police officer.
4. Sorry, Officer, I didn’t realize my radar detector wasn’t plugged in.
5. I pay your salary!
6. Aren’t you the guy from the Village People?
7. Hey, you must’ve been doing’ about 125 mph to keep up with me. Good job!
8. You’re not gonna check the trunk, are you?
9. Gee, Officer! That’s terrific. The last officer only gave me a warning, too!
10. I was trying to keep up with traffic. I know there are no other cars around. That’s how far ahead of me they are.
11. When the Officer says “Gee Son….Your eyes look red, have you been drinking?” You probably shouldn’t respond with, “Gee Officer your eyes look glazed, have you been eating doughnuts?”