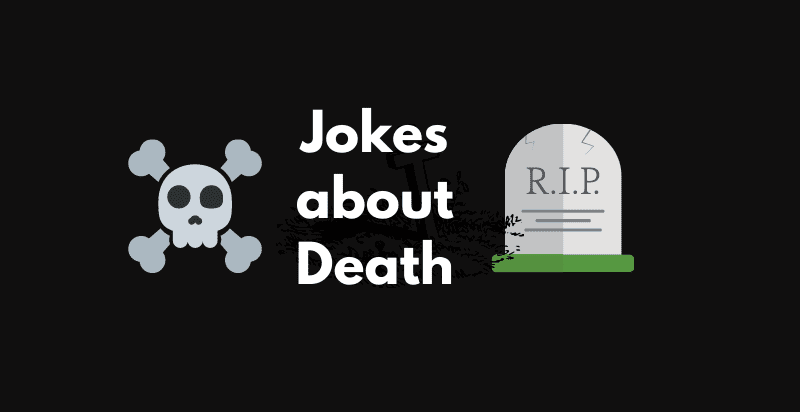 There’s an old saying that the only two things guaranteed in this world are death and taxes. Today, we have some jokes about death. These are so good they can even make dead people roll over in their graves!

The Funniest Jokes about Death

The Best One Liner Puns and Jokes about Death

A will is a dead giveaway.

A will is a dead giveaway.

He used to ring the church bell. Now he’s a dead ringer.

I suspected he was sick, and it was a dead giveaway when he signed his will.

A professional skier will never die. They just go downhill.

I came across an advertisement for burial plots, and it occurred to me that it was the last thing I needed.

Twin monks who ring the church bells have died. They are now dead ringers.

The cheap casket was a dead giveaway! I won it in a raffle.

I thought the viewing was last night, but when I got there, the place was dead.

At the boss’ funeral, a disgruntled employee kneeled next to the coffin and whispered, “Who’s thinking outside the box now, Gary?”

Being cremated is my last hope for a smokin’ hot body.

Give a man a plane ticket, and he flies for the day. Push him out of the plane at 3,000 feet, and he’ll fly for the rest of his life.A cartoonist was found dead in his home. The details are sketchy.

Never get on a funeral director’s bad side. Remember, cremation destroys 100% of DNA.

Thanks to our funeral director for being the last person to let us down.

Being a funeral director is a dying profession.

A funeral director friend of mine bought a brand new Cadillac hearse. People are dying to take a ride in it.

She did this for her own dead-ification.

What kind of flowers were planted in the Swiss cemetery? Dead-elweiss.

What do you call a coffee shop that used to be funeral directors? A decoffinated cafe!

Today I passed my exams to be a funeral director! Shame it’s a dying trade.

It’s partially dead and partially undead. I loved the die-chotomy.

“I know I’m getting old. The other day I walked past a cemetery, and two guys attacked me with shovels.” – Rodney Dangerfield

“Always go to other people’s funerals. Otherwise, they won’t come to yours.”
– Yogi Berra

“I’d like to die on Mars. Just not on impact.”
-Elon Musk

“Either this man is dead, or my watch has stopped.”
-Groucho Marx

A murderer, sitting in the electric chair, was about to be executed.
“Have you any last requests? asked the chaplain.
“Yes,” replied the murderer. “Will you hold my hand?”

Have a Life After Death

“Do you believe in life after death?” the boss asked one of his employees.
“Yes, Sir.” the new recruit replied.
“Well, then, that makes everything just fine,” the boss went on. “After you left early yesterday to go to your grandmother’s funeral, she stopped in to see you

The man who was about to die said to the Sheriff,
“Say, do I really have to die swinging from a tree?”

“Course not,” replied the Sheriff. “We just put the rope round your neck and kick the horse away. After that it’s up to you.”

A man was calling on his best friend to pay his condolence the day after his friend’s wife death.

He knocked on the door, but he got no answer. So he decided to go in and see if everything was all right. Upon entering the house, the man discovers his friend in the living room having sex with the maid.

“Jack”, said the man, “Your wife just died yesterday!!” His friend looked up and said, “In this grief, do you think I know what I’m doing?”

A man was driving along the highway, and saw the Easter rabbit hopping across the middle of the road. He swerved to avoid hitting the rabbit, but unfortunately the Easter rabbit jumped in front of the car and was hit.

The basket of eggs went flying all over the place, candy too. The driver, being a sensitive man as well as an animal lover, pulled over to the side of the road, and got out to see what had become of the rabbit carrying the basket.

Much to his dismay, the colorful rabbit was dead. The driver felt so awful, he began to cry.

A woman driving down the highway saw the man crying on the side of the road and pulled over. She stepped out of her car and asked the man what was wrong. “I feel terrible!” he explained, “I accidentally hit the Easter rabbit and killed it. Kids will be so disappointed. What should I do?”

The woman told the man not to worry. She knew what to do. She went to her car trunk, and pulled out a spray can.

She walked over to the dead, limp rabbit, and sprayed the contents of the can onto the furry animal.Miraculously the Easter rabbit came to life, jumped up, picked up the spilled eggs and candy, waved its paw at the two humans and hopped down the road.

The man was astonished. He couldn’t figure out what substance could be in the woman’s spray can!!

He ran over to the woman and asked, “What is in your spray can? What did you spray on the Easter rabbit?” The woman turned the can around so that the man could read the label. It said:

Blonde, Redhead and a Brunette in a Firing Squad

Three women are about to be executed for crimes. One’s a brunette, one’s a redhead, and one’s a blonde.

Suddenly the brunette yells, “Earthquake!!” Everyone is startled and looks around. She manages to escape.

The redhead then screams, “Tornado!!” Yet again, everyone is startled and looks around. She too escapes execution.

When Beethoven passed away, he was buried in a churchyard.

A couple of days later, the town drunk was walking through the cemetery and heard some strange noise coming from the area where Beethoven was buried. Terrified, the drunk ran and got the priest to come and listen to it.

The priest bent close to the grave and heard some faint, unrecognizable music coming from the grave.

Frightened, the priest ran and got the town magistrate.
When the magistrate arrived, he bent his ear to the grave, listened for a moment, and said, “Ah, yes, that’s Beethoven’s Ninth Symphony, being played backwards.”

He listened a while longer, and said, “There’s the Eighth Symphony, and it’s backwards, too. Most puzzling.” So the magistrate kept listening, “There’s the Seventh… the Sixth… the Fifth…”

Suddenly the realization of what was happening dawned on the magistrate.

He stood up and announced to the crowd that had gathered in the cemetery, “My fellow citizens, there’s nothing to worry about. It’s just Beethoven decomposing.”