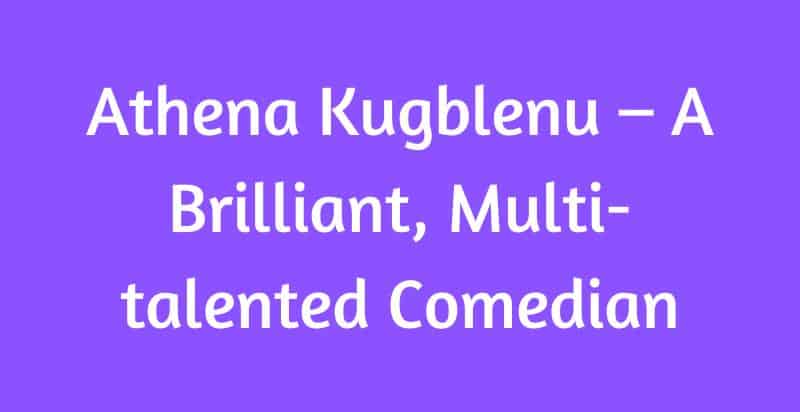 Athena Kugblenu is one of those fiery souls who can make people laugh and be in awe even when they disagree with her. She is known for her high intellect, razor-sharp wit and masterfully creating and balancing tension in her story telling comedic style.

Athena has many talents that allow her to expand her horizons beyond the world of comedy. She is also a writer for various programs and comedy sketches along with several notable newspapers and magazines.

Her talent can never be denied and many are in awe of her personality. We will now look at what makes Athena Kugblenu so special.

1. Athena Kugblenu Made Her Comedy Debut in 2017

Athena first performed at a comedy show in Johannesburg International Comedy Festival in 2017. Following that she made her debut in her first hour-long show “KMT” at the Edinburgh Fringe Festival. She then went on a tour to do her second show “Follow the Leader”.

Both of these shows received universal praise from the audience so much so that it was surprising for someone who is a newcomer in the comedy world.

She then gained widespread fame and went on to become a performer, writer and panelist for many shows like Breaking the News, Mock the Week, Loose Ends, Horrible Histories and the Russel Howard Hour.

2. Athena Kugblenu Is No Stranger to TV Appearances

It is hard to doubt Athena’s talent. During the early stages of her career, she quickly got offers to appear in various TV shows.

She has been featured in Sam Delaney’s News Thing, The Big Night In, The Dog Ate My Homework, Who Said That and Mock the Week, Girl on Girl and several others. She has also performed at the Stampdown Comedy Night.

Kennelia Stradwick – A Standup Comedian and Host of “Black News”

3. Athena Kugblenu Has Various Awards and Nominations Under Her Belt

Athena Kugblenu is a member of the BBC Comedy Room. In 2020, she was awarded the BBC Felix Dexter Bursary for “BAME” up-and-coming comedy writers. Moreover, she is also a nominee of the 99 Club Female Comedians’ Bursary along with being a former BBC New Comedy Award Finalist.

4. Athena Kugblenu Is a Well-Known Writer for Various Platforms

Currently, Athena is engaged in writing for Horrible Histories, The Lenny Henry Show, Dead Ringers, the Russel Howard Hour, Newsjack, News Quiz, and The Now Show. She is also working as a lead writer for the multicultural Radio 4 sketch-show called Sketchtopia.

In addition to all this, she is a regular contributor to many Children’s BBC shows like Jojo and Gran Gran, Crackerjacker and Swashbuckle, and The Amelia GethingComplex. Her successful experiences with all of these and more has led to work on developing her very own scripted projects.

Athena is also one of the founding members of the London-based improv group “Do The Right Thing”. This group has various shows and workshops held every month. She also performs at various improv events all over the country.

5. Athena Kugblenu Is a Blogger and Commentator Along with Being a Comedian

Few comedians exist in the world who can claim mastery over their penmanship and Athena Kugblenu is one of them. While she is a notable comedy writer, she has also been a valued commentator.

She regularly writes for many different famous newspapers and articles like The Sunday Times, The Guardian Stylist Magazine, and Time Out along with many others. Her unique insight in some of the world issues and societal problems has led her to develop her own fan following.

Moreover, she has been actively blogging for more than ten years. Her blog is called Stupidity is Painless and it has garnered a huge following.

On her blog, she often likes to challenge the mainstream ideas that are prevalent in society. She uses her comedic material to express her views and provide a fresh perspective on topics that she disagrees with.

To mix humor, wit, intellect and philosophy all together is truly an art. Many comedians attempt it, but few manage to succeed.

However, Athena Kugblenu achieves all this at her fingertips. She often sheds light on socio-economic problems of the world and her life experiences based on immigrant background.

As a stand-up comedian, she likes to talk about racism, politics and other uncomfortable subjects like parents wanting a grandchild. However, she tackles them with so much tact and delicacy that people often laugh out loud while having something to think about.

Athena herself has said that she likes to question and challenge everything she sees or hears. She believes it provides her with excellent material for her comedy while keeping her brain active.

Here is a video of Athena Kugblenu in one of her comedy shows.

Athena Kugblenu is one of those people whose presence immediately dominates the room they walk into. She manages to excel in all her professions while being a mom which is a feat in itself.

She has been dominating her field every step of the way and is likely to continue down the same path and expect to see more of her on TV soon!