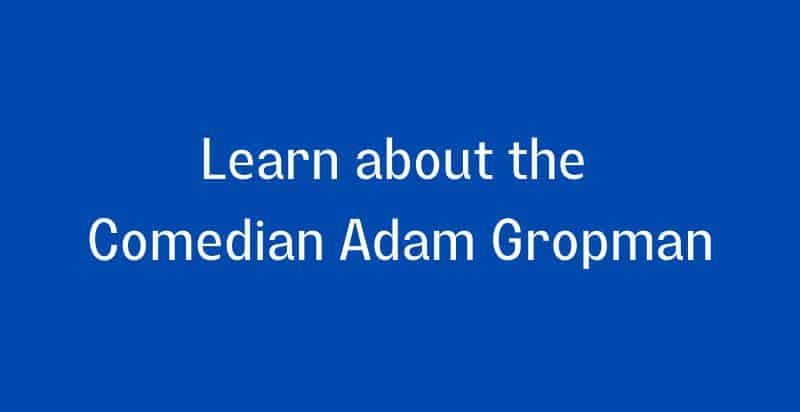 Adam Gropman is an American comedy writer, speechwriter, professional journalist, and standup comedian. His portfolio of comedic work can easily fill the pages of any book and turn it into a guidebook of comedy material!

Such extensive experience has garnered Adam national and international fame in comedic circles. He has performed standup comedy in many parts of Southern California and acted in commercials and movies.

His comedy sketches and speeches are popular for the smart and honest writing material that steers clear of insults. Adam knows how to maintain a healthy balance between humor and offense. No wonder people find his performances entertaining and funny! If you have been a fan of this comedian for a long time, read on to know the most exciting bits about his career and how he became the comedian he is today!

Adam Gropman has been a standup comedy artist since the start of the 21st century. He has performed in many cities across the United States, including Los Angeles, New York, Boston, and San Francisco.

His unique and funny performances brought him back to many clubs across the country for performances. Some of those clubs are The Comedy Store, The Ice House, Laugh Factory, The Comedy and Magic Club, Gotham Comedy Club, Boston Comedy Connection, S.F. Punchline, Detroit Comedy Castle, etc.

2. Adam Was a Lead Singer in a Rock Band

Before Adam became a comedy writer and standup comedian, he led a rock band named Furious George. After returning home to Boston from Reed College, he tried many things in his hometown, and becoming a lead singer for a local band was one of them. Given his confidence as a standup comedian, he must have rocked the stage back in the day! Adam also used to work for Lotus Software and write music journalism.

3. Adam Founded a Sketch Group That Lasted for Four Years

Adam Gropman is not just an artist who loves comedy in all its forms; he is also an entrepreneur who loves founding groups and companies that encourage comedy and humor.

He used to be a founding member of a Los Angeles-based sketch group called Sketch Armstrong. The group lasted for four years and was good enough to earn an entry to San Francisco SketchFest. Sketch Armstrong also appeared at UCB LA and performed two full-length shows at Comedy Central Stage.

4. One of His Sketched from the Sketch Group Became a Short Film

Sketch Armstrong was a talented sketch group; after all, the founding member is an outstanding comedian and writer! The group once performed a sketch called “Insight into the Enemy.”

Adam wrote and starred in the sketch. The sketch was adapted for a short film directed by Marc Leidy. The short film gained Adam and his sketch group fame by becoming popular at the Smithwicks Cat Laughs festival in Ireland and HBO Aspen and Montreal JFL festivals.

Another sketch was written by Adam, “Wine Snob,” which was directed into a short film by David Zorn.

5. He Was into Humor and Comedy Since He Was a Kid

Despite the fact that Adam started liking standup comedy in the late 1990s, his love for humor, comedy, and jokes had been alive for much longer. He absolutely loved Saturday Night Live skits and fell in love with the comedic works of Richard Pryor, Mel Brooks with Carl Reiner, and George Carlin.

His parents had the records at home from these artists, and once Adam realized his love for comedy, he used to get his own comedy records of Steve Martin and Cheech & Chong.

6. Adam Used to Recite Steve Martin Bits for His Friends

While growing up, Steve Martin was one of Adam Gropman’s favorite artists, and he’d wholeheartedly memorize his bits and perform them for his 6th-grade friends at their table.

His impromptu shows got attention from his friends and helped him prepare for stage-worthy performances later in his life. Although his young friends did not get his comedic style back then, they sure helped him gain self-confidence in his work eventually!

7. He Produced a 4th Grade Play as a Kid

Adam’s love for humor and comedy was more profound than anyone thought, given the fact that he produced his 4th-grade play titled “Alexander Graham Cracker!”

As a young child interested in comedy, he would joke around and do silly voices to entertain his friends. And while doing all those carefree things, he also produced a play that laid the foundation of his future career as a comedy writer.

Maybe he didn’t know back then, but now Adam is sure he was meant to make people laugh with his words and acts!

After a four-year stint with his sketch group, Adam Gropman also started The Funny Business company. Instead of doing funny sketches for the crowd, this time, Adam focuses on custom comedy writing for people who want to show their funny sides to friends and family.

So anyone who comes to The Funny Business for a roast speech for birthdays, weddings, corporate events, and bar mitzvahs never goes empty-handed or disappointed.

Do you want to see Adam Gropman perform a funny sketch? Here’s a video where Adam Gropman explains his recent phone conversation with a professional bill collector.

Comedian Adam Gropman has been evolving as a comedic writer and performer since the early 2000s. Adam has been steadily becoming a comedy professional for any up-and-coming comedian with a list of standup comedy performances and writing material under his belt.

Ever since he started his company, Adam has worked on many funny scripts, including a short film script that was produced in West Texas. He has also sold “Frank N Funny” series greeting cards. From a young child performing in front of his friends to becoming a famous comedic writer, Adam has undoubtedly found his true calling!

Everything You Want to Know about Brian Monarch