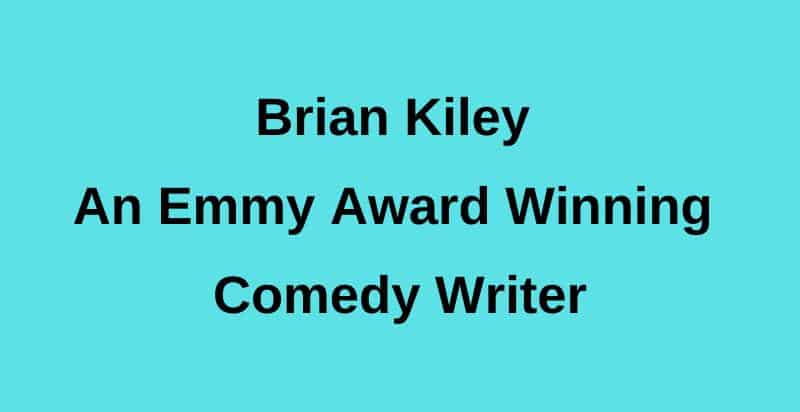 Brian Kiley is arguably one of the wittiest and sharpest comedians and writers in the United States. He has frequently appeared on various renowned shows such as The Tonight Show and The Late Show with David Letterman and Conan O’Brien. Brian Kiley has also been an Emmy award recipient as a writer for Late Night with Conan O’Brien.

Brian Kiley is currently working as the head monologue writer on the Conan staff, whom he has been with for more than 20 years. Let’s look at some of the most interesting things about this amazing writer.

Brian Kiley has also proven his talent in writing. He is the author of two books, Maybe Kevin and The Astounding Misadventures of Rory Collins, both of which received high praises from critics and the public.

Maybe Kevin is a book about a family torn by disputes in a post-World War 2 era. While the topic may seem common enough, Brian has weaved magic through his words and conveyed the messages and emotions in a praiseworthy manner. In a heavy topic like this, he has managed to insert several heartwarming and humorous moments that further bring life to an already colorful story.

His other book, The Astounding Misadventures of Rory Collins, has an appreciable blend of dark humor with powerful moments that will leave you thoughtful for a long time. The central theme of this story is about yearning for a normal life in a dysfunctional family. Brian has managed to make Rory Collins an endearing character whose misadventures make you laugh and simultaneously feel bad for him.

2. Brian Kiley Has Been Nominated Several Times for Awards

Brian Kiley is no stranger to awards. He has won six Writers Guild Awards and has been nominated for an Emmy award almost 15 times. He finally won an Emmy in 2007 for Late Night with Conan O’Brien.

3. Brian Kiley Was Once Featured in a New York Times Sunday Crossword

Brian Kiley, much to his surprise, has appeared in the famous New York Times Sunday crossword. He himself has never finished that crossword.

The various talents of Brian Kiley were displayed when he was given a recurring role on the Adult Swim’s comedy series “Delocated.”

Furthermore, he has been featured on “The Bonnie Hunt Show,” “Comedy Central Presents,” “Dr. Katz Professional Therapist,” “The CBS Morning Show,” “Spotlight Café,” “Caroline’s Comedy Hour,” “Comedy On The Road,” the Showtime Comedy Club Network, the TBS Conan writer’s special and “An Evening at the Improv.”

5. Brian Kiley Wanted to Be a Comedy Writer Since Childhood

During one of his interviews, Brian Kiley has stated that ever since he was a kid, he was always fascinated by comedy. Growing up, he dreamed of becoming a comedian and a comedy writer. He would make sure all his jokes were written as soon as they popped up in his mind.

He got the opportunity to present his collection of jokes in a comedy show in Boston but was rejected. This motivated him to take a summer school class, following which he started being a stand-up comedian. His first breakthrough came at the age of 25 when he was on CBS Morning Program.

Later on, he appeared on various comedy shows such as “Evening at the Improv,” “Comedy on the Road,” and “Caroline’s Comedy Hour” until he finally ended up on the “Tonight Show.”

6. Brian Kiley Is Brilliant as a Writer on Conan’s Show

On the “Tonight Show,” Brian Kiley uses a mixture of monologue jokes and short jokes about his life. He has an amazing sense of what ticks people the most and uses it expertly to deliver jokes which leave the audience in stitches. It is

Brian Kiley has appeared on the Late Show with David Letterman. He was one of the final comics to be personally hand-picked by David Letterman to appear on his show.

Brian’s performance on the Late Show was highly lauded by the audience. He delivered his witty one-liners and monologue jokes with a razor-sharp precision that had brought the house down. In his Late Show appearance, he talked about the struggles of dealing with your kids once they have grown up. This was a particularly relatable segment for his audience.

Brian Kiley has been a writer for Conan O’Brien for more than 16 years. He has been nominated for 15 Emmy awards. His jokes have been featured in TV Guide, GQ, Reader’s Digest, and the New York Times Sunday Crossword Puzzle. In this video, Brian is at the Flappers Comedy Club and Restaurant in downtown Burbank where he gave a stellar performance.

Brian Kiley is a successful comedian and writer who has proven his worth in the field of comedy. The fact that he has been a writer on The Late Night with Conan O’Brien for more than 20 years is a testament to his ingenuity. With an Emmy award under his belt, it is no wonder that he has made a name for himself.

Armando Anto – An Up and Coming French Comic