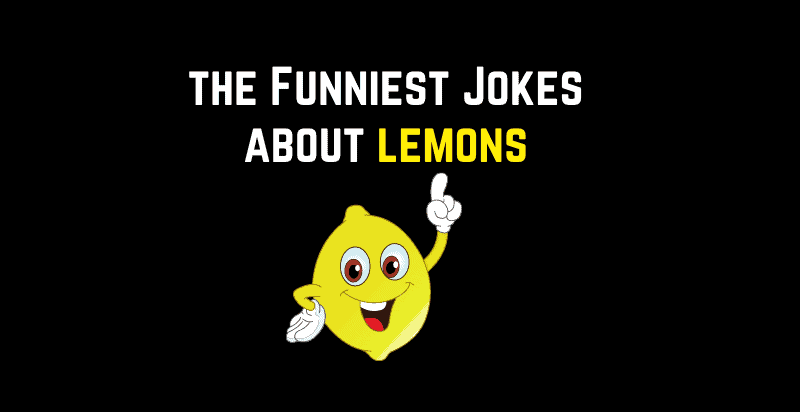 Have you ever heard the phrase: “if life gives you lemons, make lemonade?” Well here at JokesnJokes.net we believe that it means it is time for some LOL Lemon Jokes.

The Best Lemon Jokes to Make You Laugh

Walking down the road, I passed an apple pie, a lemon cheesecake, and ice cream.

I thought the streets are desserted!

Went to the shop today to buy some lemons and apples, but they didn’t have any.

It was a fruitless trip.

Why was the lemon depressed?

It lost all of its zest
Why did the lemon pie go to the dentist?
Because it needed fillings!

A lemon was given only 10 minutes to clean her house so she hired… A Minute Maid.

How do you make a lemon drop?

Hold it high and let go.

Why was the lemon by himself?

Because the banana split.

They always squeeze the day.

What did the lemon in the salad say to the tomato?

“Give me a squeeze”

Why did the lemon cross the road?
He wanted to play squash.

Which citrus fruit is bitter and green?

A lemon in a green jumper.

How do you make a lemon puff?

Chase it round the garden?

One lemon said to the other lemon,..

“We are zest friends forever!”

The lemon lawyer declared… “I zest my case!”

The lemon failed its driving test because it kept peeling out.

The search for the stolen lemons was fruitless.

The lemon robbed the bank with its partner in lime.

When a lemon works overtime it gets paid half a lime.

Why did the lemon go out with a prune?

Because she couldn’t find a date.

What did lemon say to lime?

Why did the lemon fail his driving test?

It kept peeling out.

Why did the lemon go to the doctor?

What is yellow and solves your problems?

Lemonade because its yellow and aid solves your problems!

When life hands you lemons, find someone with tequila and salt.

What did lemon say to lime?
Nothing stupid, lemons don’t talk.

A lime, a lemon, and a pea walked into a bar…

An old man walks into a bar and sees a jar full of wrinkly, dried up lemon rinds…

An old man walks into a bar and sees a jar full of wrinkly, dried up lemon rinds. He sits down and orders a beer from one hell of a beefy, muscled bartender. He takes a shakey sip from his dark, dark beer, puts it back down, and asks about the lemons as old and shriveled as he is.

I was doing a crossword the other day and my girlfriend asked “What’s the clue?” I said “Lemon and lime carbonated drink ” she replied ” 7up ?”

I said “Nah three across”…

The local bar was so sure that its bartender was the strongest man around that they offered a standing $1000 bet.
The bartender would squeeze a lemon until all the juice ran into a glass, and hand the lemon to a patron. Anyone who could squeeze one more drop of juice out would win the mo…

So, apple, lemon, and pea escape from the refrigerator..

Happy to be free from their prison, they go to a bar to celebrate. Many bars later, they’re all tipsy at best when they come across a hill.
Pea, being a energetic drunk, gets super excited saying, “Hey! Let’s roll down the hill! Come on!” And before the other two object he launches hims…

A woman is walking through the park when she sees a very attractive man sitting on a park bench. He’s reading a book and eating some fruit out of a Tupperware container. Slowly the woman gathers the courage to go ask the man out.

So, she walks over and takes a seat next to him on the bench, turns to him and says, “Sorry to bother you. I know this may be a little forward but I would love to grab coffee with you some time.” Flattered, the man responds, “Sure… but what makes you so certain you and I would get along so well?”<…

I always take life with a grain of salt…

Plus, a slice of lemon. And a shot of tequila.

I started a honey and lemon diet.

In the span of five months, I’ve lost 5 kg of lemon and 2 litres of honey.

If life gives you lemons…

Apply it on your hair, it’s good for preventing dandruff.

I walked into a cake shop in Glasgow…

…and there it was, the finest pastry case filled with a glorious yellow jelly and topped with the fluffiest beaten egg white. I didn’t know what it was so I asked, “Is that a lemon tart or a meringue?” “Aye, it is a lemon tart.” The shopkeeper replied, “yer no wrang.”

Those are the pie rates of the carribean.

An orange, a pea, and a lemon are barhopping

They visit bar after bar, getting as many drinks as they can before they’re cut off, and getting further away from home.
Orange notices a large hill, and suggests rolling down it to get back home. The pea and the lemon think this is a great idea, and they all climb up the hill.

If life gives you lemons, you should make lemonade.

And try to find somebody who’s life gives them vodka, and have a party.

I was selling lemons the other day outside my house

And a man came up to me and asked “can I just buy the peel?” I was surprised by this and stared him dead in the eyes before I said “are you taking the pith?”

I walked up to a drunk guy with a lemon

Why is it better to smell roses and lemons than poop?

Sherlock and Watson are browsing the market, when they come across a stall selling lemons.

“I wonder,” says Watson, picking up a lemon and examining it closely. “Exactly where do these fruits come from?” “Well,” says Sherlock, plucking the lemon out of Watson’s hands. “It’s a lemon tree, my dear Watson.”

Cause it’s got meringue on it.

What do you call an attractive, Jewish lemon with no worldly possessions?

There once was a religious young woman who went to Confession.

Upon entering the confessional, she said, ‘Forgive me, Father, for I have sinned.’ The priest said, ‘Confess your sins and be forgiven.’ ……
The young woman said, ‘Last night my boyfriend made mad passionate love to me seven times.’ The priest thought long and hard and then s…

I got my paycheck with a lemon slice on it today…

turned out my ex-wife was garnishing my wages.

“Why are you doing that, Holmes?” Dr. Watson asked.
“Lemon-entry my dear Watson,” Holmes replied.