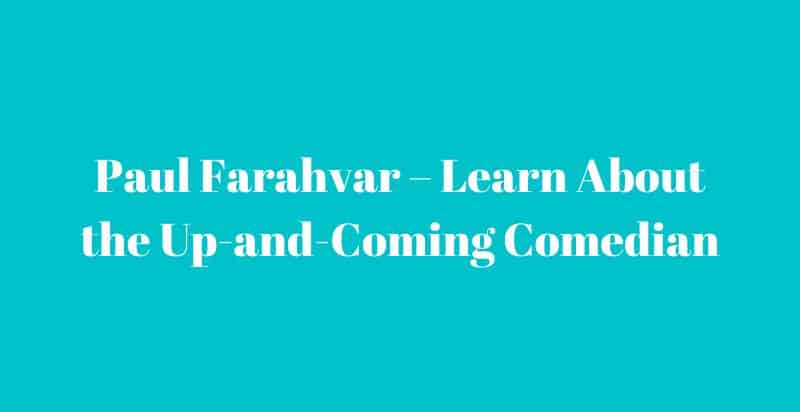 Paul Farahvar is a popular comedian from Chicago who is known for his self-deprecating and dry humor. He has been making audiences laugh all over the USA by doing stand-up on known comedy platforms such as the Laugh Factory, Comedy Bar, and Zanies. Paul is a single child and comes from a Middle Eastern background, which has become the premise for his jokes about his parents being disappointed with his career choices. He has also hosted and produced his comedy game show “Everyone’s a Lawyer” on Laugh Factory. Paul is also the host of well-known podcasts from Chicago called “MAKE US A MIX TAPE” and “SINGLES ONLY!”. If you would like to learn more about the talented comedian, Paul Farahvar, keep on reading this article.

Here Are Some Lesser Known Facts about Paul Farahvar

Paul Farahvar hosts two comedy podcasts. They are well-loved podcasts by fans called Singles Only! And Make Us a Mix Tape. The Singles Only! podcasts feature single guests (similar to Paul), comedians, producers, hosts of other shows, and even sports anchors.

Paul and his co-host Patti Vasquez talk to guests about comedy, music, sports, dating, and other interesting topics to humor audiences. Fans who want to support Paul can also show love by supporting the show with money. This podcast is available on SoundCloud and has also been SWSW 2020 and the Best Podcast 2021 of Chicago Reader.

2. Paul has been working in the comedy industry for more than 10 years

Paul has been in the comedy industry for more than ten years. Paul used to work as a lawyer full time before pursuing comedy as a career path. After leaving his career in law in Chicago, Paul gave his full attention to comedy and worked hard on developing good material which his audiences loved. During his successful ten years in comedy, Paul has headlined for nationally famous comedians and has toured around multiple cities of the United States. Paul believes in hard work and hopes that he will be able to find his voice with his strong work ethic and acumen.

Paul is a comedian who respects young artists and advises them to “respect the process in the comedy”. There are no shortcuts in the comedy industry, and people have to work hard to find their unique personal voice in the industry. Paul says that great opportunities will come and will offer you the chance to show off your skills on a good platform, but you will have to be careful.

These opportunities can allow young comedians to grow and teach them important lessons about comedic performance and writing. Paul Farahvar believes strongly that if someone wants to pursue comedy as a career, they must improve their humorous act on stage and build their individualistic voice. Paul references his early growth and says that work ethic is not all needed for growth; you also need to take advantage of the opportunities you get and learn from them.

Jared Goldstein – The Quirky and Talented Comic From Los Angeles

4. Paul regularly features on some of the best comedic stages

Paul is an up-and-coming name in the comedy scene. Paul has been featured at various comedy stand-up clubs in Chicago. Some of the places where Paul has delivered his best performances are the Comedy Bar, Zanies, and The Laugh Factory. Paul has also performed at The Plano House of Comedy in Texas, Gman Tavern, and more popular spots.

5. Paul has a unique and dry sense of humor

Paul has a dry and witty sense of humor. His jokes usually take the audience by surprise. Paul is not afraid of making jokes that the audience would find offensive. Paul often jokes about his Middle Eastern background and the stereotypes in his comedy routines. Paul Farahvar is not shy of making self-deprecating jokes about himself.

Paul has the talent and the skill to get audiences laughing with him no matter what the case may be. He adeptly shut down a heckler once with a savage joke which made audiences appreciate him for standing up for himself.

7. Paul Farahvar looks up to the comedian Bob Saget

Paul considered Bob Saget to be a great inspiration for his comedy. Bob Saget passed away in 2022, and Paul honored his memory by tweeting about how he had changed the projection of Paul Farahvar’s life. He expressed his disbelief at the icon’s death and wrote about how he met him by accident once.

Bob Saget was an extremely positive influence for Paul and was the main reason why Paul was inspired to take up comedy. Paul tried on multiple occasions to let him know exactly how much Bob Saget had to do with his origin story and what a positive influence he had been on him.

8. Paul writes a blog regularly about his comedy career

Paul writes a blog on his website regularly about his life, inspirations, and comedy career. He writes in the blog candidly and shares his struggles, wins, and hopes (in the form of new year’s resolutions) about his career with his readers.

9. Paul’s comedy mostly focuses on his parents and his dating life

Paul’s comedy mainly focuses on his interactions with his Middle Eastern parents. He often jokes about how he knows how to work with children because of his parents, although he does not have children. Paul adores his parents, which shows in his comedy routines as he makes fun of their love for Costco, more than three-decade-old vases, and their ignorance of the severity of danger of the coronavirus pandemic. Paul also celebrates his singledom in his comedy and shares his humorous belief with audiences that he does not have to marry since he has a full head of hair.

10. Paul is also a comedy writer

Paul is not just a stand-up comedian but is also a great comedy writer. Paul has been the comedy writer for “Off the Mound with Ryan Dempster” for Marquee’s network. He has also made a comedic YouTube sketch about drug dealers and briefcases he acted in.

Paul was featured in the famous NBC show called Chicago Med. He played the character “Karam Haddad” in the show in 2017.

Is Paul Farahvar an attorney of law?

Paul used to work as a partner in a law firm before his comedy career. Paul also has a famous tagline, “Better Call Paul,” which resembles the show name ‘Better Call Saul’ about a crooked lawyer.

Paul Farahvar is an up-and-coming comedian from Chicago who has been causing waves with his hilarious comedy routines. Paul is the host of two popular podcasts where he features different guests regularly. He is also a talented comedy writer and has written for “Off the Mound with Ryan Dempster.” Paul is a talented comedian people should look out for. He is well active on social media platforms such as Instagram, YouTube, and Twitter and posts comedic posts regularly.

Who is Anica Cihla