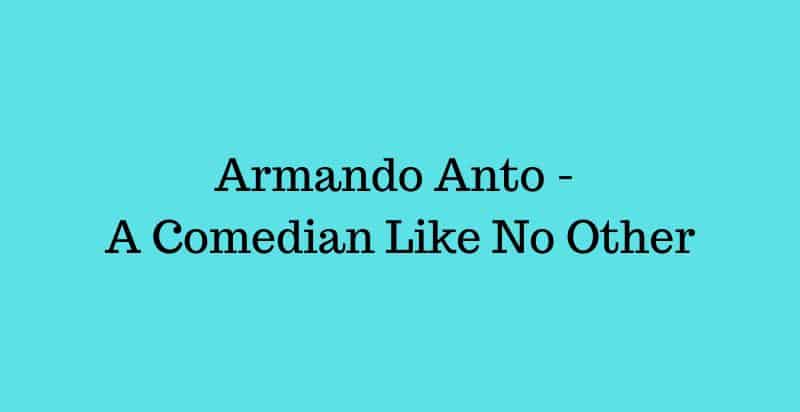 Armando Anto is a French-American comedian and a violinist who has been putting a smile on the faces of thousands of people through his unusual comedic scripts that often revolve around his French heritage. Over the years, Anto has amassed quite a bit of recognition in the comedy world by performing and competing in countless festivals and competitions. Let’s take a look at 8 noteworthy facts about Armando Anto.

1. Armando Has Appeared on the Dry Bar Comedy Series

Dry bar comedy is a comedy series produced by VidAngel Studios and was conceived back in 2016. The show features three comedians on every episode with different comedians performing every night. the comedy specials can be streamed on the Dry Bar Comedy app or on VidAngel.

The shows air every Friday and Saturday night. The major highlight of the series is that it features only clean and mostly family-friendly comedy. The ongoing series has released 215 great episodes featuring a number of up-and-coming episodes.

On 8th January, 2021, Armando Anto was featured on the 4th episode of the 6th season of the Dry Bar Comedy specials. His performance centered around his experiences in concerts and meeting his first American girl. The episode was also written by Armando.

2. The Comedy Star Competed in Bring The Funny NBC

The series, hosted by Amanda Seales – a comedian – showcases a variety of comedians performing in front of an audience. The winner of the competition would take home a reward of $250,000. The first season had 11 episodes, including ten regular episodes and one special results episode for the finale. Chrissy Teigen, Kenan Thompson, and Jeff Foxworthy were among the judges on the show. The show was held in four stages: the open mic round, the comedy clash, semi-final showcase, and the finale.

Armando Anto was among the 40 contestants that participated in the show but unfortunately could not make it through the open mic stage. However, being selected for participating in the show is a commendable achievement in itself.

The AV (Antelope Valley) Comedy Festival is a two-day American comedy competition hosted by Entertainment Max and Lancaster Performing Arts Center at the Lancaster Performing Arts Center. This weekend of laughs features 40 of the best rising comedians from all over America and bids them against each other in an enticing competition for a chance to win a prize of $10,000.

Armando Anto competed in the 2019 edition of the competition which spanned from the 6th to 8th of September. The comedy talent came out as a finalist in the competition out of 40 great talents.

4. The Comedy Maestro Performed at the Burbank Comedy Festival

The Burbank Comedy Festival is a comedy competition that brings together the biggest names in comedy, the best rising comedians, and renowned industry insiders in the Media Capital of the World for a night full of laughs in Downtown Burbank. This annual seven-night festival, which was initiated at the Flappers Comedy Club and Restaurant in 2013, has grown to six venues and now includes over 80 star-studded podcasts, shows, classes, industry discussions, afterparties, and more.

Some of the past headliners of the comedy fest include Tom Segura, Adam Carolla, Jimmy Dore, Joey Diaz, and many others. In the 2015 edition of the festival, Armando was one of the selected comedians that performed in the festival and was even awarded the title of Best of the Fest for his brilliant performance.

5. The Rising Comedy Star Is Also a Violinist

Born and raised in France, Armando Anto developed an early liking towards music, especially towards playing the violin. At the age of five, he began classical violin lessons at the French National Conservatory. Eventually, he turned his skillful talent into a source of income. After completing his BA in Finance, he set out on a world tour of violin concerts where he began teaching and showcasing his art.

Overtime, Armando began incorporating more and more elements of humor into his presentations after almost a decade of performing and teaching his profession. He realized that laughter is the key to one’s heart and mind, and that comedy helps people understand any topic better. Staying true to both of his talents, Armando soon became a standup comedian.

6. The Comedian Was a Finalist in the Big Sky Comedy Festival

The Big Sky Comedy Festival is a five-day national comedy competition that takes place in Billings, Montana. The competition features 28 of the top up-and-coming comedians from across North America to perform and compete against one another.

In the 2016 edition of the festival, Armando was one of the comedians featured in the competition. He went on to become one of the finalists and was highly praised for his clean and original scripts.

7. The Rising Comedy Star Has Won a Comedy Contest

Armando Anto won the 2015 Next Comic Standing Contest held in Hollywood. This is one of his biggest career highlights and a huge contributor to his rising popularity and recognition in the community.

8. Anto Was One of the Top Performers at the San Francisco Comedy Competition

Each year, hundreds of performers apply to participate in the competition. Only 32 of these applicants are picked for competing in one of two preliminary rounds, each lasting a week. The participants perform 5 to 7-minute long sets in these preliminary rounds, with the top five from each round moving on to the semi-finals. The ten comedians that proceed to the semi-finalists perform 10 to 12-minute sets. Five finalists are picked from this group. Finalists must perform sets ranging in length from 12 to 15 minutes. Comedians who go over or under the time limit are subject to penalties.

This Man Is a True Maestro Of Comedy. Armando Anto – Full Special

Armando Anto is truly a one-of-a-kind comedian with an unprecedented style of comedy. Anto’s trusty violin accompanies him on all of his performances, testifying to his muse for comedy and music. His hilarious scripts are brought to life by his French accent and the naivety of his tone. Over all, he’s a great comedian and excels at his profession.