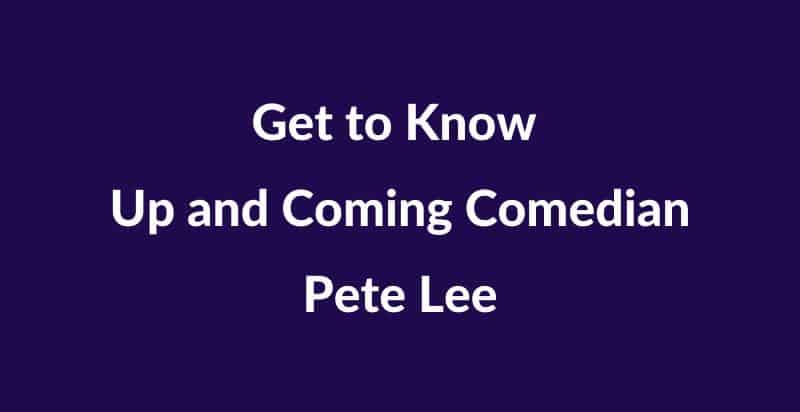 Pete Lee is an up-and-coming comedian from Janesville, WI, raised by divorced parents. He spent most of his childhood sitting in front of a 19-inch TV! That’s when his interest in entertainment began.

Comedian Pete Lee’s humor is joyful, making people laugh at his anecdotes with his charming presence. He is the nicest one of the bunch (given his career, that says something!). Unlike many comedians, he does not want people to get offended by his jokes. Nor does he get offended when people take breaks during his performances!

Let’s look at Pete Lee and his life as a comedian.

All You Need to Know about Pete Lee!

1. His Love for Comedy Is in His Roots!

For most of us, our childhoods determine what we want to become when we grow up. Pete Lee was no different as a young boy from Janesville, WI. When his divorced parents were not parenting him, he was learning valuable life lessons from his 19-inch television.

His love for entertainment started there, and he decided to pursue a career in this field! There are two options in the US for aspiring artists: they can go to New York or Los Angeles for their golden ticket. Pete moved to New York to make his dream come true because Wisconsin did not get his humor just yet.

He debuted on Comedy Central’s Premium Blend as a standup guy, only to realize that this stage was the only thing missing from his life! He decided to give himself the chance to become a famous comedian, so he moved to NYC.

2. The Real Reason We Know His Name Now!

Numerous standup comedians are making us laugh daily by performing at different comedy clubs and standup shows. Pete Lee used to be just one of the names, until one day Jimmy Fallon attended one of his live shows in NYC!

Pete got the recognition he wanted when Jimmy loved his performance. He invited Pete on his show, knowing that his audience would love Pete’s Midwestern style of comedy. When he appeared on The Tonight Show Starring Jimmy Fallon, People loved Pete so much that he received a standing ovation from the audience.

He became the first standup comedian to get that on The Tonight Show. His popularity got him an official regular spot on the show from Jimmy.

3. His Popularity Was No Joke When He Moved to NYC

After the debut, Pete Lee was sure that he needed to stay in NYC to find his true calling. His decision was the best one he made for his career, as he got selected to become a part of Montreal’s Just for Laughs Comedy Festival.

The festival hosts many comedians each year, and people voted him a standout performer when Pete debuted! His career was boosted when he made his debut on network television in 2008. He performed on NBC’s Last Comic Standing and became a semi-finalist.

The year had more in store for the comedian as he continued to climb the ladder of success after his NBC performance. The year 2008 brought him a television acting gig for CBS’s Soap Opera As The World Turns and a show of his own, Comedy Central Half Hour Special!

His Comedy Central gig brought him to the point of creating a cult following in the comedy scene. People started loving him across all comedy clubs and wanted to watch him perform live. He spent the next ten years of his life doing just that by visiting over 500 colleges across the country.

4. While He Toured, He Had Other Things to Do

Pete Lee’s career as a standup comedian officially took a turn in 2008. There was an acting offer, a standup gig, work on network television, and so on. While he toured around the country for the next ten years, he continued to get better offers from multiple places.

Starting with his internet popularity in 2010, Pete edited and produced his own shows on the internet, leading MSN.com to offer him a web show called New York Minute: 30. The web program led to TV talent scouts noticing him.

He became a writer for FUSE TV’s Video on Trial and NFL Network’s Top 10’s in 2012, also participating in the shows as a cast member. VH1’s Best Week Ever also saw him perform as a cast member and writer for three seasons, starting in 2013.

To top it all off, he debuted in his very first late-night show on CBS’s Late Show with David Letterman the same year. All this happened long before he appeared on Jimmy Fallon’s show and got a standing ovation.

5. His Comedy Style Was Refreshing for New Yorkers

People who have watched Pete’s live performances understand what it’s like to see a Wisconsin boy making New Yorkers laugh! He has a pleasant personality, unafraid to use his Midwestern roots as a topic for humor.

He even used his friendly personality and smiling face as a conversation starter for his debut in The Tonight Show Starring Jimmy Fallon in 2018. The audience loved how he compared his different upbringing to the ways of New York City!

6. His Road to Success Is Paved with Humor

Pete Lee’s talent and passion for humor is the reason for his success in the comedy industry. Although he is only now getting recognized for his work globally, his comedy peers are already aware of his talent!

Pete has many comedy shows and segment names under his belt now. He has been a cast member on TruTV’s Greatest Ever and a regular for the same network’s Comedy Knockout and Roast Battle. He also has a segment with Nickelodeon called Nick Toons.

If you have not heard of these shows, you may recognize Duck Dynasty. Yes, that’s also one of the programs where Pete’s writing is the reason for your entertainment. He continues to be a part of Comedy Central, too, with his show called, This Week at the Comedy Cellar. He is part of the cast and the writing team.

Pete Lee talks about being a Wisconsin boy in New York City and describes what it’s like when everyone assumes you’re gay. Watch the video to see why he is becoming so famous in the comedy scene!

Pete Lee has been successfully making his name in comedy circles behind the scenes since 2008. He has famously worked with several recognized TV shows and networks, but unless you are a true comedy buff, you may not know his name!

Jimmy Fallon’s invitation gave Pete Lee the chance to perform in front of a larger audience. Moreover, his years spent touring around the country, performing at different colleges, while working towards his television career played a significant role in his status as an up-and-coming comedian!

Now that you know what he looks like, ‘the pale guy with a smile on his face’ (his words!), it may be easier for you to spot Pete Lee’s comedy videos online and enjoy his pleasant humor.

Lachlan Patterson – A Comedian and A Screenwriter

Zane Helberg – The Comedian from “Live from Rehab”