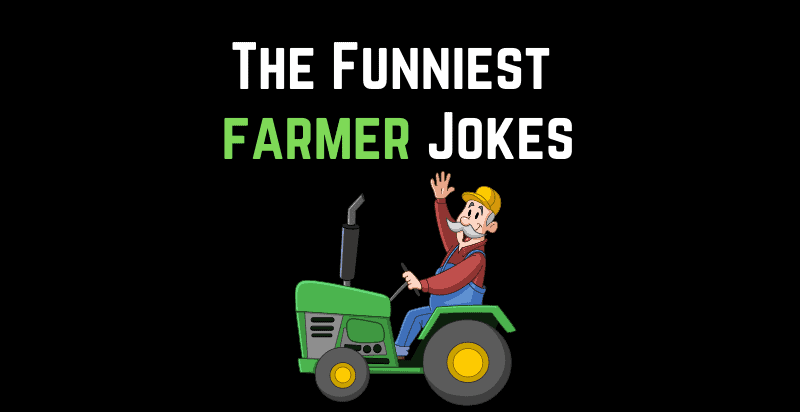 Farmers are the punchline of so many jokes. They are often silly humor that appeals to kids and very family friendly. Without further ado, we present some of the funniest farmer jokes. Enjoy!

Let’s start with some funny one liners and puns.

Did you hear about the magic tractor?
It turned into a field!

What kind of things does a farmer talk about when they are milking cows?
Udder nonsense!

Why do cows have hooves instead of feet?
Because they lactose!

Which farm animal keeps the best time?
A watch dog!

What is a farmer’s favorite Bruce Springsteen song?
Born in the USDA.

As farmers, we hear a lot of jokes about sheep.
We’d tell them to the dog, but he’d herd them all!

What did the mommy cow say to the baby cow?
“It’s pasture bedtime!”

What did the mommy cow say to the baby cow?
“It’s pasture bedtime!”

What is a happy farmer’s favorite candy?
A Jolly Rancher.

What do you call a sleeping bull?
A bulldozer.

Why did the farmer feed his pigs sugar and vinegar?
He wanted sweet and sour pork.

What’s the quietest animal on a farm?
A ssshhheep.

What do you call a cow with two legs?

How do farmers party?
They turnip.

What did the Idaho farmer plant when he was not sure if he was going to sell the crop?
Spectators.

What’s it called when a tractor waits for a pedestrian to cross?
Crop yield.

No Such Thing As A Free Ride

A farmer and his wife went to a fair. The farmer, who had never been on an airplane, was fascinated by a stunt plane and asked the pilot how much a ride would cost.
“$20 for 3 minutes.” the pilot replied.

“That’s too much.” said the farmer.

The pilot thought for a second and then said, “I’ll make you a deal. If you and your wife ride for 3 minutes without uttering a sound, the ride will be free. But if you make any sound at all, you’ll have to pay me the $20.”

The farmer and his wife agreed and went for a thrilling ride. After they landed, the pilot said to the farmer, “I want to congratulate you for not making a sound. You are a brave man.” “Maybe so,” said the farmer, “but I gotta tell ya, I almost screamed when my wife fell out.”

The Farmer and the Old Mule

An old hillbilly farmer had a wife who nagged him unmercifully. From morning til night (and sometimes later), she was always complaining about something. The only time he got any relief was when he was out plowing with his old mule. He tried to plow a lot.

One day, when he was out plowing, his wife brought him lunch in the field. He drove the old mule into the shade, sat down on a stump, and began to eat his lunch. Immediately, his wife began haranguing him again. Complain, nag, nag; it just went on and on.

All of a sudden, the old mule lashed out with both hind feet; caught her smack in the back of the head. Killed her dead on the spot.

The old farmer said, “Well, the women would come up and say something about how nice my wife looked, or how pretty her dress was, so I’d nod my head in agreement.”

“And what about the men?” the minister asked.

“They wanted to know if the mule was for sale.”

Chicken Or The Seed

When he returns for the fourth time, the owner’s curiosity is too much for him, so he asks the farmer why he keeps coming back for so many chicks. The farmer says, “Well, I guess I must be doing something wrong, but I don’t know what. I think I’m either planting them too deep or too close together.”

Bemused by his lack of success, the farmer sends off a report of what he has done to the local agricultural school, asking for advice. Three weeks later, the reply comes back, saying simply, “Please send soil sample.”

Related: The Funniest Jokes about Chickens