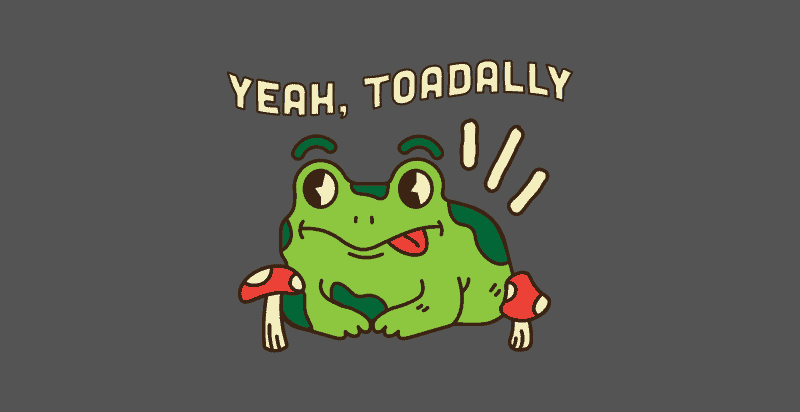 Frogs are green and slimy and everyone seems to love them. Frogs are amazing creatures. For example did you know that they don’t need to drink because they absorb water through their skin? Or that they can jump over 20x the length of their body? (That would be like if you could jump 120+ feet!)

Frogs are fascinating and kids love them. They often have been featured in funny kid cartoons. And we all know about the princess who kisses the toad and turns it into a prince!

Without further ado, these are the funniest frog jokes – they might even make your eyes bug out with laughter!

The Funniest Frog Jokes Ever

Why are frogs so happy?They eat whatever bugs them!

What does a frog wear on St. Patrick’s day? Nothing!

What did the frog dress up for on Halloween? A prince.

How many frogs does it take to screw in a light bulb? One frog and 37 light bulbs, slippery hands, ya know.

What’s the preferred car of frogs? The Beetle.

What’s green and jumps? A frog!!

What’s green and dangerous? A frog with a hand-grenade.

What’s white on the outside, and green on the inside? A frog sandwich!

What do you say to a hitch-hiking frog? Hop in!

What happens when two frogs collide? They get tongue tied!

Why did the frog stop in the middle of the road? To get hit by a steamroller

How can you tell if a frog doesn’t have ears? You yell “Free Flies” and he doesn’t come.

What do you get if you add milk? Frog nog!

What happens if you drink frog nog? You Croak!

What do ya call a frog’s favorite soda?Croaka-Cola!

Why did the motorcycle rider buy a pet frog? To pick the flies out from between his teeth!

How deep can a frog go? Knee-deep Knee-deep!

What does a Romulan frog use for camouflage? A croaking device!

What happened to the cat and frog when they got run over? The cat had nine lives, the frog just croaked.

Why did the frog say meow? He was learning a foreign language.
How come the frog didn’t get to be the Easter Bunny? Slippery hands…they were afraid he’d drop the eggs!
What’s green and red?
A very mad frog.

What’s green with red spots? A frog with the chicken pox!

What’s green with bumps? A frog with the measles!

What’s black and white and green? A frog sitting on a newspaper.

What kind of shoes do frogs wear? Open toad!

What do frogs do with paper? Rip-it!

How does a frog feel when he has a broken leg? Unhoppy.

What happens when you mix a frog with a bathtub scrubby-mit?
A rubbit!

Why did the frog read Sherlock Holmes?
He liked a good croak and dagger.

What happened to the frog’s car when his parking meter expired?
It got toad!!

What is a frogs favorite time?
Leap Year!

Why did the frog go to the mall?
Because he wanted to go hopping.

Why did the frog walk across the road?
He didn’t… he jumped.

Why did the frog cross the street?
Because the chicken crossed the road.

Why did the frog cross the road?
To see what the chicken was doing.

Related: Dog Jokes That Will Make you LOL

Why did the frog cross the road?
Some mean little kid super-glued it to the chicken.

How do you confuse a frog?
Put it in a round bowl and tell it to take a nap in the corner.

How does a frog confuse you?
When he comes out and says he needed that nap and feels much better.

What did the frog say to the fly?
You are really starting to bug me!

What does a frog say when it sees something’ great?
Toadly awesome!

What do you call a frog with no legs?
It doesn’t matter- he won’t come anyway.

What do you call a frog with legs? Dinner.

What did one frog say to another? You’re such a WART!

Why did the frog croak? Because he ate a poisonous fly!

What is a frog’s favorite game? Croaket

What did the frog order at McDonald’s?
French flies and a diet Croak

Why did the frog go to the hospital?
He needed a “hopperation” !

What is the thirstiest frog in the world?
The one who drinks Canada Dry!

The Most Hilarious Gorilla Jokes!

What’s red and green and goes 175 miles an hour?
A frog in a blender.

What do stylish frogs wear?
Jumpsuits!

What has more lives that a cat?
A frog that goes croak every night.

Why did the frog go to the bank with a gun?
He wanted to robbit.

Why are frogs such liars?
Because they are amFIBians

How can you tell a frog doesn’t have ears?
They don’t move when a car is coming toward them.

What did the frog do after it heard a funny joke?
It started to croak up!

A drunk is sitting at a bar, and says, “Bartender! Another drink.” The bartender shakes his head and says, “No you’ve had enough.”

“Well,” the drunk says. “How about if I show you something really cool? Then will you give me a drink?”

“Sure,” the bartender says. “But it’s gotta be pretty cool.”

The drunk takes a tiny piano and a frog out of his pockets and sets them on the bar. The frog starts banging away, playing a beautiful song. The bartender gives him a drink. The drunk downs it, and orders another.

“No way,” the bartender says. “Now you’ve really had enough.”

“If you give me a drink, I’ll show you something even cooler,” says the drunk. The bartender agrees. The drunk pulls out a rat, and sets it next to the piano. The frog starts banging away again, and the rat starts singing to the music. The bartender is amazed, and gives him another drink.

A man who had been watching all this comes up to the drunk and says, “You’ve got a million dollar act there. I’ll give you $500,000 for them right now.”

“Not for sale,” the drunk croaks.

The drunk agrees, and the man pays him and leaves.

The bartender says to the drunk, “What did you do that for? You broke up a million dollar act!”

“Not really,” the drunk says. “You see, the frog’s a ventriloquist.”

A frog telephoned the Psychic Hotline and was told, “You are going to meet a beautiful young woman who will want to know everything about you.” The frog said, “That’s great! Will I meet her at a party, or what?”

“No,” said the psychic, “Next semester in her biology class.”

A man walks in to a doctors office with a frog on his head. The doctor leaps up and says: “Good grief, how on earth did you get that great ugly thing!”

The frog looks down and replies: “I dun no Doc, it started out as a little wart on my bottom!”

There was a really cute princess walking through the woods, and she heard a voice calling, “Hey Really Cute Princess!” She looked around and didn’t see anyone but a frog.

She started to walk on but the frog called again. “Hey Really Cute Princess, if you take me home and let me sleep on your pillow, I will turn back into a Handsome Prince!”

It had been a very boring day so she decided to give it a try even though she really didn’t believe the frog.

The Really Cute Princess took the frog home with her and let him sleep on her pillow. When she got up the next day what do you think she found? There on her pillow sat a really Handsome Prince.

Do you believe the story?

Well neither did her mother!

The Biologist Stumped by the Frogs

Jim Finley, the noted biologist, was stumped. He’d spent months studying the little green frogs in the Keefo swamp. The population, despite all efforts at predator control, was declining at an alarming rate.

Finally, Finley went to the chemistry department at his college to see if anyone there might be able to help. Tom Trump looked into the problem, and came up with a solution.

The little frogs had succumbed to a chemical change in the swamp’s water, and simply couldn’t stay coupled long enough to reproduce. Tom brewed up a new adhesive, made from a dash of this, a dash of that, and most critically, one part sodium.