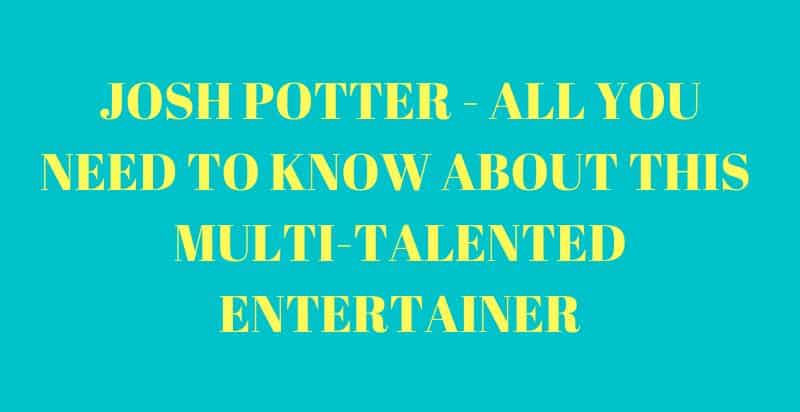 Josh Potter is a comedian, actor, producer, and foot model (yes, you read that right!) who hails from Buffalo, New York and now spends most of his time in Los Angeles, California because of his career. His self-deprecating humor has earned him a spot among some of the top up-and-coming stand-up comedians and has also brought his podcasts to the limelight.

Josh Potter has worked alongside renowned celebrities and entertainers in the comedy realm and has also won a few awards along the way. His podcasts also often feature famous celebrities and various up-and-coming entertainers, actors, and comedians.

Despite his fame in both Buffalo and Los Angeles, there are many who still don’t know much about this comedian/actor/podcaster/producer. With his multidimensional talent and career, there are, of course, several awe-inspiring facts about Potter.

Whether you’re contemplating booking him for your upcoming event or just want to check out a few facts about this up-and-coming stand-up king before following him on social media or attending one of his comedy shows near you, Jokes n Jokes is here to present all the information about Potter. So, get ready to leave this page with much more information about this comedian – Let’s dive right into it!

Josh Potter – All the Awe-Inspiring Facts You Need to Know

The following are some of the lesser-known facts about Potter, his comedic career, and other professional endeavors:

1. He Worked His Way Up With Gigs, Opening Acts, and Radio Shows

Potter, a proud Buffalo native, started his career as a comedian by hosting local gigs and appearing as an opener for the national acts in his local community. Moreover, he also worked as an RJ on the morning radio. Following his local gigs, Potter was granted the opportunity to open for Tom Segura, a renowned comedian with several Netflix specials to his name, in 2017.

2. He Was Offered a Production Role by Segura

Segura found himself impressed by Potter’s comedic role and various other professional endeavors. So much so that he offered him a production gig in Los Angeles.

Now, Potter not only works as a producer for Segura and his wife Kristina Pazsitsky’s podcast, Your Mom’s House but has also appeared as a guest on numerous occasions. Additionally, Segura also asked Potter to join him on one of his nationwide tours. When asked about working alongside Segura, Potter said,

3. He Was the Assistant Producer for WEDG’s Shredd and Ragan Show

Your Mom’s House wasn’t the only show he has produced; Potter had tried his hand in the production realm before as he accepted a role working as the Assistant Producer for WEDG’s Shredd and Ragan Show, which is a talk radio show based in Buffalo, New York. He worked in this role between 2004 and 2017, shortly after which he moved to LA, CA.

4. He Has Won the Helium Comedy Club’s Comedy Competition

Helium Comedy Club is a contemporary entertainment venue and facility that organizes a number of events throughout the year and has established an excellent reputation in approximately five different locations in the United States of America. Potter celebrated a win when he participated in the Comedy Competition hosted by Helium Comedy Club and came into the spotlight for his self-deprecating humor.

5. He Has His Own Podcast Now!

Formerly known as the Roach Motel Podcast, Josh Potter also hosts his own show, available on Apple Podcasts, called The Josh Potter Show. He also shares short clips from the podcast on his YouTube channel, where he is often heard discussing current events, sports, and other important (and unimportant) things.

Pinky Patel – A PTA Mom Turned Comedian or the Other Way Around?

6. He Has Worked Alongside Colin Quinn and Joey Diaz

Segura is not the only person Potter has had the opportunity to work with. He has also been seen working alongside Colin Quinn, a well-known stand-up comedy king who has worked as a cast member on Saturday Night Live. Moreover, Potter has also had the esteemed pleasure of working with Joey Diaz, aka Joey “CoCo” Diaz, a Cuban-American comedian who has also worked as a cast member for a variety of movies and television shows.

7. He Connects With Fans on Numerous Social Media Platforms

Despite his understandably busy life, Potter doesn’t shy away from connecting with his fans through various social media platforms. You can catch him on live streaming platforms such as Twitch, where he attracts a huge fan following with his personal stories and take on sports, entertainment, music, and a lot more.

If you see pictures or videos of Potter’s feet on his social media channels, don’t be surprised. Some fans only follow him because of the gorgeous sneak peeks of his hairy, bear fur-covered feet. He also extends personalized shout outs on the Cameo platform.

Want to watch one of the episodes of The Josh Potter Show? Watch him get to work in his studio with our very own Roach Queen Chase O’Donnell!

She’s here to teach you how not to get scammed and share some of the worst dates she’s been on. Plus, an update on the runaway Alabama inmate and correctional officer story we followed last week. Hit those lights, grab a crumb, and enjoy this episode:

Josh Potter was born four months prematurely, due to which he had to undergo approximately five eye surgeries. He has 0% vision in his right eye.

Where Does Josh Potter Live?

Apart from his comedy career, Potter has also made a name in the entertainment industry as a producer and a podcaster. You might have also come across his name when hearing about gorgeous photos of feet and unbelievably messy apartments.

If you’ve enjoyed getting to know this hilarious comedian, be sure to check out some of our other blogs covering other up-and-coming personalities from the comedy circuit.

Other Up-and-Coming Comedians to Look Out For