The Best Jokes about God 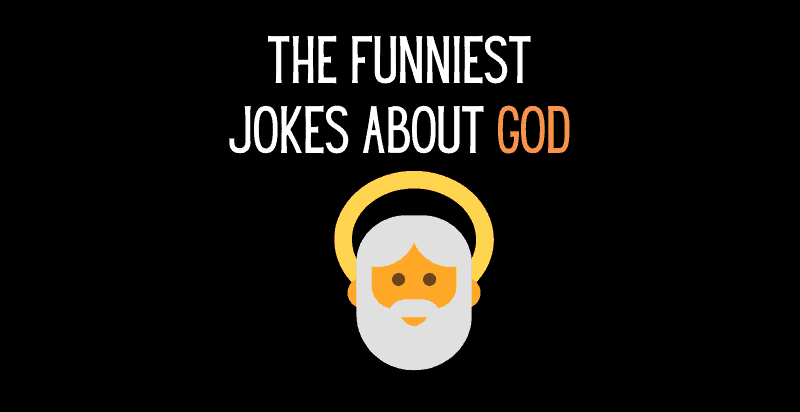 People have been making jokes about god for centuries. The first jokes were told by the ancient Greeks and Romans. These jokes were humorous stories about how the gods made mistakes and then laughed at them. Humans have been making jokes about gods since the beginning of civilization, as far as we know. Today we have the best collection of these jokes just for you, our audience!

The Best Jokes about God

God – One Liners, puns, wit, and other fun

What did God’s people say when food fell from Heaven? “Oh man-na!”

Man: Is it true that one billion years is like a second to you?

Man: Is it true that a billion dollars is like a penny to you?

Man: Then, could you please give me one penny then?

Is there a god?

What did God say after creating Adam?

I can do better.

What did God say after she made Eve?

She ignores my existence and only talks to me when she needs something.

How many women of god can you fit in a standard size brothel?

What did God do when yellow jackets started stinging the other animals?

If you’re not on your knees, he’s not interested.

One day God was looking down at Earth and saw all of the evil that was going on. He decided to send an angel down to Earth to check it out. So He called one of His best angels and sent the angel to Earth for a while. When she returned she told God, yes it is bad on Earth, 95% is bad and 5% is good.

Well, He thought for a moment and thought maybe He’d better send down a second angel to get another point of view. So God called another angel and sent him to Earth for a time too. When the angel returned he went to God and told him “Yes, the Earth is in decline. 95% is bad and 5% is good.” God said this was not good.
So He decided to send e-mail to the 5% that were good. He wanted to encourage them, give them a little something to help them keep going.
Do you know what that e-mail said?
—
—
—
—
Oh, you didn’t get one either, huh? Bummer.

There is this atheist swimming in the ocean. All of the sudden he sees this shark in the water, so he starts swimming towards his boat.

As he looks back he sees the shark turn and head towards him. His boat is a ways off and he starts swimming like crazy. He’s scared to death, and as he turns to see the jaws of the great white beast open revealing its teeth in a horrific splendor, the atheist screams, “Oh God! Save me!”

In an instant time is frozen and a bright light shines down from above. The man is motionless in the water when he hears the voice of God say, “You are an atheist. Why do you call upon me when you do not believe in me?”

Aghast with confusion and knowing he can’t lie the man replies, “Well, that’s true I don’t believe in you, but how about the shark? Can you make the shark believe in you?”

The Lord replies, “As you wish,” and the light retracted back into the heavens and the man could feel the water begin to move once again.

As the atheist looks back he can see the jaws of the shark start to close down on him, when all of sudden the shark stops and pulls back.

Shocked, the man looks at the shark as the huge beast closes its eyes and bows its head and says, “Thank you Lord for this food for which I am about to receive…”