The Funniest Jokes about Heaven 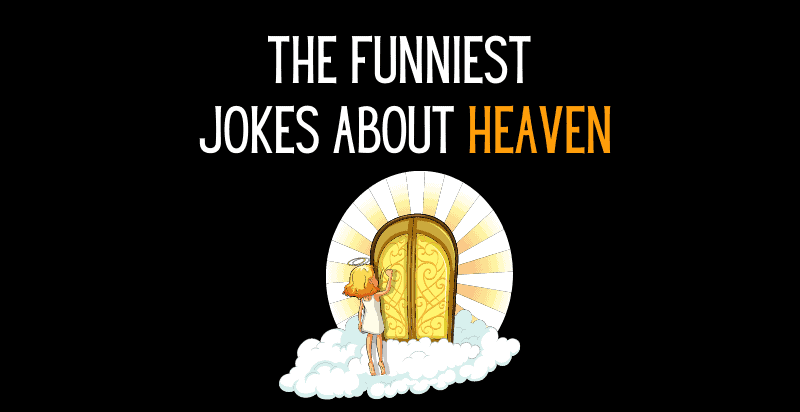 Does Heaven exist? This is one of the fundamental questions of all religions. What happens to after us after we die? This is an anxiety provoking question. And anytime something makes us uncomfortable, it is ALWAYS a great source of endless jokes and humor!

The Funniest Jokes about Heaven

Short Jokes about Heaven, including One Liners and Puns

What does god light his cigarettes with?
a match made in heaven .-.

On her deathbed my wife said, “Sweety, I will see you in Heaven.”
Since then I have kicked a puppy, stole from 4 shops and set fire to an orphanage.!

A lawyer dies and goes to heaven.
Haha just kidding.

So, a lawyer goes to heaven…
Just kidding.

God meets them at the pearly gates and asks if they have any questions. One of them says, “Yes, what were the real results of the 2020 election and who was behind the fraud?”

After a few seconds of stunned silence, the one guy turns to the other and whispers, “This goes higher up than we thought.”

A guy dies, goes to the gates of heaven, and starts telling Saint Peter a joke.

8 hours later, Peter finally gets impatient, interrupts him and says, “We don’t have forever, Norm.”

The cooks are French,
The policemen are English,
The mechanics are German,
The lovers are Italian,
The bankers are Swiss.

This is Heaven. This 85-year-old couple, having been married almost 60 years, had died in a car crash. They had been in good health the last ten years, mainly due to her interest in health food and exercise.

When they reached the pearly gates, St. Peter took them to their mansion, which was decked out with a beautiful kitchen and master bath suite and Jacuzzi. As they “ooohed and aaahed” the old man asked Peter how much all this was going to cost.

Next they went out back to see the championship golf course that the home backed up to. They would have golfing privileges everyday and each week the course changed to a new one representing the great golf courses on earth.

The old man asked, “What are the green fees?”

Peter’s reply, “This is heaven, you play for free.”

Next they went to the clubhouse and saw the lavish buffet lunch with the cuisines of the world laid out.

“How much to eat?” asked the old man.

“Don’t you understand yet? This is heaven, it is free!” Peter replied.

“Well, where are the low fat and low cholesterol foods?” the old man asked timidly.

The old man looked at his wife and said, “You and your bran muffins. I could have been here ten years ago!

A guy dies and goes to heaven. It’s a slow day for St. Peter, so, upon passing the entrance test, St. Peter says, “I’m not very busy, today, why don’t you let me show you around?”

The guy thinks this is a great idea and graciously accepts the offer. St. Peter shows him all the sights, the golf course, the reading room and library, the observation room, the cafeteria and finally, they come to a HUGE room full of clocks.

The guy asks, “What’s up with these clocks?”

St. Peter explains, “Everyone on earth has a clock that shows how much time he has left on earth. When a clock runs out of time, the person dies and comes to the Gates to be judged.”

The guy thinks this makes sense but notices that some of the clocks are going faster than others. He asks why is that?

St. Peter explains, “Every time a living person tells a lie, it speeds his clock.”
This also makes sense, so the guy takes one last look around the room before leaving and notices one clock in the center of the ceiling. On this clock, both hands are spinning at an unbelievable rate. So he asks, “What’s the story with that clock?”

“Oh, that,” St. Peter replies, “That’s OJ Simpson’s clock. We decided to use it as a fan

A Cat Goes to Heaven

A cat dies and goes to Heaven. God meets him at the gate and says, “you have been a good cat all of these years. Anything you desire is yours, all you have to do is ask.” The cats says, “Well, I lived all my life with a poor family on a farm and had to sleep on hardwood floors.”

A few days later, 6 mice are killed in a tragic accident and they go to Heaven. God meets them at the gate with the same offer that He made the cat.

The mice said, “All our lives we’ve had to run. Cats, dogs and even women with brooms have chased us. If we could only have a pair of roller skates, we wouldn’t have to run anymore.”

God says, “Say no more.” And instantly, each mouse is fitted with a beautiful pair of tiny roller skates.

About a week later, God decides to check and see how the cat is doing. The cat is sound asleep on his new pillow. God gently wakes him and asks, “How are you doing? Are you happy here?”

The cat yawns and stretches and says, “Oh, I’ve never been happier in my life. And those Meals on Wheels you’ve been sending over are the best!”

After a long illness, a woman died and arrived at the Gates of Heaven. While she was waiting for Saint Peter to greet her, she peeked through the Gates. She saw that it was so beautiful.

Saint Peter came by; the woman said to him “This is such a wonderful place! How do I get in?”

“You have to spell a word”, Saint Peter told her.

“I’m surprised to see you,” the woman said. “How have you been?” “Oh, I’ve been doing pretty well since you died,” her husband told her. “I married the beautiful young nurse who took care of you while you were ill.

And then I won the lottery. I sold the little house you and I lived in and bought a big mansion. And my wife and I traveled all around the world. We were on vacation and I went water skiing today. I fell, the ski hit my head, and here I am. How do I get in?”

“You have to spell a word”, the woman told him.
“Which word?” her husband asked.
“Czechoslovakia.”

Two guys from Detroit, Michigan die and wake up in hell. The next day, the devil stops to check on them and sees them dressed in parkas, mittens and bomber hats, warming themselves around the fire.

The devil asks them, “What are you doing? Isn’t it hot enough for you?”

The two guys reply, “Well, you know, we’re from Michigan, the land of ice and snow and cold. We’re just happy for a chance to warm up a bit, you know.”

The devil decides that these two aren’t miserable enough and turns up the heat. The next morning, he stops by again and there they are, still dressed in their parkas, mittens and hats.

The devil asks them again, “It’s awfully hot down here, can’t you guys feel that?”

Again, the guys reply, “Well, like we told you yesterday, we’re from Michigan, the land of ice and snow and cold. We’re just happy to warm up a little bit, you know.”

The devil gets a little steamed up and he decides to fix the two guys. He cranks the heat up as high as it will go. The people are wailing and screaming everywhere. He stops by the room with the two guys from Detroit and finds them in light jackets and hats, grilling sausage and drinking beer.

The devil is astonished. “Everyone down here is in abject misery , and you seem to be enjoying yourselves.”

The two Michiganders reply, “Well, ya know, we don’t get too much warm weather up there in Detroit, we’ve just got to have a cookout when the weather is this nice.”

The devil is absolutely furious, he can hardly see straight. Finally, he comes up with an answer. These two love the heat because they have been cold all their lives. He decides to turn all the heat in hell off.

The next morning, the temperature is below zero, icicles are hanging everywhere, the people are shivering so bad, they are unable to wail, moan or gnash their teeth.
The devil smiles and heads for the room with the 2 Michiganders. He finds them back in their parkas, mittens and hats. They are jumping up and down and cheering.

The devil was dumbfounded. “I don’t understand. When I turn the heat up, you’re happy. Now it’s freezing cold, and you’re happy. What is wrong with you two?”

The Michiganders look at the devil in surprise. “Well, don’t ya know – if hell froze over, that must mean. The Lions won the Super Bowl!”

The Pope, Billy Graham, and Oral Roberts were in a three-way plane crash over the Pacific Ocean. They all died and went to heaven together.

“Oh, this is terrible,” exclaims St. Peter. “I know you guys think we summoned you here, but this is just one of those coincidences that happen. Since we weren’t expecting you, your quarters just aren’t ready… We can’t take you in and we can’t send you back….”

Then he got an idea. He picked up the phone, “Lucifer, this is St. Peter. Hey, I got these three guys up here. They’re ours, but we weren’t expecting them, and we gotta fix the place up for ’em. I was hoping you could put them up for a while. It’ll only be a few of days. What d’ya say?”

However, two days later… St. Peter got a call.
“Pete, this is Lucifer. Hey, you gotta come get these guys. This Pope fellow is forgiving everybody, the Graham guy is saving everybody, and that Roberts has raised enough money to buy air conditioning.”

A man arrives at the gates of heaven. St. Peter asks, “Religion?”
The man says, “Methodist.”

Another man arrives at the gates of heaven. “Religion?”
“Baptist.”

The man says, “I can understand there being different rooms for different religions, but why must I be quiet when I pass room 8?”

St. Peter tells him, “Well the Catholics are in room 8, and they think they’re the only ones here.