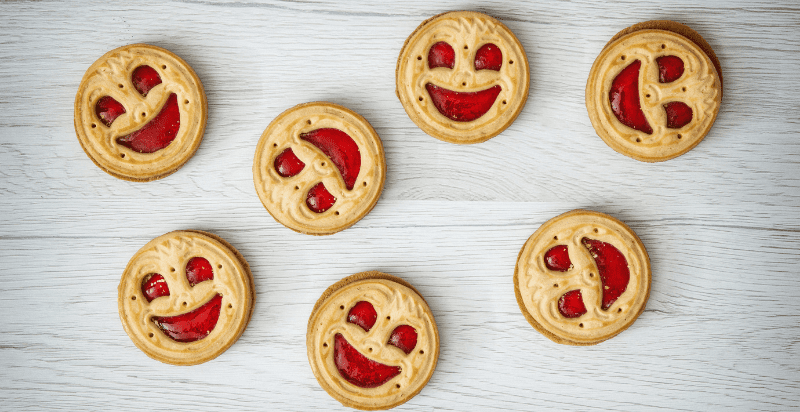 Have to honest with all of you – my two favorite things are eating and laughing with friends. Can you relate? So today we have rounded up the absolutely funniest jokes about food.

In a truck restaurant stop when three Hell’s Angels bikers walked in, they saw an old man eating. The first walked up to the old man, pushed his cigarette into the old man’s pie and then took a seat at the counter.

The third walked up to the old man, turned over the old man’s plate, and then he took a seat at the counter.

Without a word of protest, the old man quietly left the dinner. Shortly thereafter, one of the bikers said to the waitress, “Humph, not much of a man, was he?”

The waitress replied, “Not much of a truck driver either. He just backed his huge truck and really smashed three Harley Davidson motorcycles”

The Elderly Couple and The Food Order

This elderly couple is sitting on a park bench if from of a large pond. Across the other side of the pond are vendors sell all types of food stuff. The wife turns to hubby and say, “I could really go for an ice cream cone.”

Wife says, “But, you’ll forget, you better write it down.”

Wife says, “Get me a Strawberry cone with chocolate sprinkles.”

The wife asks him, “What took you so long, did you get lost.”

The hubby replies, “No, and I got what you wanted.”

The wife opens the bag to discover a cheeseburger and fries?!

Wife says, “I knew you should have written the order down.”

Hubby says, “What do you mean – every thing is there?”

To which the wife replies, “No, it’s not…look, you forgot the pickles!”

Related: The funniest jokes about morons

Once upon a time there lived a woman who had a maddening passion for baked beans. She loved them but unfortunately they had always had a very embarrassing and somewhat lively reaction to her. Then one day she met a guy and fell in love.

When it became apparent that they would marry she thought to herself, “He is such a sweet and gentle man, he would never go for this carrying on. ” So she made the supreme sacrifice and gave up beans.

Some months later her car broke down on the way home from work. Since she lived in the country she called her husband and told him that she would be late because she had to walk home.

On her way she passed a small diner and the odor of the baked beans was more than she could stand. Since she still had miles to walk, she figured that she would walk off any ill effects by the time she reached home. So, she stopped at the diner and before she knew it, she had consumed three large orders of baked beans.

All the way home she putt-putted. And upon arriving home she felt reasonably sure she could control it. Her husband seemed excited to see her and exclaimed delightedly, “Darling, I have a surprise for dinner tonight.”

He then blindfolded her and led her to her chair at the table.

She seated herself and just as he was about to remove the blindfold from his wife, the telephone rang. He made her promise not to touch the blindfold until he returned. He then went to answer the phone.

The baked beans she had consumed were still affecting her and the pressure was becoming almost unbearable, so while her husband was out of the room she seized the opportunity, shifted her weight to one leg and let it go.

It was not only loud, but it smelled like a fertilizer truck running over a skunk in front of pulpwood mill. She took her napkin and fanned the air around her vigorously. Then, she shifted to the other cheek and ripped three more, which reminded her of cooked cabbage.

Keeping her ears tuned to the conversation in the other room, she went on like this for another ten minutes. When the phone farewells signaled the end of her freedom, she fanned the air a few more times with her napkin, placed it on her lap and folded her hands upon it, smiling contentedly to herself.

She was the picture of innocence when her husband  returned, apologizing for taking so long,  he asked her if she peeked, and she assured him that she had not.

At this point, he removed the blindfold, and she was surprised!! There were twelve dinner guests seated around the table to wish her a “Happy Birthday”!!!

Also see the complete guide to the best Thanksgiving Jokes