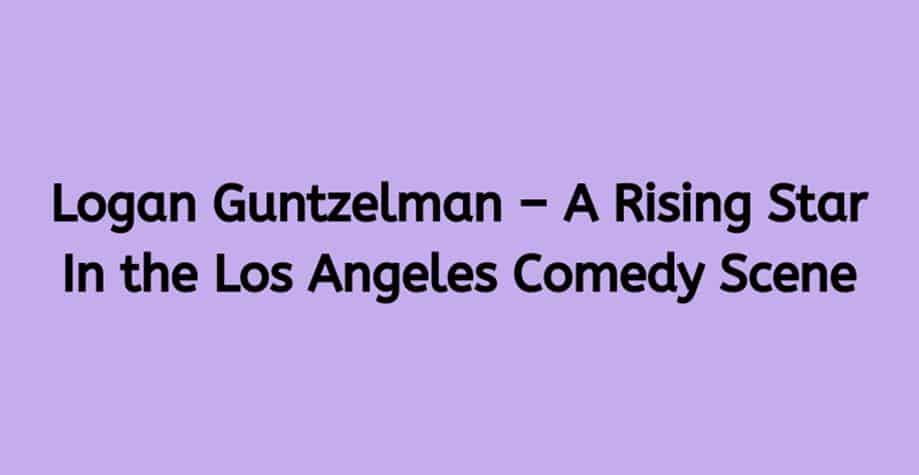 Logan Guntzelman is a Los-Angeles native and has been in California for most of her life. Logan is highly intelligent and pursued a Bachelor’s degree in Psychology from Columbia University.

Even though she could advance further in her academic career and become a professional who could help individuals with serious mental disorders, Logan instead chose to spread smiles and laughter in people’s lives with her comedy.

Anyone who watches Logan perform is bound to admit that laughter is the best medicine for life’s daily worries as she makes jokes about the mundane every day and shares her humorous observations that everyone can relate to.

She started her career after college when she began to perform stand-up comedy at different stand-up clubs in New Jersey, New York, and California. She also performed at venues and festivals such as Ventura Comedy Festival. Hoboken Comedy Festival, Just for Laughs Comedy Festival in Montreal, New York Comedy Festival, Chicago Comedy Expo, and so many more. She is a highly influential comedian who has become increasingly popular on social media, and her fans can instantly recognize her in a TV show, even if it is a minor role.

Aside from being a stand-up comedian, Logan uses her undeniable charm and wit to prank her friends. She is an excellent prankster and has been featured on CBS’ channel for her practical jokes.

Here Are Some Amazing Facts about Logan Guntzelman Only True Fans Know:

1. Logan Guntzelman Has Been Featured in Barry and Other Well-Known TV Shows

Talented comedians and actors are often offered amazing parts in popular TV shows. Owing to her widespread success and popularity on social media, Logan Guntzelman was cast in Barry for a minor role. Her deep voice and hilarious dialogues made her instantly recognizable to fans as they couldn’t stop laughing out loud at her interaction with the other characters. Barry is a show that features the great comedian and SNL star Bill Hader. Bill Hader plays an assassin in the TV show who aspires to become an actor while trying to leave his past life behind.

Logan Guntzelman has also played a small role in Keep the Mystery and 1234: A Study of Romance. She has also appeared in podcasts by the name of Who’s This Now? and The Night Time Show.

Logan Guntzelman is an amazing comedian, and that shows from her performances and stage presence in different comedy clubs. She keeps a stoic face throughout her performances and delivers jokes with the perfect intensity and emotion it requires. She is a careful comedian who toes the line of edgy comedy but never crosses it. This is why her sense of humor and her sarcasm is relatable to all.

Videos of her live performances are often retweeted and posted on YouTube for the online community to follow and enjoy. On the Stand-Up-Shots section, Logan has amassed hundreds of upvotes, which is a huge accomplishment for a relatively new comedian in the scene.

3. She Has Performed at a Number of Comedy Venues

Logan may be a rookie comedian, but she has performed at a variety of comedy clubs and comedy venues. Her online popularity and unique sense of humor have made her stand out among fans of stand-up comedy. She is a highly requested comedian at many festivals and specials.

4. She Has a Genuinely Unique Sense of Humor

Logan Guntzelman has a fantastic sense of humor that is unique from all her peers’. She is not afraid to make fun of herself and likes to make jokes that push the envelope. She is a bold woman who is not shy at all about saying how she feels, which is a big reason why fans love her authenticity. She is also not conscious of appearing silly to others and comfortably shares her homemade videos with her friends of funny antics and jokes.

Logan Guntzelman has a Comedy Central special, which is a sexually explicit comedy show. She is a funny comedian who doesn’t worry about offending others and makes jokes that bring tears to her audience’s eyes. Her comedy special is catered to adults as she makes them laugh with her hilarious anecdotes. In the comedy special, Logan details how she overheard an extremely surprising argument between her boyfriend and his roommates. She also told the audience how she had an amazing revelation about her day job.

Logan Guntzelman has shared with her audiences regarding how much she loves podcasts. She has also been a part of comedic podcasts such as “GETTIN’ BETTER WITH RON FUNCHES,” in which the host, Ron Funches, invites guests to encourage his audience to stay motivated for the future.

In the episode that featured Logan, she and the host talked about her parents meeting at a sitcom and her goals for the near future. In another podcast called “DEVIL’S ADVOCATE WITH ROSEBUD BAKER”, the host, Rosebud Baker and Logan Guntzelman talk about the troubles of having a too deep voice for being sexy and everything that is associated with it.

7. She Was Also Part of the Netflix Is a Joke Fest

Logan Guntzelman was invited to become a part of the Netflix Is a Joke Fest at The Hollywood Improv. She performed a show at the location with Danielle Perez and a few more comedians.

Don’t Tell Comedy produces weekly shows in 45+ cities across the US in unique locations for a one-of-a-kind comedy experience! The location is kept secret until the day of the show, and the performers are a secret until they hit the stage!

Logan Guntzelman is an amazing comedian from Los Angeles who is dedicated to making people laugh with her NSFW jokes. She is a notorious prankster and has even made an appearance on CBS’s local news channel for her practical jokes.

No matter which app you use: Reddit, Instagram, Facebook, or YouTube, you will be able to easily find funny clips from Logan Guntzelman’s set from a comedy club. Her videos have garnered thousands of likes on Facebook and hundreds of upvotes on Reddit, which makes the online community a big fan of Logan.

To read about more famous and talented comedians, click on any of the following links.

Related Articles about Up and Coming Comedians

Get to Know the Hilarious Afghani Comedian Fahim Anwar

Zach Noe Towers – An Fantastic Comedian Through and Through!

Comedian, Podcaster, Actor– There Is Nothing Josh Potter Can’t Do