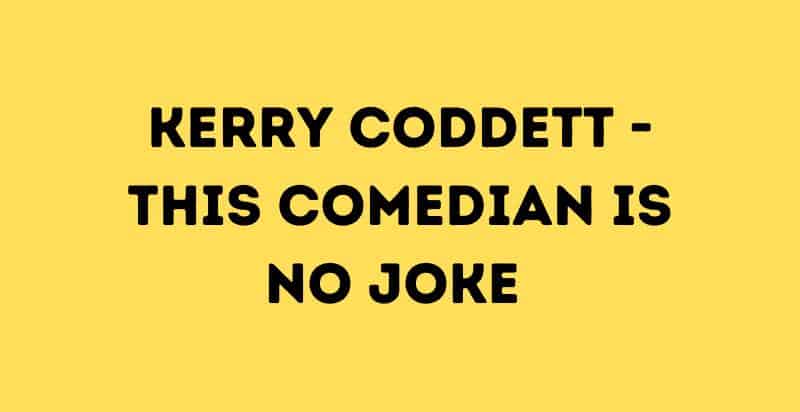 Kerry Coddett is a Brooklyn-based Caribbean-American actress, writer, and stand-up comedian. She is a recurring guest star and staff writer on Showtime’s upcoming drama Flatbush Misdemeanors. This this immensely talented comedian has been labelled “a rising star” and “inimitable.” Let’s take a look at 11 Kerry Coddett facts that you’ve probably never heard before!

1. Kerry Was Invited on The Dreamers Podcast

Hosted by Anne-Lyse Wealth, The Dreamers Podcast narrates the stories of self-mad innovators who put their faith in themselves and aspired to create a prosperous life free of societal expectations. The host of the podcast – Anne-Lyse – invites and interviews people each week about how they realized where their dreams and ambitions lie. The show guests talk about their experiences, as well as their financial gains and losses along their journey to success. Each conversation contains practical and priceless knowledge to aid you in your wealth-building endeavors.

On May 4th, 2021, Kerry Coddett was invited on the show. The two talked about a variety of topics which included the inventive ways Kerry came up with to fund her ambitions. Additionally, they also talked about how having entrepreneurial parents influenced her career.

In the episode, Kerry also shared some priceless gems on networking effectively, regardless of whichever industry or business you’re from, as well as some financial lessons she picked up along the road. She is taking steps to urge the African-American community to pool resources in order to strengthen its economic and political power.

Being an activist, Kerry also goes over the actions she is taking to bring about strength and political power in the Black community by encouraging them to pool together their resources and establish unity.

2. The Comedian Has Also Been on The Reluctant Phoenix

The Reluctant Phoenix is a podcast show hosted by the New York standup comedian Jeff Simmermo. The podcast is a collection of interviews with a wide range of change-makers who have restarted and restructured their lives despite their initial reluctance and hesitation. The show is an excellent source of inspiration for people who feel trapped and want to restart their lives but think it’s too late to do so. The podcast has had a total of 17 episodes with the last one coming out back August 17th, 2021.

Kerry was invited on the 12th episode of the show back in June 22nd, 2021. The host Jeff and Kerry talked about the events that ensued in Kerry’s life from her kindergarten to high school days. The episode was filled with experiences Kerry had with her school friends and teachers.

3. Kerry Almost Got into a Physical Altercation During One of Her Performances

When asked about what her worst ever gig was in an interview, Kerry disclosed that it was at bar in Brooklyn were she was performing her comedy scripts. The comedian stated that she was grilling a heckler, who had been disrupting and bothering Kerry, as hecklers do.

Being offended by her jokes, the heckler went onto the stage to confront Kerry which almost ended up in a physical altercation between the two. The artist went onto say that it took the host and other male performers an abnormally long time to come to her aid.

4. Kerry Defeated 63 Other Comedians in a Comedy Competition

Carolines Comedy Madness is an enticing standup comedy competition hosted and presented by Carolines on Broadway. The competition invites the 64 best standup comedians in New York City to take the stage and gives them the opportunity to give their best shot in a head-to-head against other rising comedians.

The annual five-round tournament stretches over the span of several weeks with half of the total contestants being eliminated each week, i.e. 32 contestants are left after first week, 16 after the second week and so on down to the final four.

5. The Rising Comedy Legend Has Performed at Numerous Comedy Festivals

6. Kerry Coddett Has Been Featured on Ramy

Ramy is a 2019 TV series revolving around the life of a guy named Ramy, a resident of New Jersey and the son of an Egyptian couple who immigrated to the United States. The series follows the story of Ramy as he departs on a spiritual journey and finds himself at crossroads between his Muslim community and heritage, God, and the endless possibilities his friends have concocted for him.

The show debuted in 2019 on Hulu and has put out two successful seasons comprising of a total of 21episodes with the last one being released on May 29th, 2020. Kerry Coddett was featured in the final episode of the show, You Are Naked in Front of Your Sheikh (2020), where she portrayed the role of Leila.

The Iliza Shlesinger Sketch Show is an American comedy TV series that takes us on the tour of a secret and absurd world originating from the mind of Iliza Shlesinger, filled with strange and distinctive figures. The series delivers and effective yet unique take on the experience of being a female accompanied by touching yet irrelevant social commentary.

8. Kerry was a Staff Writer on the Series Wyatt Cenac’s Problem Areas

Being a standup comedian is just the tip of the iceberg when it comes to Kerry Coddett. The talented woman is also a brilliant writer and was landed a gig as the staff writer for the TV series Wyatt Cenac’s Problem Areas – premiered on HBO and produced by John Oliver.

The series takes us on a journey where a comedian by the name of Wyatt Cenac observes and examines the abundance of cultural and social problems that have plagued Americans. The series ran from 2018 to 2019 and had a total of 20 episodes, 19 of which were co-written by Kerry.

9. The Talented Comedian Has Been Featured on a Number of Other Shows

In addition to the names mentioned above, Kerry has appeared on a number of other shows. Her appearances include HBO’s Crashing, E!’s Funny Dance Show, BET’s The Rundown with Robin Thede, and TruTV’s Laff Mobb’s Laff Tracks. Furthermore, she had regular appearances on MTV’s Joking Off and Comedy Central’s The Nightly Show with Larry Wilmore, and she also performed on TruTV’s Comedy Knockout.

10. Kerry Hosts Her Own Podcast

A post shared by That Time of the Month (@thatmonthlyshow)

In 2019, Kerry Coddett launched her own podcast series by the name of On The Chopping Block. The show was missioned to alleviate the shortcomings of the cancel culture and the de-friending trends that have become so prevalent nowadays. According to Kerry, many people get canceled out just for having a different view from the mainstream crowd.

This series hosted by Kerry, invites her hilarious friends – a combination of celebrities, comedians, influencers, and subject experts – on the show where they explore both sides of a controversial positions via a sequence of light exercises to determine whether or not a common ground exists on which everyone can agree upon.

When asked about her thoughts on the word “Comedienne,” the comedian stated that she absolutely despises the word. She goes on to say that there is no need to categorize a profession by gender unless it’s something especially geared or targeted around being a woman.

KERRY CODDETT ON TRUTV. If you’re missing a critical tooth, do not catcall Kerry. She might just make you think she’s a he.

Kerry is an absolute gem of a person. Her lively and energetic personality with a unique delivery style has made her one of the biggest comedy talents of her time. To learn about more talented artists, browse through our vast collection of articles and get blown away by the sheer talent and comedy you’ll find.

Kevin Nealon – One of the funniest comedians ever!