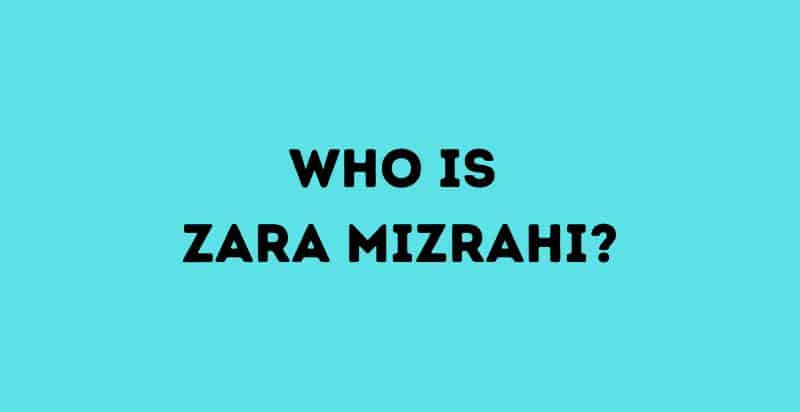 Zara Mizrahi is an actor, voiceover artist, standup comedian, and a screenwriter hailing from Los Angeles, CA. Raised in a bilingual, Mexican, Middle Eastern, and Jewish family by a clothes manufacturing father and a tabloid reporter mother, Zara has a lot to share, which she does brilliantly through her comedy and other avenues. Join us to learn 10 surprising facts about Zara you’ll likely have never heard before.

Zara made her way into the spotlight by performing comedy scripts at various clubs that include The Set Up, Laugh Factory, Westside Comedy Theater, and Ventura Harbor Comedy Club.

The standup comedian has a uniquely hilarious comedy style with her scripts focusing a range of unusual topics such as women objectifying men, being a woman, and technology. Most of her jokes are complemented by her personal experiences which make them all the more relatable for the audience.

2. Zara Mizrahi Has Been on Putting Up With Aron Michael Marsh

Comedy is not the only talent that this rising star has in her arsenal, she’s also an amazing podcast co-host and guest and her extensive portfolio can testify to it. Zara was featured on an episode of Putting Up With Aron Michael Marsh on March 22, 2021. The two friends talked on a variety of topics ranging from coronavirus to Zara’s marriage in the 35-minute episode. They also shared some light jokes on coronavirus.

However, this wasn’t the only time Zara was featured on the Putting Up With Aron Michael Marsh podcast. She was a guest invite on the show on February 18, 2020, as well. The two comedians shared several of their life experiences. They also talked about the world going into lockdown and Zara getting engaged.

3. The Comedian Also Featured on Blockbusting

On December 6, 2021, Zara also appeared on Blockbusting, a podcast hosted by Jay Light focused on criticizing latest Hollywood movies and TV series. The main highlight of the episode was the movie Pig. Jay Light seemed to love the movie while Zara thought otherwise and so the two hosts attempted to justify their opinions of the movie.

4. The Comedian Has Composed Many Scripts

For The Story is another one of Zara’s hilarious scripts based upon the plot of a woman and her daughter teaming up to solve tabloid investigations, the script is set in the 1990s.

Normalized – another one of Zara’s Excellent works – is an animated comedy script. The half-hour script is about a disenchanted actress who begins working for a shady advertising firm to escape from her incidental and undesired stardom. The uniqueness in all of Zara’s work is drawn by the fact that all these scripts have been inspired by her own life’s experiences.

5. Zara was Also a Guest on The Afterlaugh w/ Bill Dawes

On May 31, 2019, Zara appeared on the 48th episode of The Afterlaugh w/ Bill Dawes. In this one-hour podcast, the Zara and actor Bill Dawes talked about how casting directors for TV series and movies can be a bit too extreme. They shared their personal experiences of encountering awkward situations during casting auditions. They also talked about doing voiceovers, writing scripts, and how it was difficult to do everything alone.

The list of Zara’s podcast appearances goes on much longer. Some of other podcasts the comedian has been invited on include Deep Night with Dale (May 6,2021), Discussing Depression (August 26,2020), Below the Belt Show (June 9,2021), and Peace of Chaos: a podcast by Matt Neal (July 2,2021). Needless to say, Zara has garnered quite a bit of recognition in the podcasting community.

The comedic nature with the vocal skills to match have helped Zara land various gigs as a voiceover artist in numerous popular comedic animated series, some of which you’ll surely be familiar with.

Between 2019 and 2020, Zara voiced various characters on the animated series Family Guy. This 1999 comic series follows the story of a dysfunctional family with a talking dog trying to cope with the hurdles of everyday life. The show has garnered immense popularity over the years and putout 20 successful seasons – 384 episodes – till date with many more to follow.

7. The Comedian Has Worked on American Dad

Zara also worked on the American Dad, a 2015 American sitcom revolving around the escapades of Stan Smith. Stan is a cautious CIA agent trying to keep America safe all while dealing with the troubles of family life, doing both in the most preposterous way one can. Zara was featured on 5 episodes between 2019 and 2020 where she voiced various characters. The episodes include Tapped Out (2020), Cheek to Cheek: A Stripper’s Story (2020), 100 Years a Solid Fool (2020), Stompe le Monde (2019), An Irish Goodbye (2019).

8. Zara Has Worked with Marvel on Their Ongoing Animated Series

The rising comedy star is also the voiceover artist behind Carmilla Rappaccini in Marvel’s animated series M.O.D.O.K. She has appeared on a total of 3 episodes that includes Days of Future M.O.D.O.K.s! (2021), What Menace Doth the Mailman Deliver! (2021), and If Saturday Be… for the Boys! (2021).

Zara stated that the show was an inspiration for her to think bigger about her own writing. She adored the way the documentarians depicted the good and bad side of each character in the series which is something most movies and TV series lack.

On being asked about the most questionable thing the artist has seen or heard during an interview, she replied UFOs. She went on to say that these extraterrestrial space crafts are around yet no one is talking about them.

Meet Laugh Factory’s Fresh Face, Zara Mizrahi who’s at the Laugh Factory Hollywood with a look at how women look at men.

Zara’s unique style of comedy coupled with her talent and lively personality have made her a fan favorite of many. While the artist is still relatively new in the industry, we can say with certainty that the future for this upcoming comedy star looks bright and prosperous. Be sure to check out her work if you haven’t already and you’ll surely fall in love with her just like we have!

Other Up-and-Coming Comedians You May Want to Read About:

Get to Know Correy Bell