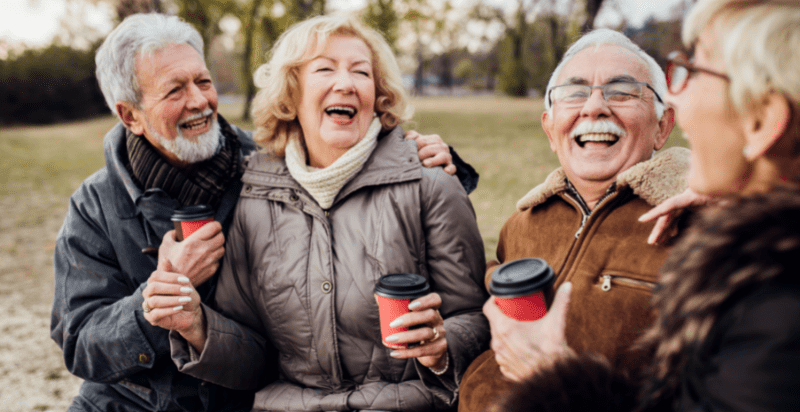 Did you know that laughing is thought to help you live longer? Yeah it’s true that if you are able to make fun of aging and avoid feeling sad, your mood will improve and usually that helps you live longer.

Laughter is truly the best medicine. It can help you get through anything – including aging!

We rounded up our favorites jokes about aging and geriatrics. Enjoy!

Our Favorite Jokes about Old People

A Few One Liners about Old Age

At the Nursing Home a man took his elderly father to a nursing home to check it out. He sat his father down on a sofa in the main aisle way and went to talk with the administrators.

The old man started to tilt slowly toward the left. A Doctor came by and said, “Let me help you.” The Doctor piled several pillows on the left side of the old man so he would stay upright.

The older man started to tilt slowly to the right. An orderly noticed and put several more pillows on his right side to keep him upright.

The old man started to lean forward when a nurse came by and piled several pillows in front of him. About this time, the son returned.

The old man replied, “I guess it’s ok, but they won’t let me fart.”

Old Man and the Young Wife

Young Lad: Sir, are you Okay?

Old Man: Yes, it’s my birthday today (and he is still crying)

Young Lad: Wow, it’s a special day for you.

Young Lad: Even better, you look great for your age.

Old Man: Thank you, and I just got married (and he is still crying.)

Young Lad: Married!! Gee, that’s great! 82 and married, wow! You’ve got a whole new life ahead of you.

Old Man: We have sex every day! (he’s till crying)

Young Lad: I don’t even have sex everyday, you lucky person you.

Old Man: Yes, I am, and I’ve forgotten where I lived.

Three elderly men are talking about their aches, pains and bodily functions. The seventy-year old man says, “I have this problem. I wake up every morning at seven and it takes me twenty minutes to tinkle.”

The eighty-year old man says, “My case is worse. I get up at eight and I sit there and grunt and groan for half an hour before I finally have a BM.”

The ninety-year old says, “At seven I pee like a horse, at eight I flop like a cow.”

“So what’s your problem?” ask the others.

There is this guy who really takes care of his body, he lifts weights and jogs five miles every day. One morning he looks into the mirror and admires his body. he noticed that he is really sun-tanned all over, except his penis, and he decides to do something about it.

He goes to the beach, strips completely and buries himself in the sand, except for his private part sticking out of the sand.

Two little old ladies are strolling along the beach and one looks down and says “There is no justice in this world”.

The other lady says, “What do you mean?”

One night, at the lodge of a hunting club, two new members were being introduced to other members and shown around. The man leading them around said, “See that old man asleep in the chair by the fireplace?

He is our oldest member and can tell you some hunting stories you’ll never forget.” They awakened the old man and asked him to tell them a hunting story.

“Well, I remember back in 1944, we went on a lion hunting exposition in Africa. We were on foot and hunted for three days without seeing a thing. On the fourth day, I was so tired I had to rest my feet. I found a fallen tree, so I laid my gun down, propped my head on the tree, and fell asleep.

I don’t know how long I was asleep when I was awakened by a noise in the bushes. I was reaching for my gun when the biggest lion I ever seen jumped out of the bushes at me like this, ROOOAAAAARRRRRRRRRRRRRR!!!!!!!!!!!……. I tell you, I just pooped my pants.”

The young men looked astonished and one of them said, “I don’t blame you, I would have pooped my pants too if a lion jumped out at me.”

Sally, a difficult independent 75 year old, liked sitting by the park feeding the pigeons. One day she brought with her a whole bun of fresh bread just to feed her daily company. Little by little, pinch-by-pinch, she fed each pigeon with joy. She sat there without being noticed by anyone in our rich suburban neighborhood.

Then suddenly a man in his early 40’s rained on my mom’s parade by telling her that she shouldn’t throw away good food on a bunch of pigeons that can find food anywhere… when there are a lot of people starving in Africa, says the stranger.

Then my mother said in crazed anger and without hesitation, “Well, hell, I can’t throw that far!”

This little old lady calls 911. When the operator answers she yells, “Help, send the police to my house right away. There’s a damn Democrat on my front porch and he’s playing with himself.”

“What?” the operator exclaimed. “I said there is a damn Democrat on my front porch playing with himself and he’s weird; I don’t know him and I’m afraid! Please send the police.” the little old lady repeated.

Well, now, how do you know he’s a Democrat? “Because, you damn fool, if it was a Republican, he’d be screwing somebody!”

An elderly husband and wife noticed that they were beginning to forget many little things around the house. They were afraid that this could be dangerous, as one of them may accidentally forget to turn off the stove and thus cause a fire. So, they decided to go see their physician to get some help.

Their physician told them that many people their age find it useful to write themselves little notes as reminders. The elderly couple thought this sounded wonderful, and left the doctor’s office very pleased with the advice.

When they got home, the wife said, “Dear, will you please go to the kitchen and get me a dish of ice cream? And why don’t you write that down so you won’t forget?” “Nonsense,” said the husband, “I can remember a dish of ice cream!”

“Well,” said the wife, “I’d also like some strawberries on it. You better write that down, because I know you’ll forget.” “Don’t be silly,” replied the husband. “A dish of ice cream and some strawberries. I can remember that!”

“OK, dear, but I’d like you to put some whipped cream on top. Now you’d really better write it down now. You’ll forget,” said the wife. “Come now, my memory’s not all that bad,” said the husband.

He emerged from the kitchen about 15 minutes later. Walking over to his wife, he presented her with a plate of bacon and eggs. The wife took one look at the plate, glanced up at her husband and said, “Hey, where’s the toast?”

Related: The Funniest Jokes about Morons

A Couple Goes to the Doctor’s Office…

A couple age 67, went to the doctor’s office. The doctor asked, “What can I do for you?” The man said, “Doctor, Will you watch us have intercourse?” The Doctor looked puzzled but agreed.

When the couple finished, the Doctor said “There’s nothing wrong with the way you have intercourse.” And he charged them $10.00. This happened for several weeks in a row. The couple would make an appointment, have intercourse, and then leave.

An Old Woman Saves a Fairy

The old lady and the fairy said their goodbyes. After the fairy left, the handsome man strolled over to her and asked, “Now aren’t you sorry you had me neutered?”

Three old ladies are sitting in a diner, chatting about various things. One lady says, “You know, I’m getting really forgetful.

This morning, I was standing at the top of the stairs, and I couldn’t remember whether I had just come up or was about to go down.”

The second lady says, “You think that’s bad? The other day, I was sitting on the edge of my bed, and I couldn’t remember whether I was going to bed or had just woken up!”

The third lady smiles smugly. “Well, my memory’s just as good as it’s always been, knock wood.” She raps the table. With a startled look on her face, she asks, “Who’s there?”

Related: The Funniest “Walks into a Bar…” Jokes

Grandpa Sitting on the Porch

A man was walking down the street when he noticed his grandpa sitting on the porch, in the rocking chair, with nothing on from the waist down. “Grandpa, what are you doing?” he exclaimed.

The old man looked off in the distance and did not answer him. “Grandpa, what are you doing sitting out here with no pants on?” he asked again. The old man slyly looked at him and said, “Well last week I sat out here with no shirt on, and I got a stiff neck. This was your Grandma’s idea!!”

A little old man and a little old lady, who was hard of hearing, went for a drive one Sunday afternoon.

After pulling onto the freeway a policeman pulled them over. “Can I see your drivers license?” asked the policeman to the little old man. “What, what did he say?” said the little old lady. ”