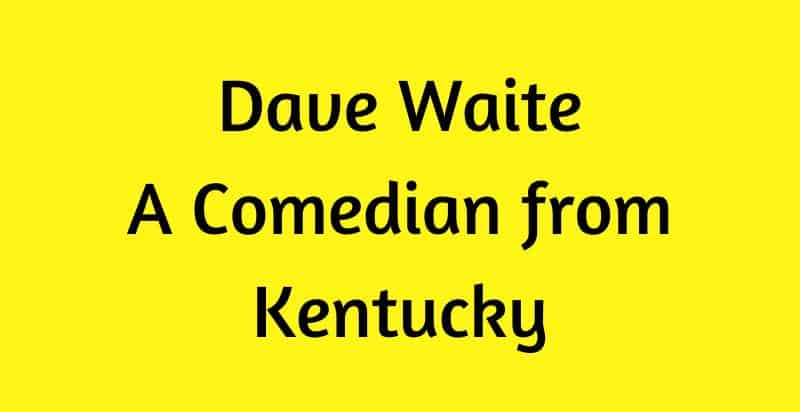 On the surface, Dave Waite seems to be your average nerdy guy. But underneath, there is a whole lot of charm and wit that instantly makes him the center of attention.

Born in Ludlow, Kentucky, Dave Waite is highly popular among his fans, especially for his unique catchphrases.

He has appeared on various late-night and comedy shows, where he gained a lot of fame. We will now take a look at what makes Dave Waite so fascinating.

Dave Waite was the winner of the Laughing Skull Comedy Festival in 2012. He got a roaring applause at the finale of the show.

Dave Waite’s comedy style is quite unique. He often mixes dirty jokes with some politically incorrect humor but always in a hilarious way to put things in perspective. His edgy humor, which contrasts with his relatively innocent appearance, has often brought the house down and made him a fan favorite.

Dave Waite’s comedy often consists of rants and oddball stories. He sometimes uses self-deprecating humor, and his stories of personal failure make him quite popular among the old and young both.

Garrick Bernard — Named as a “Comic To Watch” by Comedy Central

3. Dave Waite Had a Rocky Start in his Comedy Career

Although Dave Waite always keeps smiling, he had to struggle a lot in his post-college life and career. He graduated from Northern Kentucky University with a degree in geography. However, he worked in different jobs and was fired from almost every one of them.

Because of his failed career and love life, he was inspired to take a stand-up comedy class. This is when he found his true calling and was able to quickly amass a fan following. People fell in love with how witty and unpredictable his lines were.

4. Dave Waite Gets His Inspiration from the World Around Him

When asked what inspires his material, Dave Waite mentioned how he observes everything around him. He had at first avoided using political jokes, but he felt he could just bring laughter and joy in people’s lives. He felt there was so much hatred and ignorance in the world that he wanted to do what it takes to counter it. This is why he often gets on the risky side of political correctness.

Dave Waite has released a total of four albums. His latest one is called “Dead Waite.” It consists of some of his most popular comic performances and was a highly anticipated one before its release. It is available on Amazon and iTunes. His other albums can be listened to on Pandora and SiriusXM.

6. Dave Waite Has Appeared on Late Night with Jimmy Fallon

Dave Waite had a guest appearance in the famous “Late Night with Jimmy Fallon” show. This was when he got his first mainstream popularity. In his appearance, he shares his perspective on various topics like geography, owning snakes, and time traveling. His comedy routine was particularly lauded by the audience in the show.

7. Dave Waite Had Many Celebrities Appear on His Show

Dave Waite and Nick Anthony collaborated together to produce “The Secret Show” in Los Angeles. It received a lot of acclaim from the viewers. Comedy legend Dave Chappelle has also done a few performances on this show. Many celebrities, like Bradley Cooper and Jonah Hill, had guest appearances too. All this made his show quite popular among the audience.

Here is a video of Dave Waite doing one of his hilarious comedy performances.

Dave Waite is well on his way to making a huge name for himself in the world of comedy. His wit and humor have been widely acknowledged by critics and comedians alike. His talent is sure to take him places and make him a household name soon!