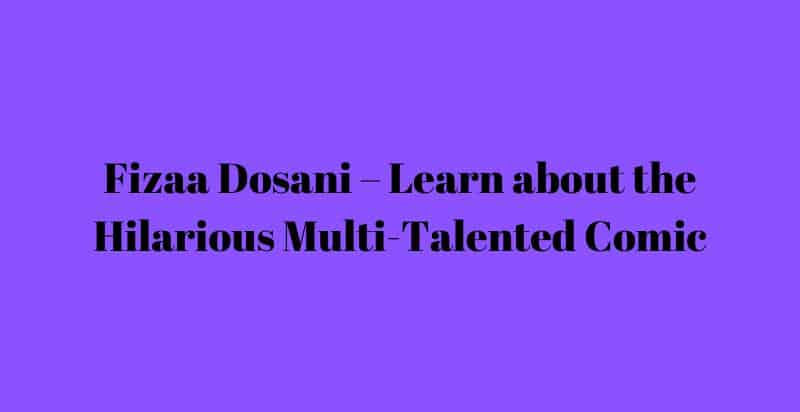 Fizaa Dosani is an Indian American stand-up comedian who is known for her eccentric and uniquely fresh sense of humor. She has performed as a comedian on stages all over the world and is known for her exceptional performances on well-known stages. Fizaa is also a talented actress on screen and has performed brilliantly in various popular TV shows. Fizaa has been featured in the famous Netflix show Dear White People, FX’s show Snowfall that can be watched on Hulu, and even the cult classic by ABC called How to Get Away with Murder. Fizaa would also be playing as Seema in Fox’s new show called Pivoting, which will be featured as a new comedy series for premiere in 2022.

Fizaa has been recognized by the New York Times in an article and has been the up-and-coming face of modern comedy. If you want to learn more about the multitalented rising star, keep on reading the following facts about Fizaa Dosani.

Fizaa Dosani is the proud owner and creator of Facial Recognition Comedy. Facial Recognition Comedy is a comedy brand that includes stand-up comedy tours, a hilarious podcast, and social audio series featuring Fizaa Dosani and some other hilarious South Asian women like Zahra Ali and Pallavi Gunalan. The audio shows and the podcast mainly feature topics that affect the South Asian minorities with women being the center point of it. The show was also praised by the New York Times as one of the top five shows to see in the New York Comedy Festival in 2018.

The podcast of the name Facial Recognition Comedy is co-hosted by Fizaa and has also been featured in Vulture, Screen Rant, Backstage, Deadline, and Daily Beast.

3. Fizaa is an upcoming rising star in comedy who has been earning wide recognition

Fizaa Dosani is a rising star in the comedic industry who has been recognized far and wide for her achievements. She has performed on well-known stages around the world and has a brilliant sense of humor that can entertain all kinds of audiences.

Fizaa’s comedy brand called Facial Recognition Comedy focuses on creating a space for the under-represented minorities in the stand-up industry. Fizaa was recognized by The New York Times as an up-and-coming comedian and actress. Fizaa has performed with the Facial Recognition Comedy (FRC) for three years in a row and has gained the attention of Deadline, Vulture, Screen Rant, and even the Daily Beast.

4. Fizaa is the winner of Clubhouse’s inaugural Creator First program for her comedy show

Fizaa Dosani was selected as the app Clubhouse’s inaugural Creator First program in the lockdown period in 2021. The app encouraged her to co-produce as well as co-host the pilot of the show and order twelve episodes of the Facial Recognition Comedy Club. This recognition of Fizaa’s show allowed the Facial Recognition Comedy to create the first and one-of-a-kind social audio series on the social media platform.

5. Fizaa has performed on some of the most famous stages in Los Angeles and New York City

Fizaa Dosani’s comedy group called the Facial Recognition Comedy is a nationally touring comedy show which has residencies in both Los Angeles and New York City. Tickets to Fizaa’s shows can be bought for New York and Los Angeles as the comedian often splits her time on the East and West coast of America. Fizaa Dosani has been featured at the Laugh Factory, Mi’s Westside Comedy Theater, and the New York Comedy Club.

Fizaa comes from an Indian household and has had a traditional upbringing, allowing her to develop a duality in her personality of her American as well as her Indian side. Fizaa has made jokes about how white people have adopted the word “namaste” with the wrong pronunciation. She has also made jokes about her representation on the internet and how people perceive her looks. Fizaa has also poked fun at white privilege by making jokes about white power in her comedy routines.

7. Fizaa made a dating profile for her mom on Grindr as a joke

Fizaa comes from an Indian background and has had a traditional Indian upbringing. On an Instagram post where Fizaa can be seen wearing a traditional Indian saree, she told her followers that her mother put up a picture of her and her profile on an Indian matrimonial website to look for potential suitors. In an effort to get revenge for doing that, Fizaa jokes that she made a profile for her mother on the dating app Grindr.

8. Fizaa is a strong advocate for women in comedy

Fizaa has also spoken about women being constantly compared to one another on the basis of their appearance and being pitted against one another to bring one down. This is an unethical practice and Fizaa tells her audiences that it is possible for someone to be great without the other person being absolutely trash.

Which social media platforms is Fizaa active on?

Is Fizaa Dosani an actress?

Yes, Fizaa has been featured in a number of popular shows. Fizaa Dosani is a talented young woman who has played a variety of roles in various famous TV shows. She has been a part of acclaimed movies and has been featured in shows such as Netflix’s Dear White People, ABC’s stellar show How to Get Away with Murder, and FX’s Snowfall that can be watched on Hulu.

Fizaa Dosani also has a role as “Jules” in season five of S.W.A.T. airing on CBS. She will also be featured in the first season of FOX’s Pivoting, a new comedy series which will premiere in 2022 on the channel, as “Seema”.

Does Fizaa support other minorities?

Yes, Fizaa has been a great supporter of the Black Lives Matter Movement. She was active in the protests for justice for Breonna Taylor and Sandra Bland as she posted a heartfelt message of support and encouragement for the movement.

In the message she discusses the marginalization of Black Women, transgender or cisgender, and their contribution to the country and to the development of the people. Black Women have continued to persist and grow even in the face of perpetual mistreatment and neglect from all sectors of the society.

Fizaa went on to elaborate how Black women have contributed to making the social space welcoming and inclusive for all, especially for an ambiguous woman of color like herself who needed support in a system that does not facilitate minority groups. Fizaa showed utter respect for Black women and gave thanks for their support, love, sisterhood, and role-modeling.

Is Fizaa Dosani related to someone from Bollywood?

Fizaa Dosani is also a distant relative of the Bollywood superstar Mithun Chakraborthy who is also related to Abrar Alvi.

Stand up comedian Fizaa Dosani calls out a couple for finding love in a hopeless place: dating apps. If you enjoyed this, please click thumbs up, add this video to your favorites, or share with a buddy. What do you think? Comment below! Thanks for watching– your support is appreciated!

Fizaa Dosani is an Indian American comedian and actress who has been featured in a number of popular TV shows for her excellent performances. Fizaa is also the creator and founder of Facial Recognition Comedy, a comedy brand that focuses on uplifting South Asian and female comedians in the industry. Recognized by the New York Times as a rising star, Fizaa Dosani is a comic to watch out for. For more information about the talented comedian, visit her Instagram or her Twitter page.

Humor Has It: Rhea Butcher