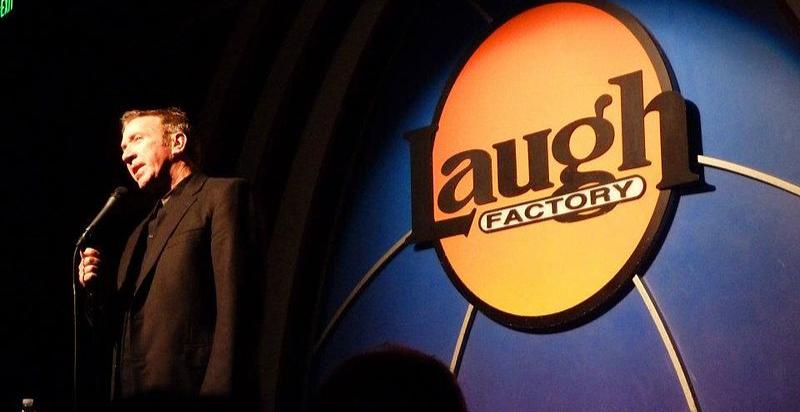 Tim Allen is a famous American comedian and actor who has played notable roles on shows such as Home Improvement, Last Man Standing, Santa Clause, Tropical Snow, Wild Hogs, Crazy on the Outside, El Camino Christmas, and Joe Somebody. Tim Allen also plays Buzz Lightyear in the movie franchise “Toy Story,” which helped him earn worldwide acclaim for his talents.

He has also won many awards for his acting, comedic performances, and voice acting talents. Aside from his talents in showbiz, Tim Allen has also written two popular books called I’m Not Really Here and Don’t Stand Too Close to a Naked Man. The books focus on the philosophical questions of life with Tim Allen’s witty sense of humor.

He began his career in showbiz with comedy as he appeared in local commercials and cable comedy shows. Eventually, he advanced in his career and was offered a role that would be life-changing for Tim Allen, the role of Tim Taylor on Home Improvement.

After the show ended in 1999, he starred in multiple films and voice-acted for various animated films before working on Last Man Standing, a fun sitcom featuring Tim Allen as a conservative father in a home full of women.

1. “Men are liars. We’ll lie about lying if we have to. I’m an algebra liar. I figure two good lies make a positive.” ― Tim Allen

2. “The greatest missile in the world is useless…unless it’s targeted. A torpedo is adrift unless it has someplace to go. An arrow is pointless unless it hits something. So, it’s important for kids—for everyone, even if you fail at first—to target something and head in that direction. With all your might.” ― Tim Allen, Don’t Stand Too Close to a Naked Man

3. “Anyway, they used to beat up on Barry all the time. They called it roughhousing, which is like men calling lying bullshitting.” ― Tim Allen

4. “It’s sad knowing that after something happens, every option to change the past is gone.” ― Tim Allen, I’m Not Really Here

5. “Convictions and Beliefs! What do they have to do with religion!” ― Tim Allen

6. “While awaiting sentencing, I decided to give stand-up comedy a shot. The judge had suggested I get my act together, and I took him seriously.” ― Tim Allen

7. “Sometimes you get the sense that the Creator is getting to that point of ‘Yeah, we might have to reboot’.” ― Tim Allen 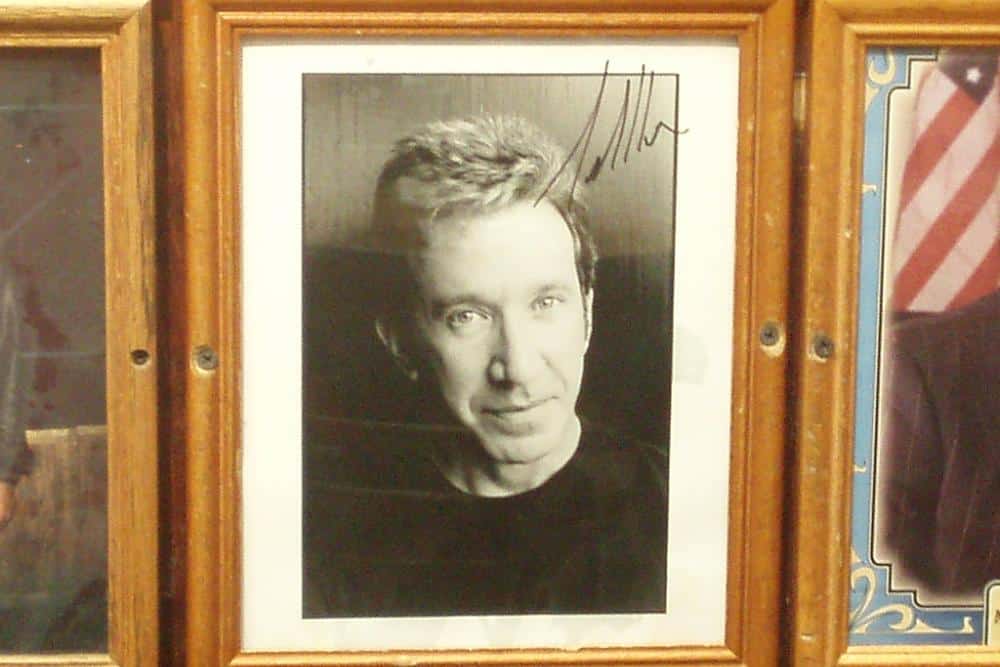 8. “When you’re 6 or 7, your father becomes this wonderful presence in your life. I really responded to my father. And then, the very moment I realized that I loved him unconditionally, that life was going to be great just because he was in it, he was gone.” ― Tim Allen

9. “The most important thing I’ve discovered is that I love her best when I’m not scared of her, when I’m not worrying myself crazy because she’s a girl and I’m a boy, and I don’t understand all there is to understand about her, or because I’m afraid I haven’t been a good enough [dad]. Fear gets in the way of love, and I’ve discovered that fear, and not hate, is the opposite of love.” ― Tim Allen, I’m Not Really Here

10. “Women are like cars: we all want a Ferrari, sometimes want a pickup truck, and end up with a station wagon.” ― Tim Allen

11. “You don’t know what people are really like until they’re under a lot of stress.” ― Tim Allen

12. “My mom said the only reason men are alive is for lawn care and vehicle maintenance.” ― Tim Allen

15. “I think women like Ferrari. A Ferrari is everybody’s car.” ― Tim Allen

17. “I have irrational fears, and they all go back to losing my father as a kid. I’ve never gotten over it.” ― Tim Allen

18. “When someone tells you they’re not very smart, they’re saying exactly the opposite.” ― Tim Allen

20. “I have to get a license to drive a motorcycle to protect myself and the people around me. I am adamant there should be some sort of licensing required to have children.” ― Tim Allen

21. “In my experience, it’s all wonderful with girls until about 16. Around that time, boys kind of calm down and start focusing on their testosterone. Girls get a little challenging, especially for fathers.” ― Tim Allen

22. “I like Pixie Sticks. Yeah, screw the middleman. Just a tube of sugar… I’d pour two of those in a big 12-ounce coke. And I’d go out to catechism class and try to concentrate on the priest. I saw Jesus several times. I swear I did.” ― Tim Allen

23. “I was gone so much in my first marriage. I love the moments when I engage with my youngest daughter now. It’s not my thing to sit on the ground and play tea party, but I’ll do it because it’s a moment that will stick with me forever.” ― Tim Allen

24. “My wife loves cars, but the difference is she doesn’t have 20 years of understanding the background of them. She basically drives them and uses her gut feelings as to which is best.” ― Tim Allen 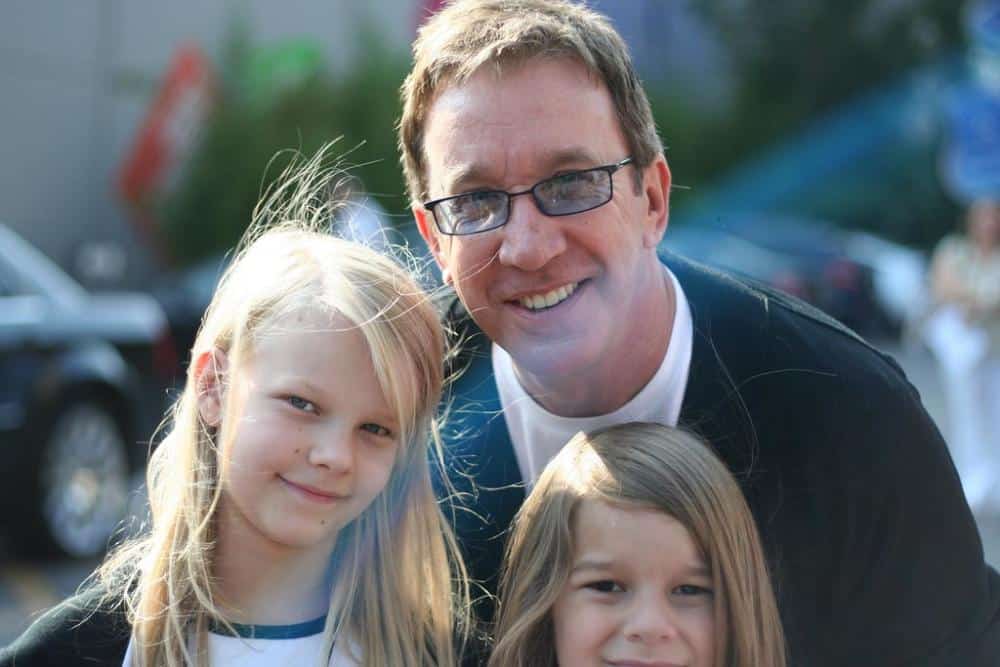 25. “Never comment on a woman’s rear end. Never use the words’ large’ or ‘size’ with ‘rear end.’ Never. Avoid the area altogether. Trust me.” ― Tim Allen

27. “The big advantage to playing the Venetian in Las Vegas – where it’s a beautiful theater – is that, unlike other places, even many other nice venues, I can do a set and lighting cues, I can put on a real show. I can dress up, wear a tux.” ― Tim Allen

28. “I don’t understand why it has to be either – or – either socialism or democracy. Why can’t we combine things to get the best of each system?” ― Tim Allen

30. “Dad needs to show an incredible amount of respect and humor and friendship toward his mate, so the kids understand their parents are sexy, they’re fun, they do things together, they’re best friends. Kids learn by example. If I respect Mom, they’re going to respect Mom.” ― Tim Allen

33. “Nothing’s as easy as it is on a sitcom. Issues that we take care of in 20 minutes on the show can stretch out over the years in real families.” ― Tim Allen

34. “Electricity can be dangerous. My nephew tried to stick a penny into a plug. Whoever said a penny doesn’t go far didn’t see him shoot across that floor. I told him he was grounded.” ― Tim Allen

35. “A guy knows he’s in love when he loses interest in his car for a couple of days.” ― Tim Allen

37. “Jill, we became parents so we could tell our kids what to do. Otherwise, we’re just the tallest people living here.” ― Tim Allen 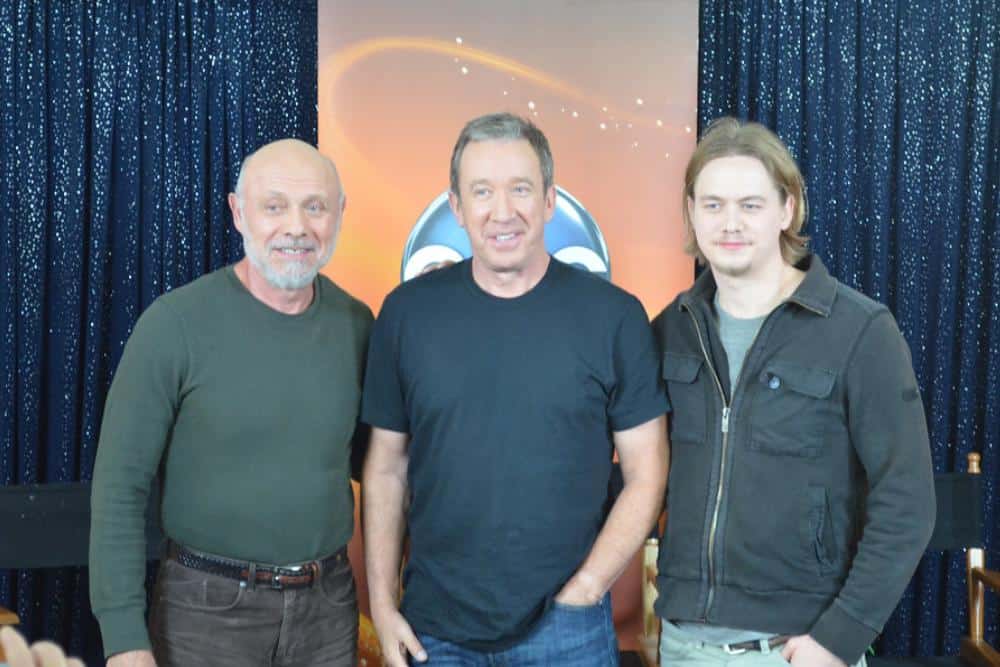 38. “Can we take a direct flight back to reality, or do we have to change planes in Denver?” ― Tim Allen

39. “They say you only go around once, but with a muscle car, you can go around two or three times.” ― Tim Allen

40. “Why go to a church to worship God? A church is man-made. God never said, “And let there be aluminum siding.” Climbing a tree to talk to God sounds like a better idea since only God can make a tree. And if that tree’s on a golf course, all the better.” ― Tim Allen

42. “Speeding is like drugs. It makes everything come at you fast, and when you go back to normal driving, safe driving, prudent driving, it seems boring. That’s the danger of drugs. At first, it’s intoxicating, but then the rest of your life, you’re trying to find that very first time. It never is the same.” ― Tim Allen

Watch Tom Hanks and Tim Allen take friendship to infinity and beyond!

Tim Allen is a famous TV personality and voice acting star who has appeared in many award-winning shows and movies. He is a talented individual who took his start in showbiz with his amazing comedy skills. As Allen began gaining more popularity as a comedian, he took over other acting roles, making him a well-known American icon in the 1990s and early 2000s. He has also published two very well-received books: Don’t Stand Too Close to a Naked Man and I’m Not Really Here.

“Tim Allen on the wall of the Carnegie Deli” by Eddie~S is licensed under CC BY 2.0.