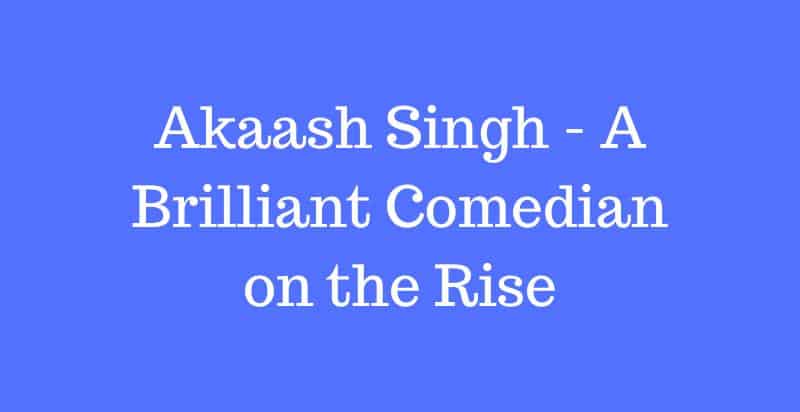 Akaash Singh is a talented comedian with Indian roots. Born and raised in Texas, he has rapidly made a name for himself in stand-up comedy. Akaash has been on several national tours and is well on his way to becoming a household name. Most of his humor focuses on the differences between culture and upbringing.

Akaash has a unique style of comedy where he is able to relate to almost everyone from whichever background they come from. Let’s look at the success of Akaash Singh and how he deserves every inch of it, and a lot more.

1. Akaash Singh Got His Inspiration to Do Comedy in College

Akaash was studying pre-medical in college when he was told by most people that he would become an excellent stand-up comedian. He wasn’t entirely convinced of pursuing this as a career until his best friend really motivated him to do so.

Akaash and his friendwent to a comedy open mic near his place, where Akaash gave his first shot. While he thinks he wasn’t great, the audience themselves had responded quite well. This is where he began to seriously consider stand-up as a career option.

2. Akaash Singh Had a Rough Start in Life

Much of Akaash’s humor comes from the struggles of being an Indian-American. He had to struggle a lot in his life after he graduated from college. At one point, he was collecting unemployment checks to follow his dream of being a stand-up comedian full time.

Because of such fluctuating income, it was a long while before he began to secure himself financially. But thankfully, his dedication to his goal and commitment is paying off. His comedy always manages to bring out a roaring bout of laughter when describing his experiences growing up as a second-generation American.

3. Akaash Singh Has Released His First Special “Bring Back Apu”

The popularity of Akaash Singh was already increasing rapidly when it saw another explosive boom with the release of his very first special, “Bring Back Apu.” It was released on YouTube, where it has already garnered more than a million views since its recent release.

People have been positively vocal in their appreciation for his special. Akaash talks about a variety of topics, including some present-day issues, immigration culture, current events, and politics, with a side-splitting twist in all of them. His consistent edginess made him quite distinct from other mainstream comedians.

4. Akaash Singh Is Most Famous for His Podcast Flagrant 2

Akaash Singh’s podcast “Flagrant 2” is a project of him and his good friend Andrew Schulz, who is a renowned comedian. Initially, the podcast was about sports (Akaash loves football and basketball).

The podcast developed more to include discussions about popular culture and current events. Their podcast became hugely popular during the Covid-19 pandemic when the whole world was in lockdown. Akaash and Andrew’s humor was quite spot-on and full of insights and information.

As of now, both of the comedians release two episodes of their podcast every week through various public channels.

Along with his podcast with Andrew Schulz, Akaash has another podcast called “American Desis.” This is co-hosted by actor Arjun Gupta and has a central theme of South Asian culture. The podcast is all about the cultural differences of South Asia and the West.

Both Akaash and Arjun invite guests who have a South Asian background to interview them. These guests can be young South Asian professionals who are in new fields to the veteran, more traditional ones who actually made the way for their future generations.

6. Akaash Singh Wants to Preserve and Highlight His Indian Roots Through Comedy

Akaash  Singh has often talked about how much he wants to leave a positive mark behind him. Coming from an Indian background and having lived life with a lot of difficulties, Akaash remains humble throughout.

With his comedy, he aims to inspire other people, especially Indian kids who watch TV. Akaash himself is a celebrated figure in India, and he wants to make sure he doesn’t lose his identity.

Comedian Ian Bagg Shares the Inspiration Behind His Jokes

Here is a video of Akaash Singh’s first special Bring Back Apu.

Akaash Singh deserves every bit of recognition he has gotten and a lot more. He is a testament to how comedy can be used to bring a smile on people’s faces especially in dark times.

His own life is a lesson in perseverance, commitment and patience, which is truly inspiring.