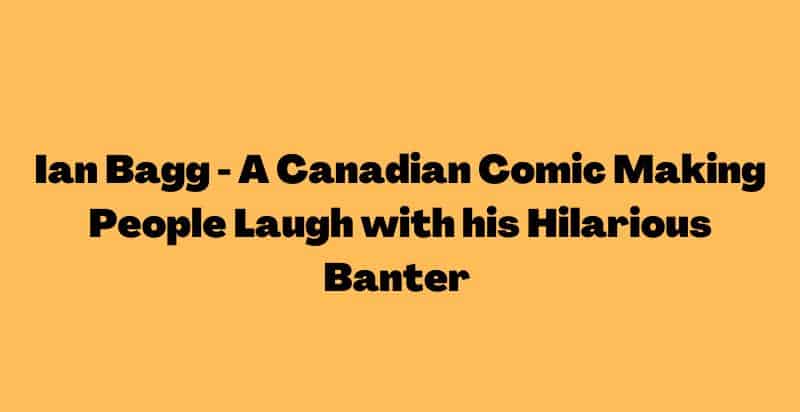 Canadians often have the stereotype of being too nice associated with them. However, Ian Bagg is a Canadian comedian that will prove these stereotypes as utterly false as he banters with the crowd and makes them laugh by roasting a member of the audience!

Ian is an exceptional comic who rose to popularity once he joined the Last Comic Standing show in 2015. He was born in Terrace, British Columbia before he moved to New York City in 1996.

Ian is a multi-talented artist who used to be a part of the local Grand Theatre in Washougal, Washington, before becoming a stand-up comedian. Nowadays, he spends his time in California as he lives near Long Beach.

Here Are Some of the Most Fascinating Facts about Ian Bagg

1. Ian Bagg was featured in multiple live shows on TV

Ian started his career as a comedian in New York City when he was living in a youth hostel. He had moved from Canada and was looking for a fun opportunity to show off his talents.

His skills and humor allowed him to get started in comedy with massive success as he soon moved from doing stand-up comedy in comedy clubs to performing sets on “The Late Late Show with Craig Ferguson”, “Late Night with Conan O’Brien”, as well as the “Tonight Show with Jay Leno.”

He was also a part of many other comedy TV shows such as “Showcase Comics with Louie Anderson,”, “Fridays” on NBC, “Make Me Laugh,” as well as the “Late Late Show with Craig Kilborn.”

Although he made many TV appearances in known comedy shows and late-night shows, Ian’s passion for a live audience and stage never faltered, and he continued to perform stand-up comedy all over the country.

He has also been featured on many diverse TV platforms such as the Food Network, the Biography Channel, and the History Channel. His ability to interact with all ages of people and make them laugh is what makes him popular among his fans to this day.

Joe Sib Is A Rebel With A Cause

After Ian Bagg started gaining fame in the U.S.A. for his talents and humor, executives noticed him and invited him to perform a one-hour comedy special on Showtime in April 2013. His humor and playfulness won the audience’s hearts, and he was invited to perform two more half-hour specials on Comedy Central and HBO.

He was featured in “Comedy Central Presents” and HBO’s “A Comics Climb”. Aside from that, Ian Bagg was also featured in “Gabriel Iglesias Presents Stand-up Revolution” as well.

He also has a show called “Conversations” available on Amazon, Google Play, and iTunes, which audiences can listen to whenever they like. Ian was also a part of NBC’s famous show for stand-up comedy called “Last Comic Standing”. He finished in the top five and was offered the chance to perform a national tour.

3. There is a funny story about Ian Bagg getting into comedy

As a comedian, Ian  likes to push the envelope and discover how he can entertain his audiences in the most absurd ways. All of that can be attributed to how he found his love for comedy and making people laugh in the first place.

Growing up, he discovered he had a great love for hockey. No matter which kind of hockey it was, Ian loved junior hockey, pro hockey, and playing the sport with his friends just for fun. To help improve his game, Ian Bagg joined hockey camps as well.

However, it soon became clear to him that he had no chance to make it into the real thing. Nevertheless, Ian was determined to have fun and discovered along the way that the most enjoyable thing for him was making players laugh in the locker room, bus, or bench.

This was the first time Ian Bagg realized that he could actually entertain people with his energetic, fun, wild, and joyful personality.

It was after this incident that Ian Bagg began his journey of using his talents for comedy and pushing the boundary on what it meant to be an entertainer.

4. Ian Bagg also has a few hilarious series on YouTube

Ian is active on YouTube since he regularly posts funny podcasts and conversations with friends and other comedians. He hosts a weekly podcast called “Ian Bagg bought a house” and a podcast called “Around the Bagg.”

And he hasn’t forgotten about his love for hockey as he has gotten older since he regularly uploads updates regarding the NHL and his insights in the podcast series “Enjoying Orange Slices” on YouTube.

Lately, Ian has also begun to post short reels on YouTube. These short clips feature his jokes from his stand-up shows as he makes audiences laugh with funny anecdotes or banter with the audience for fun.

5. Ian Bagg combines his love for hockey with comedy

Ian is a comedian, and his love for hockey runs through his blood. As a young child, Ian wanted to become a professional player and even joined a hockey camp for this purpose. However, he soon discovered playing with other kids his age that he would be unable to make it big. Nevertheless, he didn’t let this fact discourage him but made the players laugh at his hilarious jokes.

When he grew up to become a renowned comedian, Ian Bagg brought together hockey and comedy together with collaborative shows with the NHL Alumni. He joined forces with the organization and performed stand-up shows for various hockey teams such as the Toronto Maple Leafs, Detroit Red Wings, and St. Louis Blues.

Where was Ian Bagg born?

He was born in Terrace, British Columbia.

Yes, he has a website that is: https://ianbagg.com/. You can find all details regarding his latest shows, podcasts, and events on his website. You can also subscribe to email alerts where you will be notified with an email regarding where Ian Bagg is performing near you.

Does Ian Bagg have any social media accounts?

Yes, he uses Instagram and even has a public Facebook page where he regularly posts updates regarding his shows.

Ian Bagg is a one-of-a-kind comedian who originates from British Columbia in Canada. Nevertheless, no one should be fooled by the stereotype of Canadians being too nice since Ian is bound to prove you wrong.

He is an energetic and witty comic who banters with his audience and often roasts them savagely on stage.

His most notable appearance on television has to be in the ninth season of NBC’s highly famous show “Last Comic Standing” in 2015. He was also a part of “Jimmy Kimmel’s Comedy Club show” in Las Vegas until it was closed temporarily due to the coronavirus pandemic.

Alyssa Limperis and Her Comedy Career

How Should You Dress for a Comedy Club?