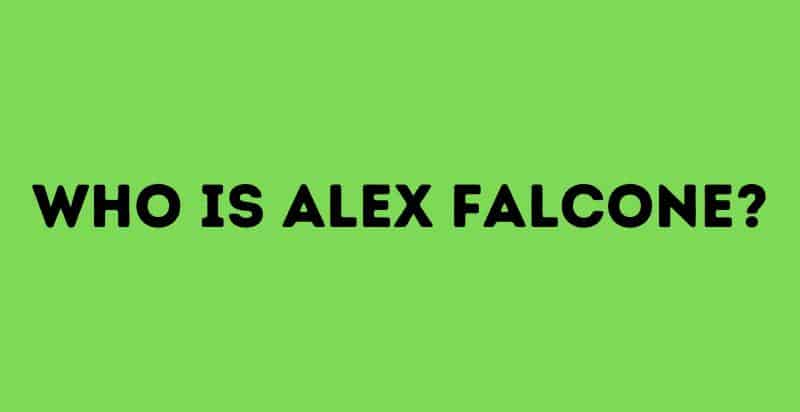 Alex Falcone is one of the many talented comedians and writers living in Los Angeles. Known for his witty and dry humor, Alex Falcone became a fan favorite for his live performances, which featured his experiences growing up, jokes about his observations in real life, and current trends. Aside from pursuing stand-up comedy,

Alex Falcone is co-author of the popular book Unwrap My Heart, which is a hilarious parody of a very famous young-adult novel. Alex has also won Portland’s Funniest Person in 2018, which made him rise in popularity across the US. He has appeared on several episodes of the show Portlandia on IFC. It was in 2021 that Alex Falcone made his late-night TV debut on The Late Show with Stephen Colbert, where he performed stand-up comedy in front of live and TV audiences.

1. Alex is the host of a hilarious podcast

Alex Falcone is the host of a popular podcast, Read it and Weep, which started long ago as a book club with his co-hosts to discuss famous fiction books. Alex and his co-hosts read many bad books and watched terrible movies and TV shows for content for their podcasts before deciding to review good shows they actually liked.

Read it and Weep is a show that features the opinions of Alex Falcone, his guests, and his co-hosts, Anthony Lopez and Hunter Donaldson. The second season of the show featured Alex reviewing his experience about watching movies that he actually liked for his audience. However, it made him realize that he did not know much about movies. Alex called two of his friends, who are knowledgeable about film and movies, to help him out and teach him in a season that was called Slightly Condescending Film School, which was loved by audiences.

The ongoing fourth season is called Perfect Opinions, where Alex talks about movies and media topics and shares his opinions about the movie and how his audience should feel about it.

Alex Falcone is an avid Instagram user and uses the platform to spread laughter among his audiences. He posts hilarious tweets to engage his followers and funny stand-up videos about silly and funny moments from his life.

Alex has posted about how he is not much of a hugger, and he hates people who label themselves as so to be friendly and sweet – Alex believes it should not be acceptable for acquaintances to hug just by giving the excuse that they like hugging. Alex also posts funny and cute moments he shares with his wife in their life on the platform. He showed how when he and his wife couldn’t decide what to put in a cabinet, they built a Lego replica of their home in the cupboard as a funny inside joke.

3. Alex was featured on The Late Show with Stephen Colbert

Alex Falcone is a talented comedian whose talents were recognized by Stephen Colbert and his team when he was invited to perform on the show. He performed on the show and talked about all the sweet things about his wife, which was completely opposite of what happened in the late-night TV shows of the 1990s and 1980s. Alex believed it would be an injustice for him to do that and indigenous to say bad things about his wife because he believes her to be the coolest and sweetest person ever. Therefore, he flipped around the set and only said nice things about his wife and thought the network to be supportive for letting him take a risk with a wildly different stand-up routine that focused on his healthy and fulfilling relationship.

4. Alex has released a comedy album

Alex Falcone shared that he loves comedy albums and had always dreamt of creating his own one day. He said that although comedy albums are not that popular anymore and have become a thing of the past, there is still a market for comedy albums for truckers who want something to listen to without falling asleep on the road. For his debut comedy album, Alex Falcone recorded all the best jokes that he had written over the past ten years so that he could entertain truck drivers.

Alex Falcone has been doing comedy for a long time and has been featured in many stand-up locations, including the Helium Comedy Club in Portland. Alex has performed at a variety of comedy festivals, some of which include Sketchfest, the Brooklyn Comedy Festival, the Pittsburgh Comedy Festival, Bumbershoot, and Bridgetown. Alex has not only performed in Los Angeles or Portland but has traveled all over the country to entertain audiences from far and wide.

6. Alex is a great writer whose writing has been quoted in multiple publications

Alex is a fantastic comedy writer whose work has been featured in the Portland Mercury and The Willamette Week. He has also written for Live Wire! Radio and his words have been featured in Rolling Stone, Boing Boing, VOX, and even the front page of Reddit.

7. Alex is the first comedian to have an ice cream named after him

Alex Falcone is very proud of the fact that he is the first comedian to have an ice cream named after him. The famous Portland Salt & Straw approached Falcone and, with his permission, made a flavor of ice cream called Chocolate and Falcognac. The company released the delicious flavor in 2016, and Alex can often be seen holding an ice-cream cone in his pictures in honor of that.

The funniest thing Alex Falcone has ever done is to write a parody of the famous young-adult book “Twilight.” Similar to Bella and Edward Cullen’s tale of romance, Alex Falcone’s book “Unwrap my Heart” is about a girl who falls in love with a mummy. The book features Sofia as the main character, who is portrayed to be just an ordinary girl with worries about school and homework when she gets intrigued by a mysteriously handsome boy with bandages and empty gaping holes instead of his eyes.

Alex thought it would be fun to make a parody of the concept where a clueless young girl falls in love with a monster or a mythical being such as a werewolf, vampire, warlocks, fairies, mermen, and even trolls. In an attempt to make light of these novels and the fame they receive, Alex, together with co-author, Ezra Fox, published Unwrap My Heart. The book got a decent amount of fame, with the Publisher’s Weekly calling the book “unfortunate,” a fact that Alex finds hilarious considering the book is a parody.

9. Alex has also written a Sex and the City Parody episode

Aside from his work about the Twilight parody and his comedic writing, Alex has also written and expanded on some fun ideas about possible movie and show ideas, such as his take on a Sex and the City Episode. After his book, “Unwrap My Heart” began to get more popular, and people wanted to know more about what he had written, Alex published an unseen draft of his script for a full-length Sex in the City episode. The episode features Carrie dating a mummy. Alex has brought in his love for mummies and the undead in the universe of Sex and the City as well and has told its audiences that it is a metaphor for the dangers of bringing something back from the dead. The excerpt for the script can be found on Alex Falcone’s website.

Alex Falcone is quite popular and active on Twitter, where he posts about the current happenings and his take on it. He has tweeted about President’s Day traveling in space, cryptocurrency advertisements, testosterone boosters, sea lions, and old nativity sets. Alex also interacts with fans’ and friends’ tweets on Twitter and has shared promotional content for his comedy album launch.

Alex Falcone is a talented comedian who moved to Los Angeles from Portland. He has been known for his witty and sarcastic humor by his audiences and has performed live in numerous comedy festivals. His humor focuses on finding the comforting, funny moments in life so that his audience members don’t feel challenged but entertained when they watch his live performances. Alex has also co-authored the parody young adult fiction book called “Unwrap My Heart” that pokes fun at the famous Twilight series. Alex Falcone is a multi-talented comedian who has appeared in the show Portlandia on IFC and has even done stand-up on The Late Show by Stephen Colbert. Feel free to click on any of the following links to learn more about other comedians like Alex Falcone.

Related Profiles of Up and Coming Comedians

Get to Know Comedian Steve Gillespie!