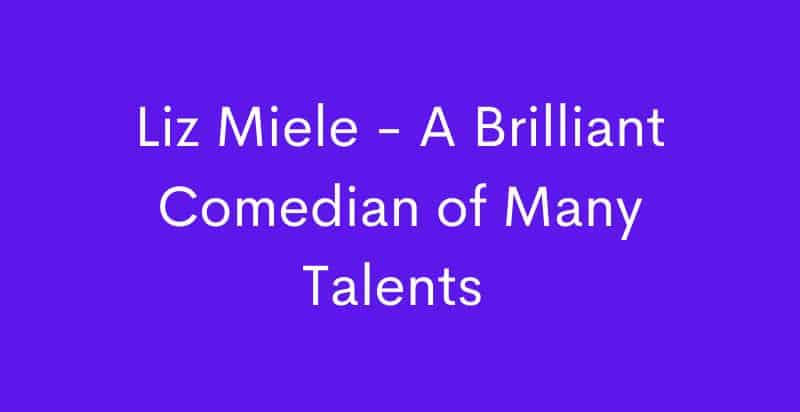 Despite being one of the youngest comedians, Liz Miele has taken the world of comedy by storm. Born in New Jersey, Liz Miele analyzes the world with a different lens and uses it in her comedy to make people laugh out loud and give them something to think about.

Liz Miele is a comedian of many talents. She isn’t bound by limitations and has explored various career paths like producing, writing, acting, and many others. We will now take a look at what makes Liz Miele so inspiring.

Being a standup comedian is just one of the labels she has successfully won. She also has her own Youtube Channel where she posts clips and videos of her hugely popular comedy routines.

One of her comedy bits, “Feminist Sex Positions,” went viral a couple of years ago and has millions of views. Many of her videos have also gone viral and have been viewed millions of times.

2. Liz Miele Has Produced the First Season of Her Animated Web Series

Liz Miele launched her animated web series “Damaged,” which she wrote and produced the first season.

The central plot of the web series is about robots that are adopted by humans. The web series explores themes of abandonment, self-awareness, and the mental and emotional exhaustion life can give you.

When Damaged was released, it received universal praise from fans and critics alike. Not only was the      voice acting behind the characters amazing, but people also complimented the writing behind each episode. Liz Miele has successfully mixed comedy with mature themes, which is always a huge task for even veteran comedians.

The success of Liz Miele in the field of comedy has led to working together with many famous comedians like Maz Jobrani, Hari Kondabolu, Joe Machi, Dean Edwards, Jermaine Fowler, DC Benny, Ted Alexandro, and many others. Some of her collaborations included stand-up comedy as well as starring  in them for her web series “Damaged.”

4. Liz Miele Has Her Own Podcast “2 Non-Doctors”

Together with her friend and fellow comedian Maria Shehata, Liz Miele has her weekly podcast. In a world where vulgarity and “dank” jokes seem to be on the rise, her podcast actually contributes towards something positive.

She and Maria Shehata talk about health, human bodies, and life in general. While it is quite popular and funny, viewers will also find many informative and relatable content, which is generally loved by their fans.

5. Liz Miele Doesn’t Let Her Dyslexia Stand in Her Way of Comedy

If you thought Liz Miele couldn’t get any more inspiring, you were wrong. The comedian has dyslexia, and it was a huge barrier in her childhood. However, once she found herself interested in comedy, she was dedicated to making a name for herself no matter what. Liz Miele is a huge advocate of expressing your ideas and emotions healthily as she believes this is how she copes with her learning disability.

Moreover, Liz Miele suffered a lot in her life. She has been through many breakdowns, but she always managed to pull herself through her dark times. Liz uses her comedy not just to make people laugh but also to inspire them.

Liz Miele isn’t just your average stand-up comedian performing in clubs. Her rapid rise to fame led her to be featured in Comedy Central’s “This Week at the Comedy Cellar, Hulu’s “Coming To The Stage,” AXS TV’s “Gotham Comedy Live” and NPR’s “Wait Wait Don’t Tell Me.” She was also featured in the March 2015 issue of Runner’s World.

7. Liz Miele Has Written a Book on Cats

For all the cat lovers out there, Liz Miele is a cat lover herself. However, she has gone up and beyond to write a successful book titled “Why Cats Are Assholes.” Liz Miele comes from a family of veterinarians, and she provides unique insights into the history of cats and their psyche.

The book has an exciting mix of hilarious anecdotes, useful tips, and behavior explanations of why cats act the way they do. Readers of this book will be better prepared to deal with their cats and, consequently, make their cats themselves fall in love with their owners.

Here is a video where Liz Miele shares her experience on the popular dating platform “Tinder.”

Liz Miele is truly a comedian who knows no limits. Her commitment to excellence and the way she stands bravely in the face of obstacles is inspiring, to say the least. Her sharp wit and unreserved boldness will definitely take her a long way in the field of comedy.