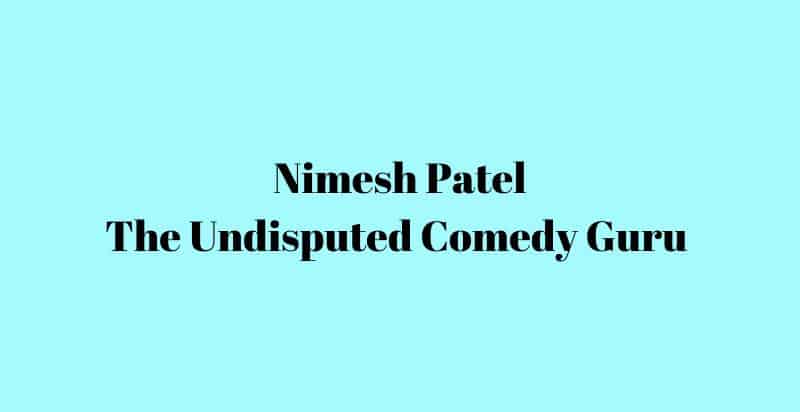 Nimesh Patel is a popular American comedy writer and standup comedian who was born in New Jersey. The talented comedian is no less than a prodigy and his knack for the funnies has made him the first Indian-American writer to work on Saturday Night Live.

8 Astonishing Facts about Nimesh Patel You Should Know

1. The Talented Comedian Was Discovered by Chris Rock

Christopher Julius Rock is a stand-up comedian, filmmaker, director, and actor from the United States. Rock rose to notoriety when he was cast as a member for Saturday Night Live from 1990 to 1993 after investing years performing as a stand-up comedian and doing minor film appearances such as Beverly Hills Cop II.

After Nimesh graduated in 2008, he started working a day job while also doing standup comedy at night. During one of his standup performances in Greenpoint, Brooklyn, in 2015, Nimesh was discovered by Chris Rock who instantly fell in love with his scripts and brought him on as a part of his writing team.

Saturday night live is perhaps one of the most popular and oldest comedy TV series in America produced by the NBC network. Each episode of the show involves comedians, musicians, actors, and other famous artists getting together for a night of musical and comedic performances which include short skits inspired by current, and often, even ridiculous topics.

The show first aired in 1975 and to date, has featured some of the biggest names in the entertainment industry throughout its more than 47 year long run which still appears to be going strong.

Nimesh Patel worked on the show from 2017 to 2018. During that time, the comedy writer helped write 21 great episodes. Being a writer on a show that has won 206 awards, 86 of which are Primetime Emmys, and a total of 526 nominations, is truly one of his greatest career highlights.

3. The Comedy Guru Wrote for the 88th Academy Awards

The Academy of Motion Picture Arts and Sciences (AMPAS) presented the 88th Academy Awards on February 28, 2016, at the Dolby Theatre in Hollywood, Los Angeles. The award ceremony was dedicated to honoring the best films of 2015.

AMPAS presented Academy Awards, more commonly known as Oscars, in 24 categories during the ceremony. The award ceremony was produced by Reginald Hudlin and David Hill, was directed by Glenn Weiss, and broadcast by the American Broadcasting Company (ABC) in the United States. The ceremony was hosted, for the second time, by Chris Rock, who had also previously hosted the 77th ceremony back in 2005.

Being a part of Chris Rock’s writing team, Nimesh Patel co-wrote the material presented by the award host at the ceremony. The script was an absolute gem and was a true testament to Patel’s skill for comedy writing.

4. Patel Has Been Featured on Late Night with Seth Meyers

Late Night with Seth Meyers is a popular American comedy talk-show hosted by Seth Meyers. The show is produced by Universal Television and Broadway Video, which premiered on February 24, 2014. It is the fourth iteration of NBC’s Late-Night franchise. The show has released over a thousand episodes featuring some of the most renowned celebrities in showbiz.

Late Night with Seth Meyers has also won the Broadcast Film Critics Association Awards for the category of best Talk-Show for two consecutive years in 2020 and 2021. In addition, the TV series is a six-time Emmy nominated show.

Patel was featured on season 5, episode 136, of the show on July 17, 2018. The comedian delivered a short yet hilarious standup performance based around him getting roasted by his mother. Actor Joel McHale and the singer and songwriter Beth Ditto were also featured on the same episode.

5. The Hilarious Comedian Has Written for Hassan Minhaj

On April 29, 2017, Hassan Minhaj – an American writer, comedian, actor, political commentator, and producer – hosted the 2017 White House Correspondents’ Association Dinner, a two-hour TV special in which the host made witty and comical remarks regarding the Trump presidency and the current White House administration at the time.

While the material was presented by Hassan Minhaj, Nimesh Patel was one of the few comedy writers who helped the host compose and compile the material.

@midnight with Chris Hardwick is a popular American panel game show inspired by the late-night theme. The show aired on Comedy Central from October 21, 2013 to August 4, 2017 and was broadcast Monday through Thursday.

Each 30-minute episode of the show, hosted by the talk show host, Chris Hardwick, aimed at imparting the viewers with hilarious facts and information regarding the internet all the while talented comics would partake in fun games. The show was brought to life by the witty remarks and comments of the host and the gifs, videos, photos, and other media featured on the show, most of which being drawn from the dark corners of the Internet.

Nimesh Patel was invited on this two-time Primetime Emmy winning show on April 25, 2017 on what was the 95th episode of the show and its 4th season. The comedian was accompanied by the standup comedian Orlando Jones and actress Arden Myrin.

A hilarious American TV series, Comedy Knockout is a standup comedy game show that debuted on April 21, 2016. The show involved standup comedians competing in a comical and thrilling standup competition where they’d perform scripts and would get scored based on the audience’s reaction. The show aired on truTV and was hosted by Damien Lemon. The performances would often include roasting other comedians on and off the show.

Nimesh was featured on the 10th episode of the show, season 1, on June 23, 2016 where he competed against the comedians Nick Turner and Jamie Lee.

8. The Comedian Is Inspired by Various Veterans and Contemporaries

Believe it or not, but Nimesh Patel is highly influenced and inspired by other comedians in the industry. Some of his comedy idols include Chris Rock, Patrice O’Neal, and Larry David.

Zach Noe Towers – An Entertainer Through and Through!

Nimesh Patel is a man with not just talent, but also great skill for comedy and this has allowed him to garner the attention and recognition of some very big and established comedians such as Chris Rock. As such, the comedy world has some very high hopes for this underrated comedy star. If you haven’t seen Patel’s performances, we highly recommend that you do. The man will have you rolling with laughter for sure!

Kiran Deol: A Standup Comedian Who Does More Than Just Comedy

Pinky Patel – A PTA Mom and a Comedian?