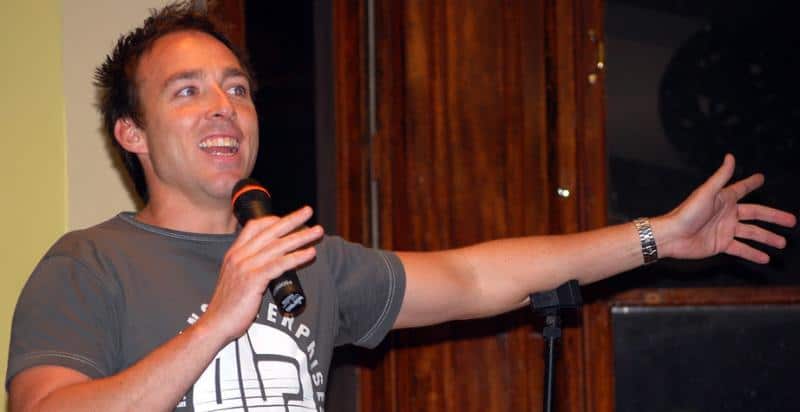 Eddie Ifft, internationally renowned for his quirky jokes and masterfully delivered punch lines, hails from Pittsburgh, Pennsylvania, where he graduated from Fox Chapel Area High School and later went on to become a member of the Delta Tau Delta while studying at the University of Pittsburgh.

After his graduation, he moved to New York City, where he got the ball rolling on his comedy career performing on the club circuit. He now lives in Venice Beach, California.

He is now a world-famous standup comedian, writer, and actor who has performed in more than 15 countries in front of sold-out crowds and has also won numerous awards on the way.

From being a frat boy as a university student to making large audiences laugh their heads off, this up-and-coming comedy king has come a long way, and there are a number of interesting facts pertaining to his career that are worth noting. Spanning from achievements and milestones to everything in between, this blog covers all you need to know about Ifft.

Whether you’re a comedy fan, someone who’s looking to book a comedian for an event, or just want to get to know more about a comedian you’ve only watched a few times, this blog will walk you through all the fun facts there are to know about Eddie Ifft. So, without further ado, let’s begin!

The following are some of the many facts about comedian Eddie Ifft, mostly related to his career as a standup comedian, actor, and podcaster:

1. He Has Several Awards and Achievements to His Name

It’s no surprise that this standup comedian has created massive havoc in the world of comedy with his aggressive yet funny and insightful comedy style, but did you know he has earned several awards and achievements for his sharp humor? For example, in 2006, he participated in the MySpace/TBS “Standup or Sit-Down” Competition and was amongst the five finalists.

The “underrated comic” has also been featured in GQ Magazine, where two of his jokes appeared in the list of Top 75 jokes of all time. The features jokes appeared at #10 and #39 on the list.

2. He Has Hosted, Co-Hosted, and Appeared in Numerous Podcasts

The audience loves Eddie Ifft because of his love for talking freely and highlighting the quirks of Pittsburgh. His sarcastic tongue has landed him a spot in several podcasts since he commenced his comedy career. The only show banned from iTunes for featuring offensive content; Talking Sh*t is one of the most popular podcasts co-hosted by Eddie Ifft.

He is also the host of The Bingle Show, which was produced in 2016 following a crowd-funded success on Kickstarter.

The fund was used to purchase a used “short bus,” which was to be transformed into a mobile studio for the podcast. The podcast was a success around the world after the campaign managed to raise about $60 thousand dollars.

In a Tweet he posted earlier in June 2022, Ifft announced he’s not only going to go on an Australian tour but will also start a video podcast featuring celebrities and comedians. He asked his followers to suggest a name for his upcoming podcast and received numerous interesting suggestions.

3. He Has Acted in, Written for, and Appeared on Numerous TV Shows and Movies

Known to make people laugh and squirm at the same time, Ifft has appeared in numerous movies, podcasts, and television shows as himself. Additionally, he has also appeared in short films and television series as an actor and has about five writing credits to his name.

His DVD, Live From Australia, which featured him performing live in front of a sold-out crowd at the Sydney Opera House in Sydney, Australia, made rounds in the comedy realm as a masterpiece. Later, he also followed up with another DVD; I Love P***y.

4. The American Comedy Star Is Well-Liked In Australia

His fame and popularity are not restricted by borders; this American standup comedian is also loved by the Australian crowds. So much so that he has appeared in several Australian television shows, including Rove, Thank God You’re Here, The Footy Show and Good News Week.

Globetrotting comedian and podcast host Eddie Ifft opens up about what it was like to get off tour and lay down roots in one of the most beautiful but dangerous places in the world; Malibu, California.

If you want to watch the comedian performing standup in front of a live audience and get a glimpse of what his comedy is all about, this video will be the perfect place to start. Watch the following video now:

When Did Eddie Ifft Start His Comedy Career?

Eddie Ifft commenced his comedy career after graduating from the University of Pittsburgh when he moved to New York City, New York.

Where Does Eddie Ifft Live?

Eddie Ifft considers himself to be a nomad. Although he currently lives in Venice, Los Angeles, California, United States, he has also spent half of his time in Australia as well as six years in London.

His hometown is Pittsburgh, Pennsylvania, and he also briefly lived in New York City, New York, where he began his comedy career.

How Old Is Eddie Ifft?

Where Can I Listen to Eddie Ifft’s Podcasts?

All information regarding Eddie Ifft’s podcasts is available on his official website. You can find information about his current podcasts on eddieifft.com/podcasts/

With numerous awards, nominations, achievements, and appearances in television shows, movies, and podcasts, Eddie Ifft might be one of the most underrated American comedians.

While he has several instances where some of his audience members left the venue after getting into an argument over what they thought was an offensive joke, he has amassed thousands of fans who love him for talking freely, his sarcasm, and the way he highlights the quirks of Pittsburgh.

If you want to stay up to date with all the latest happenings in Eddie’s personal life and comedy career, you can follow him on YouTube, Twitter, and Instagram. To learn more about other up-and-coming comedy kings and queens, be sure to check out the links below!

Other Comedians Worth Knowing

Jared Goldstein Is All About Talent & Quirks

“Eddie Ifft at The Edge” by tigitogs is licensed under CC BY-NC-ND 2.0.