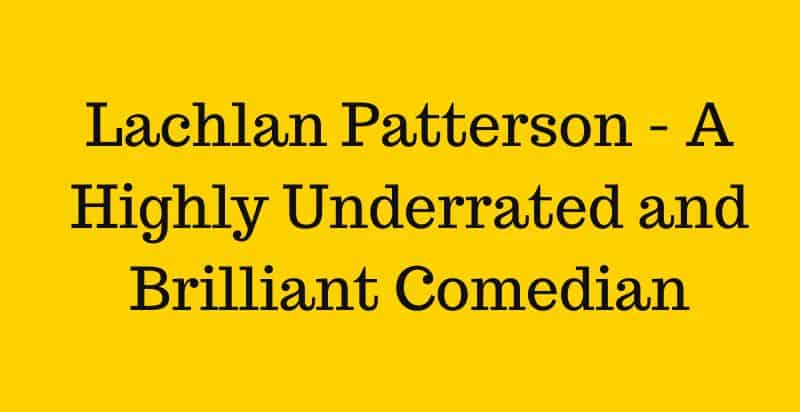 Lachlan Patterson is a Canadian writer and actor who also dabbles in standup comedy. His TV debut was on the Tonight Show with Jay Leno which was an immense success. Following this, he began to receive invitations and requests from many cities in Canada and the United States.

Lachlan’s humor style involves an element of dry sarcasm featuring razor-sharp commentary on various aspects of life. We will look at some of the most interesting facts about this standup comedian.

1. Patterson Is Inspired by Comedic Legends Around the World

Lachlan Patterson has expressed open admiration for comedians like Chris Rock, Dave Chappelle, Jerry Seinfeld, Louis C.K., Bill Burr and others, all of them legends in standup comedy. Patterson said while he is certainly inspired by the above-mentioned comedians, he wanted to bring out his own style and not emulate anybody.

However, his fans often tell him of how he resembles one comedian or the other in his comedic style. He considers this as a huge compliment because he himself is a big fan of all those comedians.

Lachlan Patterson has a weekly podcast named “The Kooks of Komedy”, hosted by him and renowned comedian Joe Praino.

The Kooks of Comedy is a brilliant podcast that is a combination of comedic anecdotes and surfing advice!  What is amazing is how skillfully Lachlan and Joe balance comedy and surfing since they are both highly adept in them and can easily analyze their similarities and differences.

The show is full of hilarious insights into their daily lives and the adventures they have experienced. The podcast is a great way to pass time while you are traveling to work or study. You can easily get envious of all the adventures they talk about.

Arguably, the best part of the podcast is their segment, #kokuestions. This is the opportunity for their audience to interact with them and ask questions. Both comedians take the time to listen to their fans respectfully and engage with them in a fun, interactive way, instead of bashing or belittling them just to gain clout (something quite common these days).

The Kooks of Komedy is a popular podcast and deservedly so. Regardless of you not being interested in surfing, you will definitely enjoy their talks which will send you into fits of laughter.

3. His TV Debut was on Tonight’s Show with Jay Leno

Tonight’s Show with Jay Leno was a popular show in the United States, which has been nominated for Emmy Awards ten times between 1993 and 2005. Lachlan Patterson was invited on this show on February 7, 2011. He was given just four and a half minutes to do his performance which received a huge applause from the audience.

4. Lachlan Was the Runner-Up on Last Comic Standing, Season 8

At the age of 19, Lachlan Patterson never thought he would be in the top 3 of Last Comic Standing yet his comedic brilliance did indeed bring him fame. He had said he was happy if he came third since he believed himself to be an underdog in comedy. Being the runner-up was a delightful surprise for him.

Last Comic Standing was NBC’s most popular comedy competition which premiered its first season in 2003 and went on to Season 9 in 2015. The series was judged by notable comedians like Norm Macdonald, Russel Peters, Rosanne Barr and others. During his performances, Lachlan was highly praised for his writing and delivery, with Rosanne Barr going so far as to say Lachlan “could take this whole show”.

While Lachlan Patterson’s overall comedic routines are appreciated, it is his writing and his delivery which sets him apart from others. During the competition, his performances were notable for wit and style and although he didn’t win the first position, he made a huge leap in popularity. The very next day after the show ended, he was invited to perform in Nashville, where he got a standing ovation.

5. Lachlan Patterson Has His Own Audiobook

One of his most famous works is “Jokes To Make Love To”, an audiobook that can leave you in stitches. The audiobook is often said to lead you into a state of relaxation while his comedic lines will erase all your worries for the moment. Though it is his debut album, the delivery of his lines is spot on so much that it can rival veteran comedians.

One of his key traits is how he is able to relate to his audience with laser-sharp accuracy. When listening to his jokes, you will often nod and laugh along with him without no preparation whatsoever. “The Internet’s too big” he says at a point but then continues on to: “If you make a spelling mistake, that’s another website.”

For his first two comedy specials, Lachlan had agreed to filming them with production companies but he later felt uneasy about the contractual terms. He then decided to produce this third comedy special “Dark White” himself. It was shot in Huntington Beach, California and was shot in one set.

Lachlan took two years to write the set and a year more to refine it up to his expectations. Once “Dark White” was shot, he got in touch with an editor and a sound engineer along with various other post production crew members to get the whole set complete.

Dark White is mostly about Lachlan’s noticeable lack of challenges that he faced in his life. He attributes this to his being a white male. While the lack of challenges would appear desirable, Lachlan discusses how this itself became a hurdle for him down the years and how he changed his perspective of life.

7. The Rising Comedian Has Performed in Several Comedy Festivals

After performing his very first show at the age of 19, Lachlan Patterson spent many years learning the art of standup comedy and applying it to his routines until he perfected it. He then decided to start his tour of Canada, gaining followers and fans along the way. His comedic genius led him to several comedy festivals like Montreal’s Just for Laughs, the Halifax Comedy Festival and the Aspen Rooftop Comedy Festival.

The New Old People Are Going to Suck | Lachlan Patterson

Ever wondered how this generation will be when it grows old? Spoiler alert, a little pathetic.

Lachlan Patterson is all set to conquer the world of comedy. He has achieved tremendous growth in his career and is continuing to grow his fanbase. It is a true delight to see how an aspiring comedian is making steady progress making everyone laugh!