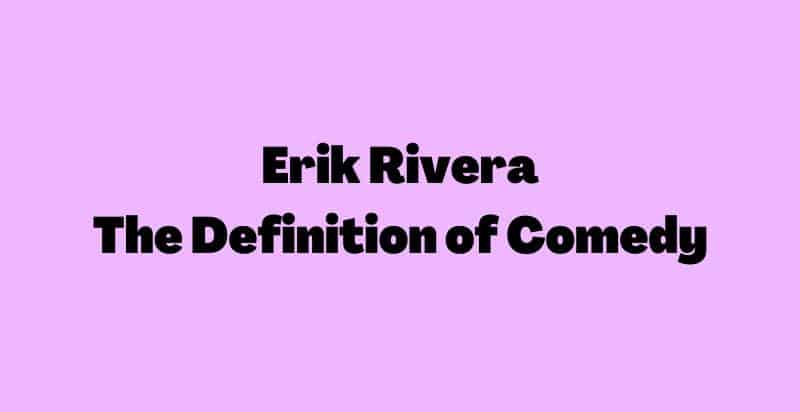 Erik Rivera is becoming an increasingly familiar name in the comedy industry owing to the somewhat wild and hysterical personality of the comedian. Having performed on some of the most reputable comedy forums, Rivera’s career has finally gained traction and it’s safe to say that the comedian is headed to the top.

Intrigued? Join us as we take a look at some of the most noteworthy achievements and facts surrounding Rivera’s career. Fasten your seatbelts and let’s dive right in!

1. The Hysterical Guy Has Starred in Living with Funny

Comedy is not the only thing this up-and-coming superstar can do, he’s also a great actor and his performance on Living with Funny testifies to this. Living with Funny is a never-before-seen behind-the-scenes documentary into the offstage lives of two comedians.

The TV series lasted for a single season and six episodes, spanning from April 12, 2016 to May 17, 2016. Eric Rivera is one of the lead characters in the documentary and is one of the two comedians whose life the documentary follows. The other comedian in the series is Brandon T. Jackson.

Superior Donuts is an American comedy sitcom TV show that was broadcast on the CBS network from February 2, 2017 to May 14, 2018. The Show followed the story of an old and sympathetic man named Arthur – owner of a doughnut shop – and his young and spunky employee running a doughnut shop in a culturally diversifying Chicago neighborhood.

The TV series was based on Tracy Letts’ identically-named play. Goldman-Donovan Productions, Teitelbaum Artists, and Daily Productions produced the series in collaboration with CBS Television Studios. CBS announced a second season for the show on March 23, 2017, and it aired on October 30, 2017. CBS canceled the show after 34 episodes and two seasons on May 12, 2018.

Erik Rivera was featured on the show on April 30, 2018 where he played the role of Rafael – Sofia’s undocumented brother who’s about to be deported back to Columbia.

3. Rivera Has Performed in Various Comedy Clubs Across NYC And LA

Erik’s passion and love for comedy has made him one of the regular performers in various comedy clubs throughout New York and Los Angeles including Comic Strip Live, The Comedy Cellar, The Laugh Factory, The Comedy & Magic Club, and Gotham Comedy Club.

4. The Rising Comedy Star Was Chosen to Perform on Last Comic Standing

Last Comic Standing is an American reality comedy competition and game show that aired on NBC from 2003 until 2010. The show was relaunched back in 2014 and ran up till 2015, concluding on its 9th and final season. The program’s purpose was to find a comic from among a wide number of aspirants.

Erik Rivera was among the 100 contestants chosen to perform on relaunch, 8th season, of the show. The season aired on May 22, 2014 and was hosted by JB Smoove. The season lasted for 13 episodes and the winner received a $250,000 cash prize. Unfortunately, Rivera could not make it to the finals.

5. Rivera Made His Late-Night Debut on The Tonight Show with Jay Leno

The Tonight Show with Jay Leno is an American late-night talk show that initially ran from May 25, 1992, to May 29, 2009. Hosted by Jay Leno, the talk-show was the fourth iteration of the NBC’s Tonight Show franchise.

The series resumed filming on March 1, 2010 and concluded for the final time on February 6, 2014. The show followed the same general format as its predecessors which consisted of an opening monologue followed by interviews, comedic performances, celebrity appearances.

The show had 22 seasons that entailed a total of 4,600 episodes. Erik Rivera made his late-night debut on May 20, 2011 when he was featured on the show as a guest comedian. Other artists featured on the episode included Kirstie Alley and Rickey Minor.

Carmen Morales – Comedy in All Its Glory

Perhaps one of Erik’s biggest career feats is that he has performed at Just for Laughs comedy festival held in Montreal, Canada. Founded in 1983, Just for Laughs is the largest international comedy competition in the world and is held each year in July.

Comedians come from all over the world to compete in this fast-paced and hilarious standup competition, which almost spans over a week. The festival even has a television division, with tapings from the event airing on branded specials and shows.

The comedic personality has been achieving milestone after milestone in his comedy career and perhaps one of the biggest achievements the man has made is being featured in a comedy TV special by HBO.

This exclusive, hour-long TV special by HBO was called Entre Nos: Spot On in which four of the most enticing, young Latino comedians in the industry are invited on stage to talk about their hysterical experiences about love, life, and being Latino. The four comedians featured on the episode were Vanessa Gonzalez, Crystian Ramirez, Rojo Perez, and, of course, Erik Rivera.

The episode featured on April 26, 2019. In his performance, Rivera talks and jokes about his wife turning him white, different levels of being white, and much more.

8. The Comedy Star Has His Own Comedy Special

Checking off another achievement from his list, Erik Rivera wrote and starred in his own hour-long TV special by the name of I’m No Expert. In his first ever comedy special, Erik showcases his skills and talent on center stage by riffing on fatherhood, love, and his crazy extended family.

The TV special came out in 2015 and was directed by Manny Rodriguez. The Comedy special streamed on all major streaming channels such as Apple TV, Google Play, and Amazon.

While it’s true that Rivera still has a long way to go to become one of the high-rollers in the comedy and entertainment industry, we can say with some certainty that the artist has been making good progress and is well on his way there.

If you aren’t familiar with his work, we highly recommend that you check it out and you’ll surely fall in love with his art, just like we have!

Armando Torres – Learn about This Super-Sweet Comedian from Funhaus