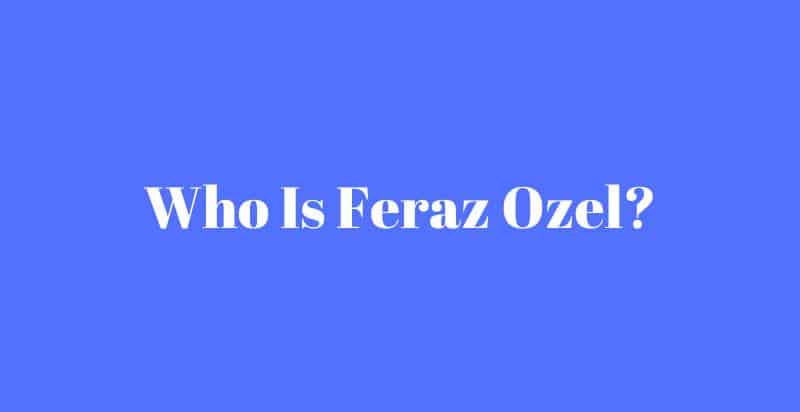 Feraz Ozel is a comedian who is rapidly rising in popularity within both comedic and movie circles. Having turned down the opportunity to attend law school at 21 just so he could pursue standup comedy, Feraz is a true symbol of a person doing something he is passionate about. However, comedy is not his only forte. Feraz is an avid writer and has even directed and produced some documentaries and short films.

He went to college at UC San Diego and since that time he started doing open mic sessions around town. In his own words; “the journey has been smooth, by medieval standards. As in the bumpiest road imaginable, often seeming to end abruptly or not even resembling a road at all.” Although he comes from an affluent family, he struggled on his own in a 1 bedroom apartment before he was able to hit calmer waters. Today Feraz Ozel is a renowned name in the industry.

1. Comedians and their missing date of births

We have no idea of the secret behind it but comedians and their date or places of birth are well-hidden. Be it Chris Millhouse or Feraz Ozel, the internet has no information regarding when they were born, how old they are, or where their hometown is. What’s surprising about this fact is only the part about how these guys manage to keep this information hidden at a time when the internet knows all our deepest, darkest secrets.

Feraz, in an interview given to VoyageLA stated that he was born and raised in the US. Also, his website states that he comes from an Afghani-Pakistani origin which means that his parents come from either of these two places. This is all that we know about his parents. Much like Feraz’s date of birth, the identity of his parents and other information about them is missing completely. Still, we know a little bit about his siblings.

3. His brother is a chiropractic doctor

Feraz has two siblings, a sister and a brother. There is no information about who is younger and who is elder but all we know is that his brother’s name is Umer Ellahie and the guy is a chiropractic doctor. The two brothers have contrastingly different lives with one following the path that many comedians joke is the ‘traditional’ path for any “brown” individual to pursue but the other becoming an artist. The family dinners would certainly be interesting.

With much of the information regarding his personal life hidden, Feraz lives a relatively quite and private life. He doesn’t post anything about his family on social media and manages to slip under the radar. Many people try hard to peek into other people’s lives especially when things are being kept a secret. This is wrong and if a person wants his family and personal life to stay away from the limelight, we should absolutely respect that.

5. His obsession with standup started at the age of 8

When talking about his journey with VoyageLA, Feraz stated that his inclination towards comedy started at the age of 8. He was watching and became inspired by people like George Carlin, Dave Chappelle, and Greg Giraldo and soon he began stepping up on stage himself. This is the reason that as soon as he joined university, he started doing standup shows. The first couple of years were not a smooth ride for him but soon he began gaining fame not just locally but internationally as well.

6. He is a man of many talents

Feraz’s first love has always been comedy but he has adorned numerous hats over the years. Besides regularly performing at comedy clubs, he also writes not just jokes for his shows but also other content like movie scripts, TV show episodes and documentaries. At the same time, he has also directed and produced several movies and documentaries. He has acted in movies like 2 Broke Girls, My GF from Hell, and Hollywood Darlings to name a few.

7. His resume is impressive

8. One of his movies was distributed by Kevin Hart’s LOL Network

Feraz’s directorial movie that was launched recently, Curious Georgina was distributed by Kevin Hart’s LOL Network. The movie starred Feraz Ozel himself and Bobby Lee. The movie was also screened at Just for Laughs in Montreal.

9. Feraz was recruited by the CIA but turned it down for a life in comedy

Besides turning down a degree in Law, Feraz was also recruited by the CIA. As crazy as it sounds, the comedian has confirmed this fact many times himself. However, his natural answer to the offer from the leading intelligence agency in the US was no! His love for comedy transcended all and there was nothing that was going to stop him from it.

10. He has featured in the LA Times, Rolling Stone and blogs like LADBible

The achievements that Feraz has accumulated over the years are extremely illustrious. These milestones have been highlighted by some of the leading publications in the country. These include both print magazines and digital blogs. The leading names that have done pieces on him or used his work include LA Times, The Atlantic Magazine, Rolling Stone, NowThis, and LAD Bible to name a few.

Chris Grace – Get To Know This Multi-talented comedian

11. He has some prestigious awards to his name as well

Feraz Ozel is rapidly gaining popularity especially with respect to his work. His comedy stints in particular have enabled him to win awards like San Diego’s funniest person competition and the Funzine comedy competition in Budapest. His work enables him to gain recognition not just at home but internationally as well which is allowing his career to bloom giving him extensive roles and fame.

Feraz is active on a number of social media platforms like Instagram, Twitter, YouTube and TikTok. Although his fan following is not very huge, his work is still highly appreciated and widely shared with his videos having more than 20 million views across the internet. On Instagram, he has 3.6K followers as of January 2022. On TikTok, he has 606K views while his Twitter account has 3.8K followers on Twitter at this time.

13. He has a girlfriend and that’s all we know about her

Feraz occasionally shares humorous and romantic pictures with his long-term girlfriend on Instagram. However, he refrains from sharing any other information about her like name or how long they have been dating and future plans if any. This makes it impossible to know anything regarding the whereabouts of the love of his life.

14. He currently lives in Los Angeles

Feraz currently resides in Los Angeles and despite traveling frequently to different parts of the world for work or fun, he is based in the state as a permanent resident. The guy enjoys traveling, hiking, skiing while also sharing a love for dogs and other pets. He has a vibrant life that he shares glimpses of with his social media followers from time to time while also giving them humorous puns to enjoy on a regular basis.

15. Feraz also does international performances on a regular basis

Since he has won a prestigious award in Budapest, we know that Feraz performs regularly on international events as well. He has highlighted this himself at numerous occasions and this is the reason he has been gaining extensive fame all across social media.

Feraz Ozel is a comedic genius despite having numerous other roles that he enjoys. Here is a small clip from one of his comedy shows which offers a glimpse into his talents and how well his puns are written and delivered in a way that captivates audiences a lot. Check out the clip from his show here;

Feraz Ozel is a comedian, writer, director, producer and actor who has made a name for himself over the years. Today he is amongst the most versatile stars especially in the comedy genre. He is balancing several plates at the same time enjoying the fruits of his struggles during the early days. If you are intrigued about his life and his work, do give him a follow on his various social media platforms.

Get to Know the Hilarious Paul Farahvar

Adam Gropman is Here to Make You Laugh!