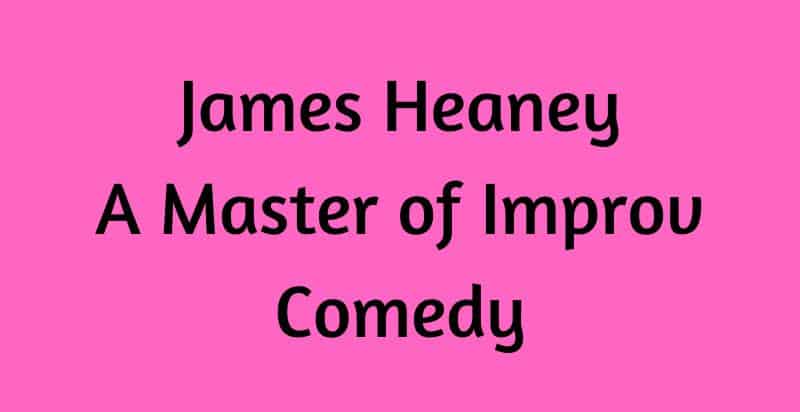 Few names in the world of comedy are as multi-talented as James Heaney. He is not just a comedian but also a musician, teacher, and actor. He has a natural talent for making people laugh out loud. His success and comedy style have led him to conduct workshops in improv comedy.

James Heaney has taken on various roles in life. His wit and over-dramatic lines have made his fans love him even more. Let’s look at why James Heaney truly deserves our appreciation.

1. James Heaney Has Mastered the Art of Improv

James Heaney specializes in improv comedy. His comedic routine consists of over-the-top lines which often border on being hilariously absurd. He plays a lot of different characters, all of them having their own unique personality and he uses these characters to drive his comedy scenes forward.

His characters often display extreme cowardice or emotionality, which sets the audience laughing. He often directs his scenes in a completely ridiculous direction and does this by forgetting or misremembering things, pronouncing words wrong, or even by not understanding the motives of others.

2. James Heaney Started His improv journey in the 1990s

James Heaney received his improv training from Chicago’s Second City in the late 1990s. After several years, he got the chance to become an assistant teacher to teach Improv 101 in a class conducted by Brian Posen.

During this time, he also joined Low Sodium Entertainment. This improv company used to hold late-night shows and touring shows which were completely sold out.

This was the period where James Heaney had begun to make a strong name for himself in improv comedy.

James Heaney started his own improv troupe, The Original Understudies. He led this troupe for five years, following which he began studying improv at the Westside. His teachers included the famous Jeff Michalski, who has more than 20 years of improv expertise.

He never stopped studying in his career. His improv journey led him to meet with some renowned comedians like Anni Hoff, Lloyd Ahlquist, and Mike Betette. Lloyd Ahlquist was instrumental in refining James Heaney’s improv techniques.

4. James Heaney Has Recurring Appearances on the Podcast Alchemy This

Alchemy This is an entirely improvised comedy podcast created by Kevin Pollak, an award-winning comedian. Kevin, along with several other comedians, including James Heaney, features various unique and hilarious scenarios which are often suggested by fans themselves. Among all the comedians, James Heaney is the one who has appeared most often in Alchemy This.

James Heaney is often known as “The Real James Heaney” or “The Hean.” Kevin Pollak has often made light of this aspect. He and James had a recurring gag where Kevin asked him if he could refer to James by a ridiculous nickname when introducing him. James would then give a hilarious and awkward response.

5. James Heaney Is the Former YouTube Personality for GameFront

GameFront is a website for video games. It provides many patches, mods, demos, and various other user-generated content pertaining to games. The YouTube Channel features various video series in which James Heaney plays and reviews different video games.

His humorous side doesn’t fail to make its appearance and makes the experience worth watching. His funny, often absurd commentary will always set you laughing as he does his usual bizarre antics with the video game characters.

Apart from having his own podcast, “Brief News Brief,” James is also famous for being a renowned teacher of Improv. He first started teaching Improv at Westside Comedy Theater in Santa Monica and has continued to teach it for more than 10 years. Moreover, he has conducted several workshops on improv and team building in various festivals and institutes all over the United States.

Here is a video of James Heaney performing at the Westside Comedy Theater in Santa Monica, California. It was part of the Westsides O.G Smoke Break “420” show produced by Will Crespo and sponsored by Exhale (Medical Marijuana Clinic).

James Heaney is truly an expert at improv. His charm and wit coupled with the absurdity of his characters and lines make him an absolute riot to watch.

He has worked very hard to be where he is today. He plans to continue to inspire future comedians and train them in the art of improv.