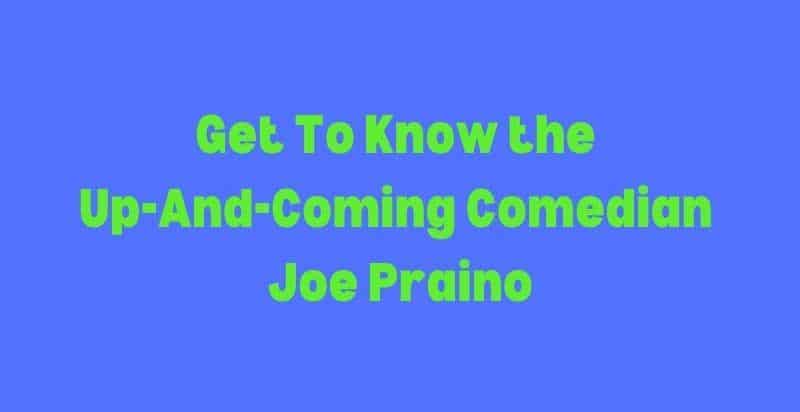 Joe Praino developed an interest in comedy and started writing jokes at a very early age. He started his career at 19 when he was studying at Lehigh University. He is known amongst his fans for writing some of the quirkiest, most clever jokes and performing amazingly well in several theaters in New York as well as Los Angeles. His delivery is what sparks the audience’s interest and completely engulfs them in what Praino has to share. With each punch, the audience feels more connected with shared laughter and great vibes.

Praino has managed to garner thousands of fans not only in the cities he performs in but also from several other cities in America due to his presence on social media. Other than comedy, Joe Praino also enjoys sports, volunteering, and surfing. He has been known to win hearts everywhere he goes, courtesy of his excellent sense of humor and incomparable knowledge.

If you’re contemplating following Joe Praino on social media or attending one of his live performances, you might want to know more about the standup comedian and actor. Fortunately, we’ve compiled a list of fun facts related to his comedy career and personal life just for you! Without further ado, let’s dive right into getting to know this up-and-coming standup comedian.

The following are some of the lesser-known facts about the up-and-coming comedian Joe Praino:

Most of his fans know him for his live comedy acts. However, if you follow him on any of his social media accounts, you might also come across some of his other works, including the two successful podcasts he owns and runs. He co-hosts the podcast named “Dirty Sports” with Andy Ruther, where you can be wowed by his immense knowledge of sports. Another podcast, Kooks of Komedy, which he co-hosts with Lachlan Patterson, highlights his experience as a surfer and standup comedian.

2. He has acted in 4 movies during his career

Joe Praino reportedly started his career in comedy way before college in 1999, when he began developing an interest in the field, specifically in standup comedy. By 2004, he had several of his own television series and documentaries and even earned credits and additional crew spots in some shows and movies. In 2008, he appeared in the film The Marconi Bros and a short video, High Times Reality TV. In 2015, he again acted in a short video and television series, Neighbors and Venice Beach Originals, respectively.

3. He majored in Journalism and Communication

Praino is able to write and deliver relatable material with exceptional delivery skills. This skill might have been a product of his time at Lehigh University, where he majored in Journalism and Communication. He also worked as the Program Director for the radio station at his campus, where he kickstarted his comedy career with the comedy/music show “The Joe Show.” During this time, he also interned at the legendary New York radio station, 102.7 WNEW-FM, working with Dan Rather and learning about the programming business.

4. He has performed at several famous locations

Praino has had the opportunity of performing at several popular comedy clubs and venues in New York and Los Angeles, including The Stand, Gotham Comedy Club, The Westside Comedy Theater, and The Improv. Additionally, he also managed to earn a spot at the Comic Strip Live and Boston Comedy Club. He also hosted his own variety show, Miscellaneous, at Galapagos in Brooklyn.

Those who have heard Praino speak at one of his standup acts are aware of the fact that Joe Praino absolutely loves talking about sports. It is because of his interest in sports that he landed a spot on ESPN Instant, where he appeared with some of his favorite commentators and analysts. He also had the honor of throwing the first pitch at a Mets game once, which is a memory he will cherish forever. Apart from that, he famously labeled golf as a sport on his “things not-to-do list,” which he now shockingly enjoys.

Praino was also a three-sport varsity athlete when he was in high school, where he played basketball, football, and baseball.

6. He was amongst the “New Faces” at the Just for Laughs Festival

In 2019, Joe Praino had the pleasure of being amongst the “New Faces” at the Just For Laughs Montreal Comedy Festival. The New Faces showcase presents up-and-coming comedians, and the category New Faces of Comedy is dedicated to standup comedians, amongst whom we saw Joe Praino’s name.

7. He wants to become a late-night talk show host

Praino’s end-game is to own his own late-night talk show, which he plans to host himself and where he wants to invite guests from different fields of work, including sports and comedy. For now, his podcasts and standup acts are keeping him busy and on track to achieve his goals.

Comedians Lachlan Patterson and Joe Praino battle it out at The RoastMasters hosted by Luis J. Gomez, with judges Mike Lawrence, Aaron Berg, Pete Lee, and Mike Recine. Take a look at the video here:

How old is Joe Praino?

Joe Praino was born in New York on July 5, 1979. He has one sister and two brothers.

How can I attend Joe Praino’s standup comedy?

All information related to upcoming events, podcasts, albums, and Joe Praino’s comedy shows are available on his website joepraino.com.

Where does Joe Praino live?

Originally from New York, Joe Praino now lives in Venice, Los Angeles, with his foster dog, Vince, and a surfing board.

When did Joe Praino start his comedy career?

Joe Praino started his comedy career in 1999, but his career took a significant turn while he was studying at Lehigh University, where he hosted his show “The Joe Show” while working as a Program Director for the campus radio station.

Joe Praino is always on the move when it comes to his comedy career. He is frequently seen on several television shows, festivals, podcasts, and even movies. The comedian doesn’t shy away from talking about sports, his embarrassing experiences, and social issues and his smart and quirky take on such topics are known to win the audience’s hearts.